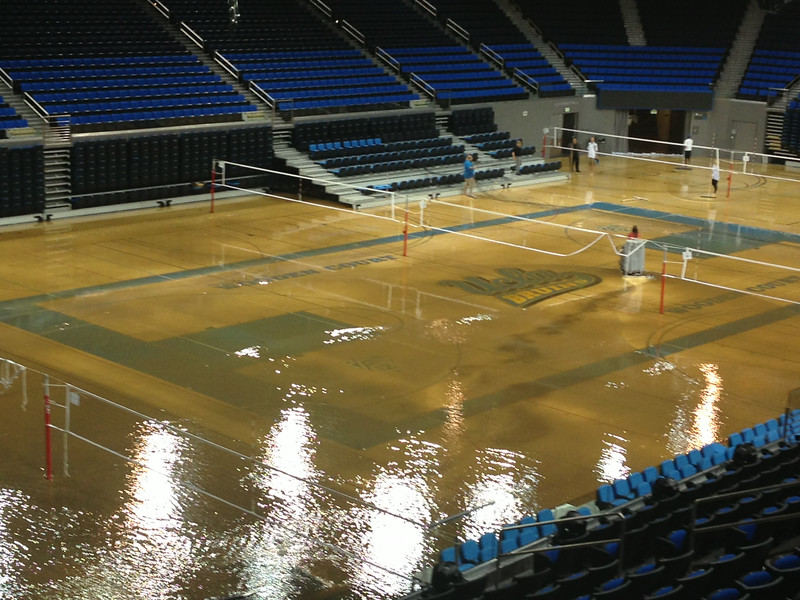 Less than two years after its $136 million remodel, Pauley Pavilion was flooded Tuesday.

The photo above, taken by the Daily News’ Gene Blevins, shows some of the damage done by a broken water main near Sunset Blvd. According to the LADWP, a total of eight to 10 million gallons of water poured out of the 30-inch pipe. It still isn’t clear how much repairs will cost, but due to a break in the pipe — originally built in 1921 — the water on the floor of the court was reportedly eight inches deep.

The Bruins start their basketball season on Nov. 14 against Montana State.

“At this hour, we are still gathering information and, to the extent possible, assessing the damage to our athletic facilities affected by the water main break,” athletic director Dan Guerrero said in a statement. “Regarding specific inquiries and concerns about Pauley Pavilion, most people are aware by now that the floor and locker rooms sustained significant flooding. The water will be removed from the floor tonight. We will then reassess the situation tomorrow morning and be able to provide additional information at the appropriate time.”

In a statement, UCLA chancellor Gene Block listed the other affected locations as: parking lots 4 and 7, Ashe Student Health and Wellness Center, the J.D. Morgan Center, the Acosta Center and John Wooden Center, the intramural field, and Bruin Plaza.

Water also covered most of the track at Drake Stadium, and reached UCLA’s locker room. Spaulding Field did not appear to sustain damage.

Trying to save the locker room from this flooding…#UCLA pic.twitter.com/nfJHYyAx2G