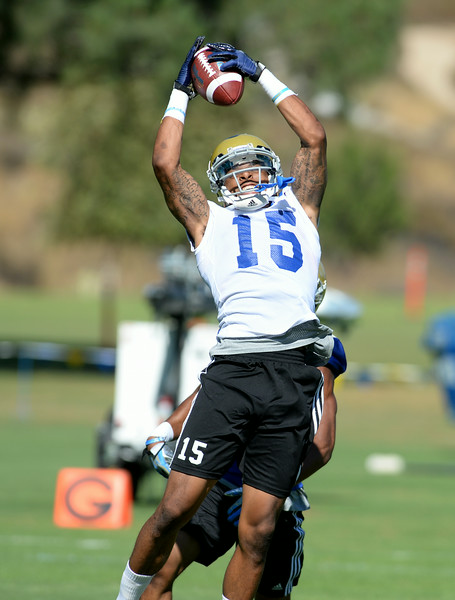 Injury concerns for a banged up UCLA football team turned more serious on Tuesday. Wide receiver Devin Lucien suffered a head injury worrisome enough that an ambulance was called to transport the redshirt junior to the hospital in the midst of practice at Cal State San Bernardino.

Arguably the best wideout for the Bruins 10 practices into training camp, Lucien was injured when he hit his helmet on the ground after making a diving catch. He left the field under his own power, eventually making his way to the trainer’s tent.

After he was treated for 15 minutes by UCLA team doctor John DiFiori, a head injury specialist, the San Bernardino County Fire Department and paramedics arrived. Lucien was then immobilized on a stretcher and loaded into an ambulance.

“I think anytime something like that happens and you seen an ambulance come on to the field of play, it’s tough,” UCLA coach Jim Mora said. “As always, we’re going to be overly cautious with anything that has to do with the head, neck or spine. That’s not a tough decision. We’re praying for him and thinking about him.”

The severity of Lucien’s head injury is unknown. Mora was unaware if Lucien was ever unconscious.

The 6-foot-1, 200-pound Encino native appeared on the rise late last season, making 10 catches for 210 yards and a pair of touchdowns over the final five games. He finished his sophomore campaign with totals of 19 receptions and 339 yards.

Lucien started three games as a sophomore but was projected to be a full-time starter this season.