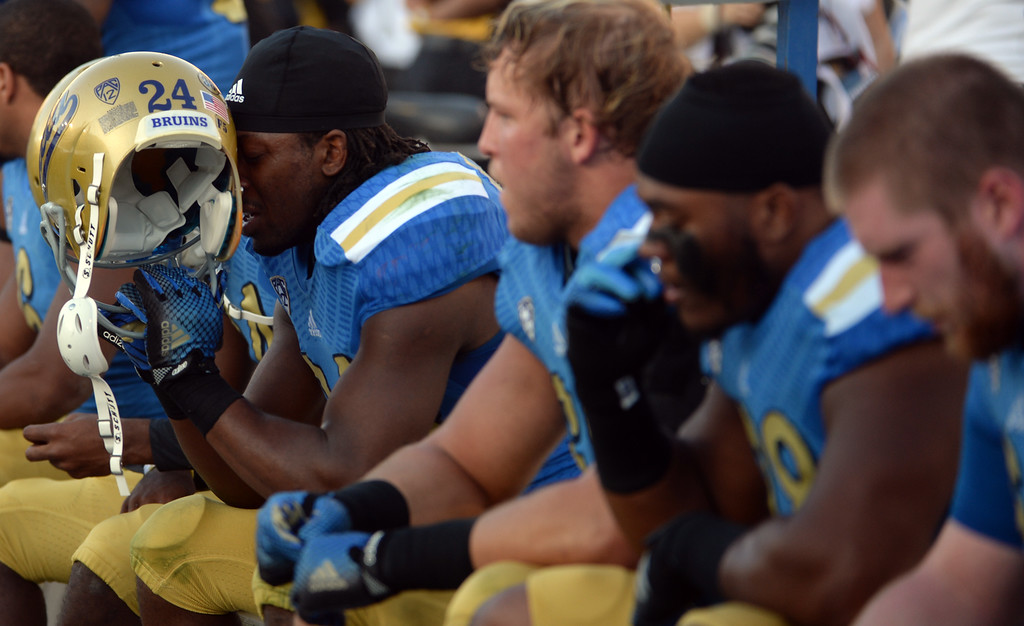 To get an accurate measure of how this season went for UCLA, there’s no better person to turn to than Jim Mora himself.

“We’re not trying to be average,” the head coach told his players back during training camp in San Bernardino. “We’re not after good. Nobody in here is going to be satisfied when, at the end of the year, people say, ‘Oh, they’re a good football team.’

“Great. Every single day, everything we do, that’s got to be our focus: great.”

By that standard, UCLA’s third year under Mora was a tremendous disappointment. There’s no masking that after a 31-10 loss to Stanford ended the Bruins’ chance at a Pac-12 Championship, though the team deserves some credit for not letting the season spiral out of control after losses to Utah and Oregon. At midseason, the Bruins were teetering. The way the team looked after ugly wins at Cal and Colorado, a nine-win season looked optimistic.

But in notching impressive wins over Arizona, Washington and USC, UCLA pushed the bar back up. Expectations rose again to a “New Year’s Six” bowl, or even the College Football Playoff.

The Cardinal ended those dreams, shaping into the Bruins’ schematic Kryptonite even in a down season. It was an outcome that should have seen Mora shouldering more blame, something I recall him emphatically doing only once this year. Instead, he again trotted out the line about the team’s youth and inexperience. Never mind the fact that UCLA had already pulled in the No. 12, No. 3 and No. 20 classes in the past three cycles, per Scout.com. Never mind that it had returned 17 starters from last year’s squad.

This wasn’t a team that was good enough to truly threaten for a national title, but it was good enough to at least be the Pac-12 runner-up to Oregon. And the way a surprisingly competitive Pac-12 South had shaken out, the Bruins should have seized a division title that — before the season — seemed like their floor.

No amount of recruiting is going to make up for the fact that UCLA is going to be relying on an unproven quarterback next season. Maybe Jerry Neuheisel, Asiantii Woulard or Aaron Sharp take a significant step forward. Maybe five-star recruit Josh Rosen wins the starting spot right away, but rarely do true freshmen immediately lead their teams to great heights.

There isn’t much at stake left in 2014 besides sending UCLA’s seniors (as well as Brett Hundley, who was honored alongside them on Friday) out on a good note. The Bruins will likely end up in the Alamo, Holiday, or Foster Farms Bowl depending on how the rest of the conference shakes out. The challenge now for the coaching staff is making sure the players can recover from a disappointing end to the regular season, and motivate them for a game none of them wanted to end up in.

» Kevin Hogan wishes he could make a career out of playing UCLA. In three games against the Bruins, he completed 74.2 percent of his passes for an average of 207 yards per game, and four touchdowns against one interception. In 29 other games of significant action, Hogan completed 64.2 percent for 196.7 yards per game, and 41 touchdowns against 22 picks. He has 9.4 yards per pass attempts versus UCLA, and 8.0 versus everyone else.

The main issue was that the Bruins wouldn’t generate pressure with a four-man rush. After producing a season-high six sacks against USC, UCLA couldn’t do anything to break past the the Cardinal’s big offensive line. (Losing outside linebacker Deon Hollins to what looked like an ankle injury didn’t help.) And if nothing else, Stanford knows how to play with a lead. Hogan only threw four passes in the second half, and Stanford finished with a 37:49 to 22:11 edge in time of possession.

“We never got them out of their running game,” said UCLA defensive coordinator Jeff Ulbrich. “When their running game is a viable threat at all times — when they’re winning games, they don’t mind running on third-and-7. When there’s always a run threat, you’ve got to defend it. When you do that, it slows down your pass rush a little bit. At the same time, we’ve got to bring him down. Got home a few times, just didn’t finish.”

» So much went wrong for UCLA on Friday afternoon, but looking back, there were two plays that could have potentially swung momentum for the Bruins — both of which came near the end of the second quarter.

With the score tied at 7-7, UCLA had a first-and-10 on Stanford’s 24-yard line. Hundley threw incompletions to Eldridge Massington and Paul Perkins. But on third down, he stuck in the pocket a third time just before taking a crushing hit, delivering a sharp pass to Devin Fuller inside the 10. The ball bounced off Fuller’s hands as he dove toward the sideline. It wouldn’t have been an easy catch, but it was one Fuller could have made. UCLA settled for a 42-yard field goal, one that moved Ka’imi Fairbairn to 10-of-21 from 40 yards or farther in his career.

Hundley didn’t throw for another first down until UCLA already trailed by 18 points.

The other was Hogan’s second touchdown pass, a 37-yarder to Devon Cajuste with 41 seconds left in the first half. After already giving up a first-down conversion on second-and-8 at midfield, the Bruins needed to at least hold Stanford to a field goal. Instead, both safety Tahaan Goodman and linebacker Myles Jack badly misplayed what should have been an interception or at least an easy pass breakup — something Jack readily admitted after the game.

UCLA still had a reasonable chance at a comeback until the Cardinal scored another touchdown on its first drive of the second half, but the game felt over after Cajuste’s catch.