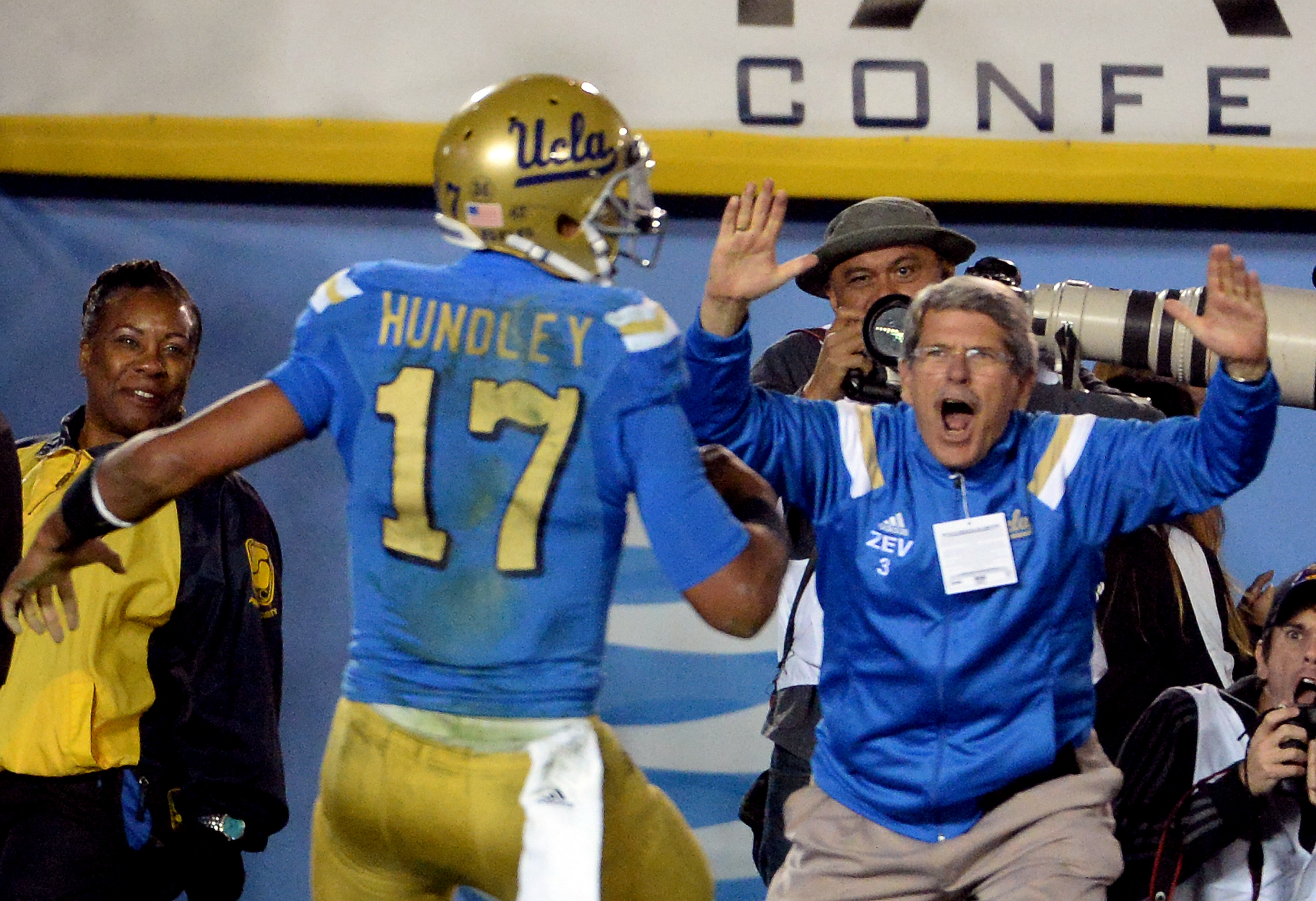 Brett Hundley (17) runs for a touchdown in a 38-20 win over USC, as former Los Angeles County Board of Supervisors Zev Yaroslavsky, right, celebrates at the Rose Bowl on Nov. 22, 2014. (Keith Birmingham/Staff)

One of the lows in recent UCLA football history was the 2012 NFL draft. That was the year that not a single Bruin was picked, becoming a sort of epilogue on the recently expired coaching tenure of Rick Neuheisel. The same drought occurred in the 2009 draft, which followed Neuheisel’s debut season, and in the 1997 draft. Otherwise, the program had produced at least one selection every single year since the draft contracted to seven rounds in 1994.

But in the last two years, UCLA broke out of that 2012 slump in a big way, producing four picks in 2013 and five in 2014. That included a pair of first-round picks in defensive end Datone Jones and linebacker Anthony Barr.

Those nine picks signaled the team’s highest two-year draft total ever in the seven-round era — giving head coach Jim Mora and his staff a nice selling point on the recruiting trail. No longer can the school be depicted as a place that failed to maximize its talent.

This time around, UCLA’s three best prospects are quarterback Brett Hundley, defensive end Owamagbe Odighizuwa, and linebacker Eric Kendricks. None of them are locks for the first round, but all three have at least a chance to be among the first 32 taken. If that happens, it will mark the first time UCLA has produced at least one first-rounder in three straight years since 1994-96 — when Jamir Miller, J.J. Stokes and Jonathan Ogden all became top-10 draft picks.

Unsurprisingly, Odighizuwa impressed everyone in Mobile, Ala., during the weigh-in — looking as shredded as usual at 266 pounds and half an inch over 6-foot-3. He also measured out with 11 1/8-inch hands, the largest of any defensive lineman at the Senior Bowl, and a wingspan of nearly 82 inches.

He didn’t disappoint once practices and started either, drawing attention for his first step and fluid hips. Three years ago, Jones was the UCLA defensive end who started generating momentum with a big Senior Bowl showing, eventually becoming the first Bruin selected in the first round since 2006. If Odighizuwa follows up with a strong NFL combine, he could echo that rise.

Short calendar to further prove where I stand in April. That's all I need. My mindset is fixed. Never satisfied. #Starving

One hurdle for him might be out of his control. This looks like a deep draft for edge pass rushers, and other prospects such as Utah’s Nate Orchard also performed well at the Senior Bowl. Teams could be willing to wait on the position in that late-first-to-second-round range.

Quarterback Brett Hundley (listed below) earned much of the attention for the Bruins’ win over Kansas State in the Alamo Bowl, but Odighizuwa also performed brilliantly, recording six tackles, two tackles for loss, a sack and two passes broken up. He followed that up with a strong performance during Senior Bowl week. Odighizuwa has an NFL-ready frame, a quick first step and good power. He’ll earn a first-round selection if doctors clear his surgically repaired hip, as issue that caused him to miss the entire 2013 season.

Hundley and Kendricks also made that list of top-50 potential draftees.

Senior Bowl executive director Phil Savage called out players who declined their invitations, and perhaps no one drew more attention for it than Hundley. ESPN, for one, called it a “missed opportunity,” comparing it to what befell A.J. McCarron last season. The Alabama quarterback didn’t play in the Senior Bowl, and was drafted in the fifth round; his replacement at the game, Jimmy Garoppolo, was drafted in the second.

This is not an entirely fair comparison for a couple of reasons. The first is that Hundley injured his hand in late November against Stanford, and still wasn’t 100 percent in the Alamo Bowl. Trying to gut it out could have turned the opportunity into a stock-sinking moment. (See: Teddy Bridgewater‘s Pro Day.)

The second is that Hundley is in a different situation than either McCarron or Garoppolo. The former had a lower ceiling, with draft hype that was buoyed as much by Alabama’s overall success as anything else. The latter spent his Eastern Illinois career in anonymity, playing in a home stadium that seats 10,000. Hundley is miles ahead of McCarron as a runner, and has already been on the cover of Sports Illustrated twice. With 40 games’ worth of film, he did not have as much to gain in the Senior Bowl.

sources say #Eagles have interest in Brett Hundley, but also tell me they'll "explore every option" to move up for Marcus Mariota #NFLDraft

The good news for Hundley is that no quarterbacks really stood out at the Senior Bowl. He still appears like the third-best candidate at his position behind Oregon’s Marcus Mariota and Florida State’s Jameis Winston.

The reigning Butkus Award winner really doesn’t have anywhere to go but up. The biggest knocks on Kendricks are his size and speed, but that’s already factored into his floor as a prospect. What’s in question is whether or not his instincts and game performance will make an NFL team overlook that. As scouts pore over game film over the next few months, that process is unlikely to hurt someone that became UCLA’s all-time leading tackler.

Kendricks — who missed the Senior Bowl with an injured hamstring — seems like a safe bet for a second-day selection, with some upside.

Eric Kendricks vs Virginia still gets me every time. I'll stand by my first-round evaluation with him. pic.twitter.com/PkMeIYDaLZ