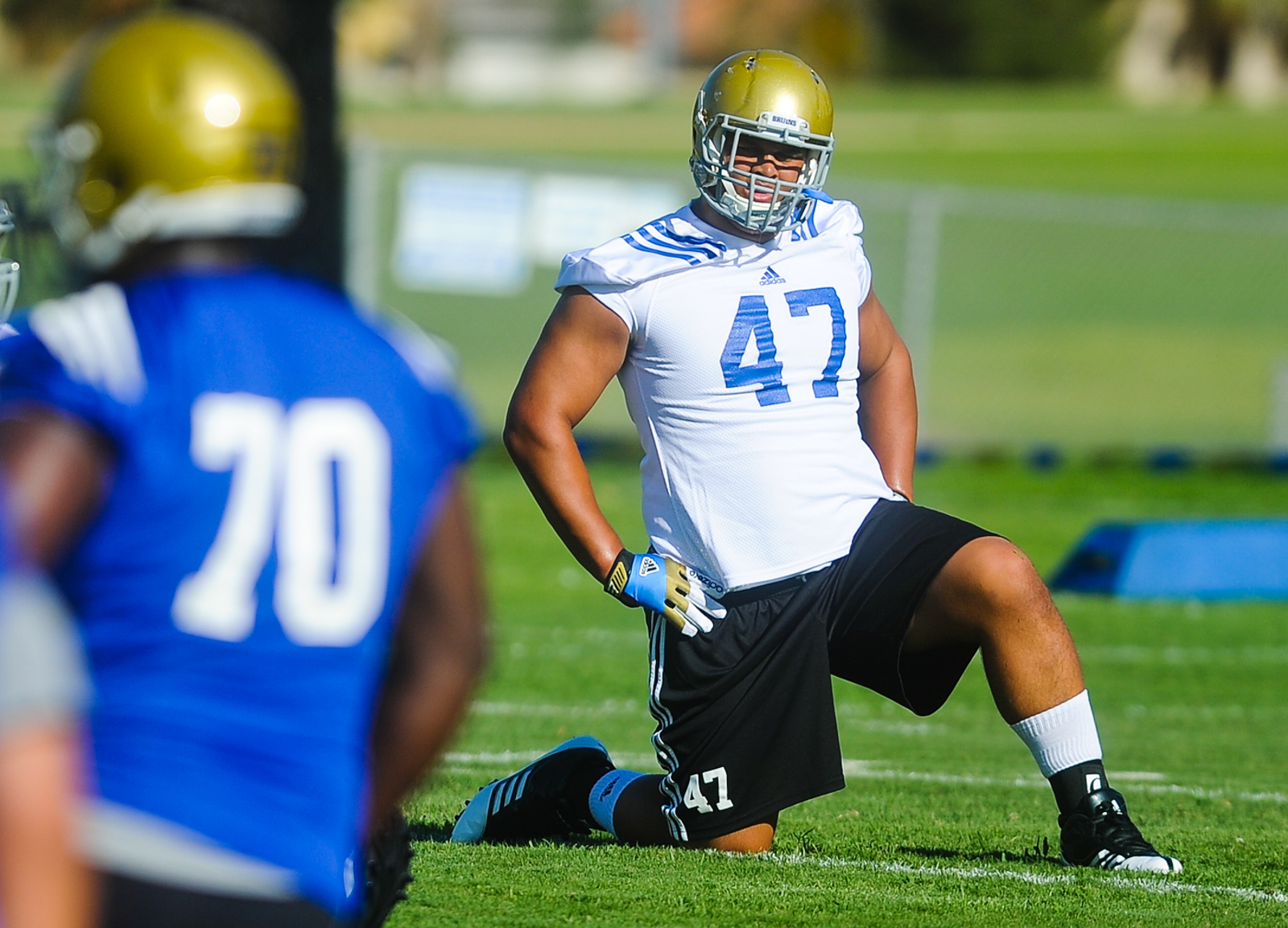 Defensive lineman Eddie Vanderdoes is out for the season after tearing his ACL in UCLA’s 2015 season opener vs. Virginia. (Rachel Luna/Staff)

UCLA rolled through its season opener at the Rose Bowl on Saturday with a 34-16 win over Virginia, but it took a gut punch a day later. An examination revealed that junior defensive lineman Eddie Vanderdoes had torn his ACL, sidelining the All-Pac-12 honorable mention for the rest of the season.

Here’s a look at what this means for the Bruins’ defense.

How significant is Vanderdoes’ absence?

It’s bad. Entering the season, UCLA’s most indispensable defensive players were linebacker Myles Jack, nose tackle Kenny Clark, and Vanderdoes. He and Clark made up the Bruins’ foundation on the front, which showed in their performance against Virginia. Vanderdoes led the team with eight total tackles and two for loss, while Kenny Clark was right behind him with seven tackles. Take out either of those players, and one of UVa’s first three field goals could have very well turned into touchdowns.

The injury is also a shame because Vanderdoes had just gotten through his first full offseason of football ever. Before this year, the junior had always been held out of year-round football by various injuries — or, when he was in high school, by the fact that he spent the spring playing baseball. Because of that, he was always stuck playing catch-up in terms of his conditioning early on. This year, he entered camp in top shape — only to see his season end less than a full game in.

Who’s going to replace him?

The defensive line depth was a concern for the Bruins this offseason, and although the development of some younger players assuaged that, none of the reserves are currently capable of playing at Vanderdoes’ level. So, all that “next man up” rhetoric regardless, expect a drop-off.

UCLA will use some combination of Eli Ankou, Matt Dickerson and Jacob Tuioti-Mariner to fill the gap. Ankou is a big, strong guy who can play the part physically at 6-foot-3, 305 pounds, but hasn’t ever played a big role for the team. As a redshirt sophomore in 2014, he made five tackles. Dickerson and Tuioti-Mariner were both four-star recruits who have shown promise

How does this affect the rest of the defense?

Heading into the season, UCLA’s biggest question mark was its quarterback. After Josh Rosen lit up UVa for 351 yards and three touchdowns, the bigger concern might be the Bruins’ defense.

On that side of the ball, UCLA looked good on Saturday — not great, not close to dominant. Besides Clark and Vanderdoes’ sterling showings, the unit arguably underperformed against preseason expectations. Yes, it was just one game, and defensive coordinator Tom Bradley said afterward that good football teams should improve the most through the first two weeks. Still, not having Vanderdoes will make that climb even harder. This is the time for Bradley to get creative and prove his reputation as one of the best coordinators in the country.

Clark could assume a bigger load up front, though it’s hard to imagine him handling too much more than he already did on Saturday. More of a playmaking emphasis might shift to the linebackers, who looked undisciplined enough that all four were subbed out on Virginia’s third drive of the game — a move Bradley said was planned in order to give younger players some reps. From starts like Myles Jack, Deon Hollins and Kenny Young to reserves like Jayon Brown and Kene Orjioke, there’s enough talent and depth to allow the team to experiment with different personnel groups.

Will Vanderdoes be as effective in the future?

It’s too early to say. Running backs Steve Manfro and linebacker Kene Orjioke both tore their ACL early last season, and both recovered quickly enough to suit up again this fall. (Manfro hasn’t seen the field yet, but he was available on Saturday in an emergency situation.) At 6-foot-3, 305 pounds, Vanderdoes may need a bit longer to get his knee back to 100 percent.

Vanderdoes had a chance to declare early for the NFL with a strong junior season. While he could have turned down the draft for another year in school regardless, his injury now essentially ensures his return. He should also be able to qualify for a hardship waiver, leaving him with two more seasons of eligibility.