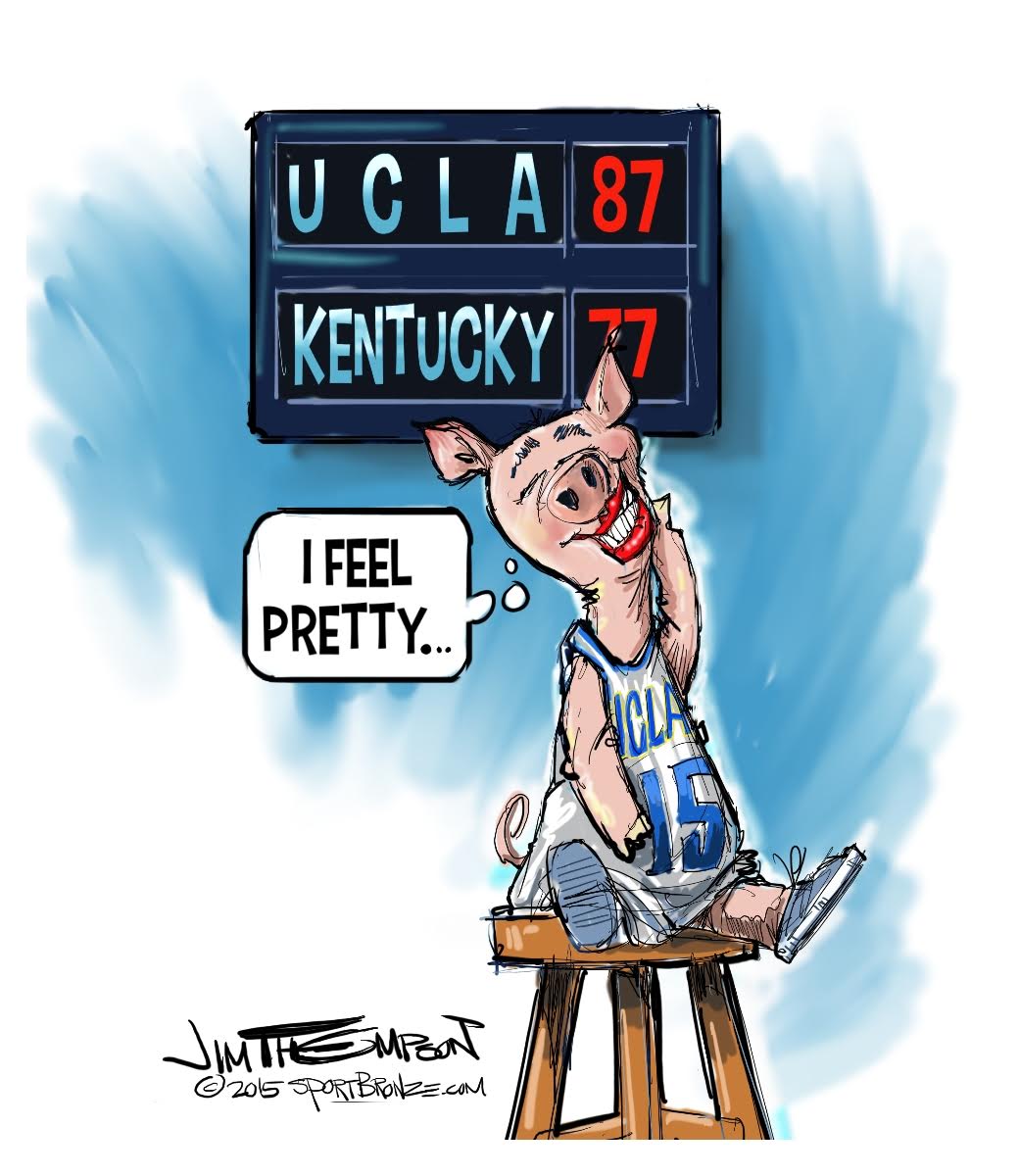 Yes, the above cartoon is pretty harsh. But is it wrong? After eight games, it’s only become more difficult to ascertain just where UCLA men’s basketball is headed this season. On one hand, the Bruins just knocked off No. 1 Kentucky, an 87-77 win that stands as the most impressive of Steve Alford’s short tenure. On the other, they’re only three weeks removed from a season-opening loss to Monmouth.

In case you missed it, here’s my story on the buzz last night at Pauley Pavilion, and Mark Whicker’s column on sophomore Thomas Welsh.

A few more thoughts on UCLA …

1. The Bruins are back on track to make the NCAA Tournament. Losing to Monmouth to open the season was the type of game that would have pushed a team to the wrong side of the bubble. Upsetting the top-ranked Wildcats on national TV undoes all of that damage. UCLA still needs to take care of business the rest of the way, of course: Beating every nonconference opponent left other than Gonzaga or North Carolina would help, as would matching last year’s 11-7 record in conference. There’s still a chance that beat Kentucky was an anomaly, but Thursday night showed that there’s plenty of talent to work with on this roster. Just as importantly, they’re no longer fighting an uphill battle in terms of national perception.

2. Steve Alford deserves credit for the game plan. Kentucky had looked as impressive as any team in college basketball, having gone 635 days since losing its last regular-season game. Strip away that context, though, and no one would have picked the Wildcats as the superior team at Pauley Pavilion. UCLA went to an effective man defense that kept UK out of the paint and forced them to settle their jump shots — the team’s most glaring weakness.

A view inside the locker room after #UCLA’s thrilling win. #GoBruins https://t.co/y4Q3yusPWd

“Their coach did a great job of preparing his team,” said Kentucky’s John Calipari. “I thought they were going to play zone and they never went to the zone. They didn’t have to.”

But can the Bruins sustain that type of stinginess through the rest of the season? Alford has long stated his willingness to allow his opponents to shoot 3-pointers, reasoning that such shots are more difficult to make. But against better shooting teams, that philosophy often digs UCLA into deep holes. The Wildcats average 28.5 percent from beyond the arc, which barely puts them in the top-300 nationally. Kansas, which obliterated the Bruins in Maui, is No. 11 in the country at 44 percent.

Most of UCLA’s remaining opponents aren’t in the Jayhawks’ stratosphere, but there are two to watch out for: Colorado (42.3 percent) and Oregon State (41.8).

3. Thomas Welsh is having a breakout year. That UCLA’s big-big lineup is even feasible is a credit to the 7-foot sophomore, whose collegiate development is starting to mirror his in high school from a virtual unknown to a McDonald’s All-American. At Pac-12 Media Day in October, Arizona coach Sean Miller — who worked with Welsh this summer on the USA Basketball U19 team — was especially effusive about the center’s jump shot from 15 to 17 feet out, adding that he sees NBA potential in the Redondo Beach native.

Last year, Welsh shot 39.7 percent on 2-point jumpers. This season, he’s up to 61.4 percent, leading the team with 44 attempts — more than halfway to his freshman total of 78.