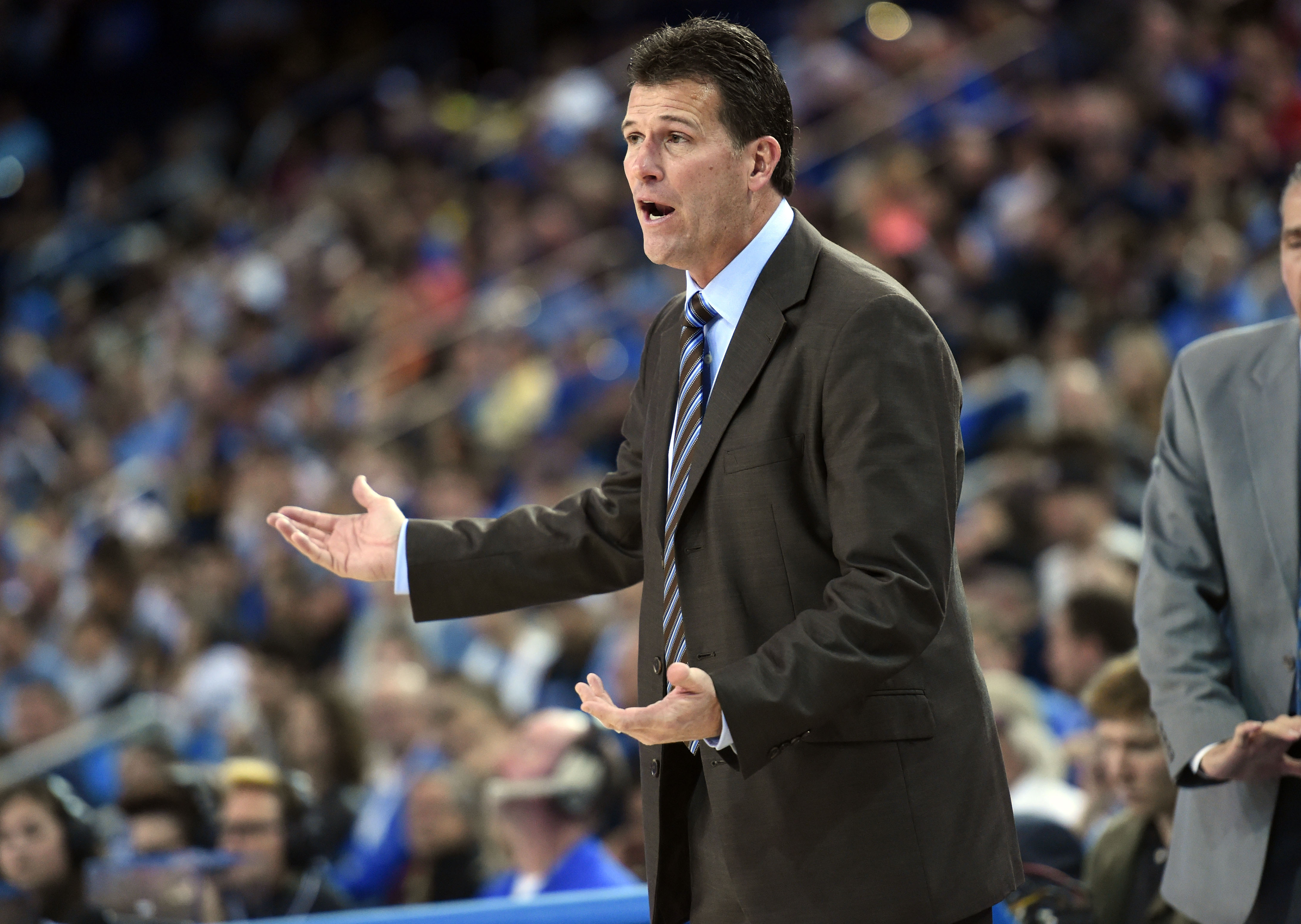 After guiding UCLA to one of its worst seasons in recent memory, what questions are facing Steve Alford and the Bruins? (Stephen Carr/Staff)

Was it a bad season? Yes. Absolutely, unequivocally, yes. Finishing with an overall record of 15-17 would qualify as bad for most major programs, let alone the one that holds more national titles than anyone else.

There shouldn’t be much dispute about this, but Steve Alford emphasized this week that the Bruins shouldn’t be dinged for a “bad season” — only for a bad two-and-a-half months. But given that the whole season only lasts about four months, this seems like a case of splitting hairs.

Most coaches should be granted leeway for the occasional bad season. It’s the timing of this season — as as well as the way it unfolded — that should cause concern about the viability of the Alford era. Yes, he reached the Sweet 16 twice, but had the benefit of inheriting a number of future NBA players. This season featured a roster almost entirely of his own design. Despite that, this team saved its worst basketball for last, losing its last five games by an average of nearly 12 points.

Can a top recruiting class turn things around? Perhaps. The nature of modern college basketball helps facilitate quick turnarounds, with one-and-done players making the type of impact that isn’t feasible in other sports. As the season spiraled down, Alford made increasingly frequent references to his top-five group of signees. He did so with good reason: Lonzo Ball is as well regarded as any point guard prospect in recent memory, and T.J. Leaf should make the frontcourt much more offensively skilled.

But Ben Howland also brought in a loaded recruiting class before his final season, landing Shabazz Muhammad, Kyle Anderson, Tony Parker and Jordan Adams in what was a No. 2-ranked haul. While that helped the Bruins go from 19-14 to a Pac-12 title, a 20-point loss to Minnesota in the first round of the NCAA Tournament still cost Howland his job. Perhaps they would have made a deeper run had Adams not broken his foot in the Pac-12 Tournament (or if Muhammad had been in better shape to start the season). Still, other cracks were showing: Josh Smith and Tyler Lamb both transferred out early in the season; Parker was unhappy about his playing time all year and publicly noncommittal about staying; Norman Powell said he would have left had Howland not been fired.

Will everyone be back? Parker is the only player who has exhausted his eligibility, which should give UCLA some veteran experience to balance its infusion of young talent. That is, of course, assuming that no current players look elsewhere.

With Ball coming in, there’s going to be a logjam in the backcourt. Ideally, Bryce Alford would cede a lot of ballhandling duties to the incoming freshman phenom, whose elite vision and playmaking ability will likely be the catalyst for UCLA’s offense. But that leaves freshman Aaron Holiday in an odd spot after starting all 32 games, and was often the team’s most dogged perimeter defender — a particularly valuable trait on a team that ranked No. 130 nationally in defensive efficiency. Might he be bound for a role off the bench as a sophomore?

In even worse position is Prince Ali, who played a grand total of 20 minutes through the last four games of the season. The Bronx native never looked comfortable after suffering a leg injury in early December, but it’s not clear how well he’d develop if he can’t carve out more playing time.

How hot is Steve Alford’s seat? It’s certainly not going to be comfortable. UCLA is missing out on March Madness during a year that the Pac-12 earned a record seven bids — including one for USC, which is appearing in an NCAA Tournament that doesn’t include the Bruins for the first time since 1985.

There’s no good way to spin that. If UCLA misses the field for a second straight year, Alford will certainly be gone. On the other hand, it’s difficult to see the Bruins dismissing him if he wins the conference and/or makes a Sweet 16 run.

Also worth noting: Alford’s buyout remains at $10.4 million until May 1, 2017, which means the financial burden of firing him next year is the same as it is right now. (Clarification: It would be paid in monthly installments until 2021, and be offset if Alford obtains another job. The two parties could also negotiate a lower lump sum payment.) Had UCLA not given him a one-year extension after his first season, his buyout would have dropped to $7.8 million on the same date this year, and to $5.2 million next year.