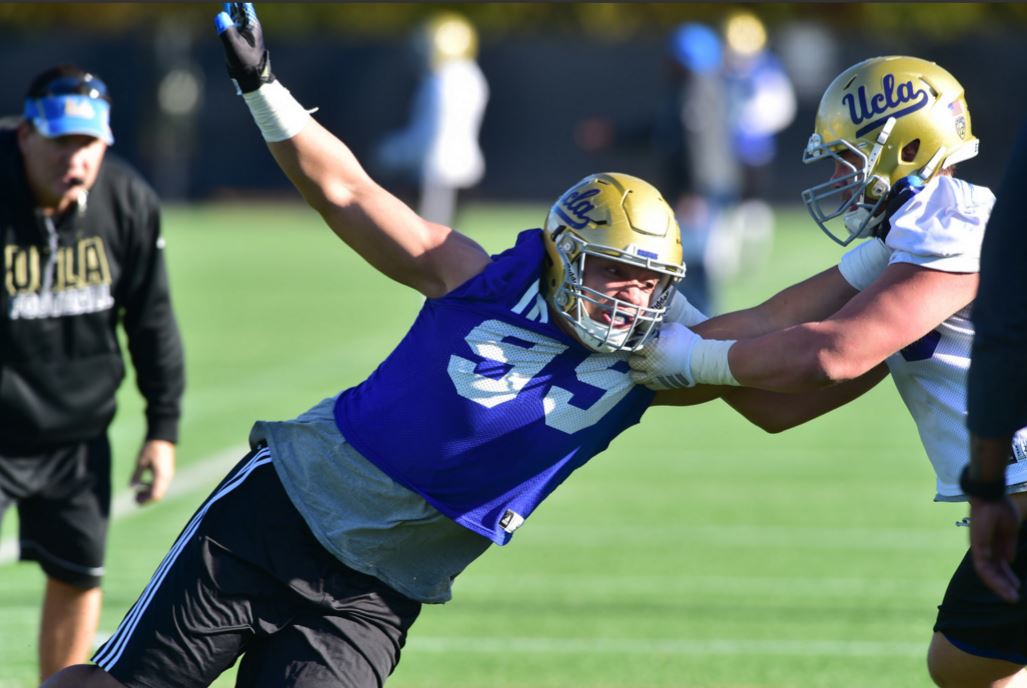 — Eldridge Massington caught a few good passes in the middle of the field. He said after practice that he and Rosen are developing a good relationship, and that he tells the quarterback to “throw me the dang ball.”

— Again the tight ends featured prominently in the offense. From what I saw, it was mostly one tight end sets with the tight ends mainly in a receiver role. Because the team didn’t have pads on, there weren’t a lot of running situations, so it’s difficult to judge what the full extent of the tight end situation will be in terms of blocking. If the team did show a two tight end set, then it was Nate Iese and Austin Roberts. Jake Jones also got into the mix a little bit too.

— We had a Matt Lynch sighting as the freshman quarterback took some 7-on-7 snaps. It’s still incredibly early in his UCLA career, but he made some accurate throws Thursday. Quarterbacks coach Marques Tuiasosopo was complimentary of the young quarterback, saying: “He’s got good size, he’s got some pop to his arm. He’s been good in the meeting rooms, so stay tuned for him. … He’s swimming a little bit, but I think the future will be bright for him.”

— Some of you asked about Deon Hollins. He was at practice on Thursday, but left early to go to class.

— Freshman kicker JJ Molson was a perfect 4-for-4 on his field goals again Thursday. Andrew Strauch was 3-for-5, as he got an extra one because his fourth one barely skipped over the bar. The angle was such that it was difficult to tell exactly the distance, but all the kicks were between 30 and 40 yards.

— Defensive lineman Nick Terry had a great showing during one-on-ones. He was quick off the line and very athletic when it came to getting around his man. One of his swim moves actually knocked his offensive lineman over and he went untouched into the back field.

— Eddie Vanderdoes continued to work out on the sideline as he comes back from knee surgery. Defensive coordinator Tom Bradley said he does not expect Vanderdoes to return for spring camp (“There’s no need. I think we’ll win the spring game”), but the coach hasn’t heard about any set-backs in his recovery. Bradley said Vanderdoes is becoming a champion on the stationary bike and the coach suggested that the 6-foot-3, 305-pound defensive lineman get ready for the Tour de France.

— The first-unit defensive line had Matt Dickerson and Takkarist McKinley at the ends and Jacob Tuioti-Mariner and Eli Ankou as the tackles. I saw mostly a 4-3 look, much less 3-4 than Tuesday. Wade Rick and Keisean Lucier-South were the second-unit defensive ends with Terry and Thomas Schwab playing inside.

— From what I could gather at corner, Marcus Rios and Denzel Fisher were the No. 1 guys and Nate Meadors and Randall Goforth were with the second unit. Fabian Moreau was on the sideline working back from injury.