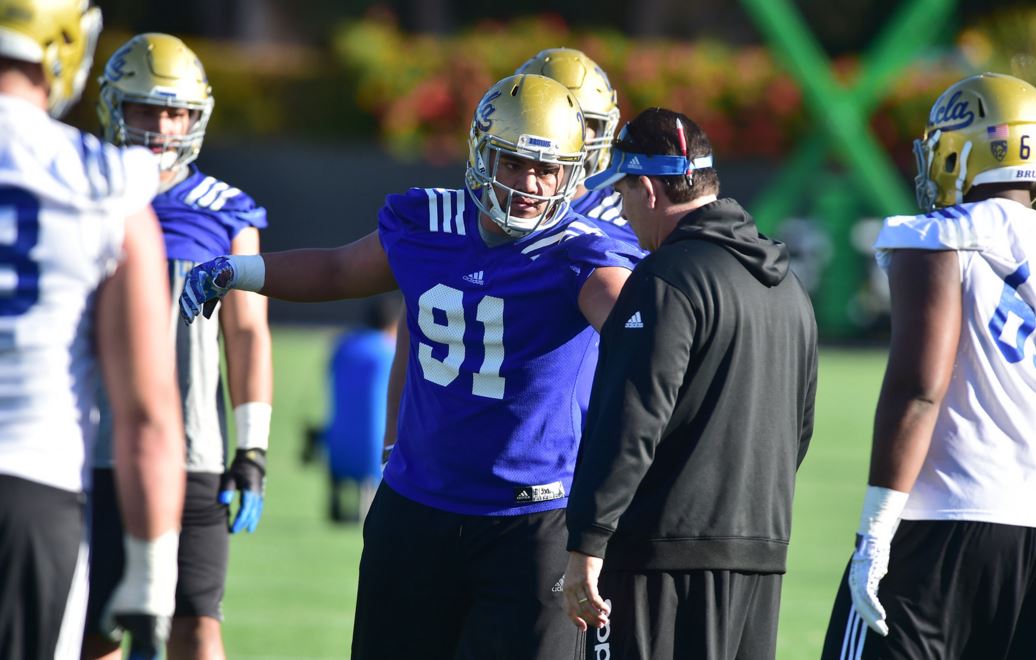 The offense showed some good improvement in the first day of the second week of spring practice, but for my own guess, it looked like the defense was the better unit on Monday. The Bruins dressed in full pads for day 4 of practice.

A notebook focused on Ishmael Adams‘ change to offense and Steven Manfro‘s potentially career-ending shoulder injury. The running back is getting his shoulder looked at Monday night at which point a decision will be made about his football future, Jim Mora said.

Here are notes/observations from practice:

— Mora was pleased to report that the offense only committed two false starts in 90 plays. It’s a great improvement from last week’s practices.

— The defense made some great plays during the scrimmage periods, getting interceptions on every quarterback. Josh Rosen threw a pick that was tipped and pulled down by defensive back Randall Goforth. Cornerback Denzel Fisher intercepted Mike Fafaul and could have easily gone for a pick-six. Linebacker Lokeni Toailoa got an interception off fellow freshman Matt Lynch.

— Goforth plugged in as a starting cornerback with Marcus Rios sitting out of practice. Rios strained his groin on Saturday. Mora doesn’t expect the injury to be serious. Goforth’s move to cornerback and DeChaun Holiday’s transition to safety are moves to develop depth and position flexibility, defensive backs coach Demetrice Martin said.

— Monday was the first day of nickel defense installation and Octavius Spencer went in as the first choice nickel back with Adams moving to receiver.

— In the second scrimmage period, the first team defense did a good job stopping the run. Defensive tackles Eli Ankou and Jacob Tuioti-Mariner did a good job at plugging up the middle against running backs Nate Starks and Bolu Olorunfunmi. On offense, Rosen converted a long pass to tight end Nate Iese on second-and-14 for a first-down conversion and capped the drive with a touchdown pass to Darren Andrews.

The second string defense did not do as good of a job against the run. When the units changed, the second string offense ran the ball three straight times down the middle for a first down.

— Defensive lineman Nick Terry again had a good day in one-on-ones at the expense of offensive lineman Kenny Lacy. Terry beat Lacy with a straight bull rush, then later got him with a slick swim move.

— Kicker JJ Molson went 3-for-4 on his field goals at the end of practice. Andrew Strauch went 4-for-4.

— Receiver Aaron Sharp had a class issue during Monday’s practice and was not present.

— Mora confirmed that linebacker Dwight Williams has left the program.