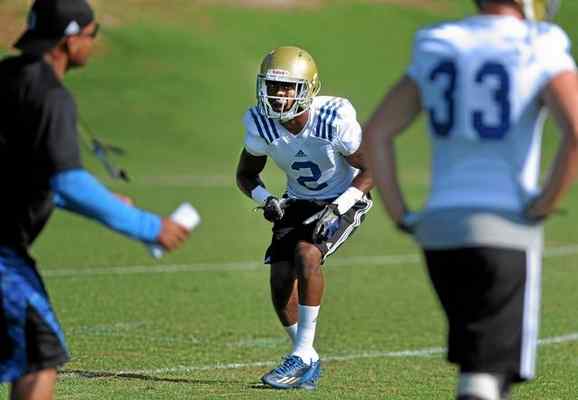 Safety Jaleel Wadood is part of UCLA’s deep secondary that was one of the best in the conference in 2015. (MICAH ESCAMILLA — STAFF PHOTOGRAPHER)

Despite losing cornerback Fabian Moreau early in the season due to a lisfranc injury, UCLA had one of the best pass defenses in the conference last year.

The Bruins led the conference in passing yards allowed per game (203.2) and held opposing quarterbacks to a 113.4 passer efficiency rating, which also was tops in the Pac-12. Here’s more on how UCLA stacked up against the other pass defenses in the Pac-12:

It could be much of the same good news for UCLA as every defensive back who started a game last season is returning. Moreau and John Johnson are both coming off injuries and are not expected to participate in any drills during spring practice. While the team waits for its “wounded warriors” to return, defensive backs coach Demetrice Martin said the focus will be on building depth and position flexibility during spring.

Adarius Pickett ran with the No. 1 defense on Monday at safety alongside Jaleel Wadood. Pickett did not start a single game last year and had 24 tackles in a reserve role, but has impressed the coaching staff with a high football IQ during spring.

“He has that kind of running back mentality, just taking it to people,” head coach Jim Mora said. “He has a knack for being around the ball. He’s starting to really get an understanding of how to play safety, where he’s supposed to fit in the run game, what his pass drops are. He’s playing with a high level of confidence.”

Pickett’s chance at safety comes as Randall Goforth, who started 10 games at safety, moves to corner, where he played during high school. Goforth started at corner opposite Nate Meadors during Monday’s practice as Marcus Rios was hampered by a groin strain.

Both Mora and Martin are excited about Tahaan Goodman at safety as Martin said the defensive back is “settled in” now. DeChone Holiday is also moving from cornerback to safety.

The depth in the defensive back field is strong enough that the coaching staff is confident in moving cornerback Ishmael Adams to wide receiver, where he is making a smooth transition. The door is still open for Adams to return to his nickelback position later, but for now, Octavius Spencer will get the nod during spring practice.