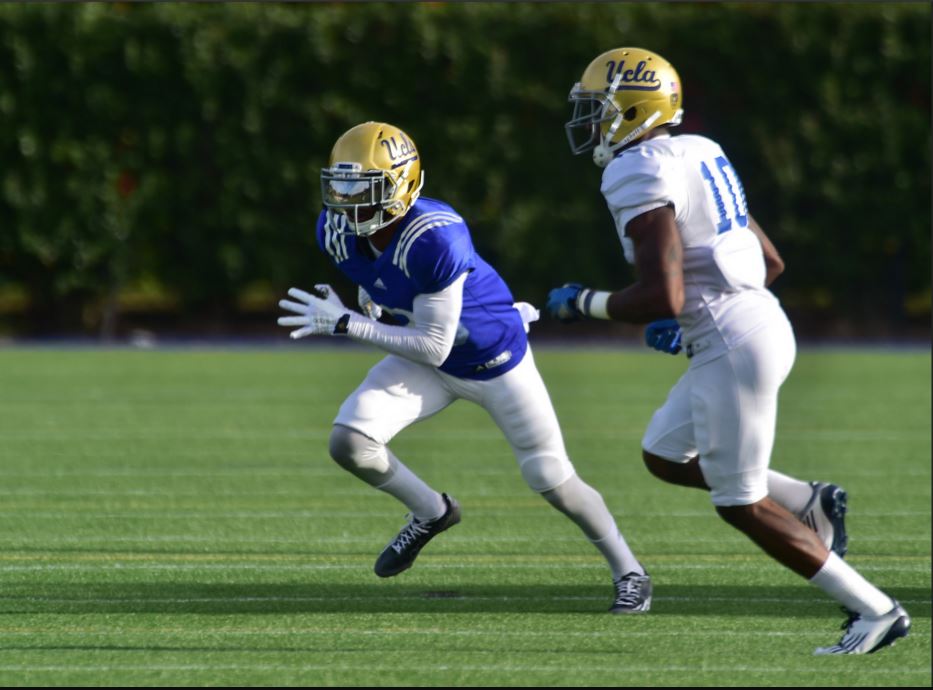 A notebook is here. It’s focused on Jim Mora’s unscripted approach to 11-on-11 periods and the offensive line’s ‘growing pains’ during spring.

Here’s video of Mora’s press conference today. He was the only one available for interviews.

Here are notes and observations for the day:

— Another day dominated by the defense. The offense was pretty lackluster, save for a few good catches from Theo Howard and Ishmael Adams. Quarterback Mike Fafaul was the beneficiary of Adams and Howard’s great speed and playmaking ability as both repeatedly juked and outran defenders.

— The offensive line was plagued by false starts again, specifically Kenny Lacy and Cristian Garcia, who were each tagged twice. Mora acknowledged the continued problem, saying that it’s a tired excuse at this point to blame it on the changed cadence. He said the issue comes down to focus and discipline, and promised it will get better.

— The defensive line had a great day getting to the quarterback. Pretty much every defensive lineman got a sack (or at least a share of a sack) Saturday. The offense gave up two sacks during the first 11-on-11 period and three each during the second and third periods.

— Josh Rosen had an efficient day Thursday, but Saturday was not his finest. He missed some throws during seven-on-sevens and one-on-ones. He looked pretty frustrated with his performance at times and after finding Adams for a touchdown during one-on-ones, he looked almost relieved that he finally hit one.

— It seems like almost every day a new defensive back is sitting out of practice. Today, it was Randall Goforth who was working out on the sideline. Denzel Fisher had a good day in his place, however, grabbing an impressive interception off Rosen. It looked like receiver Kenny Walker had Fisher beat on the route, but Fisher showed great closing speed and leaped for the interception.

— Defensive backs Dylan Luther and Charles Dawson each had a good pass breakup. Dawson’s prevented a touchdown pass to Lasley in the back corner of the end zone.

— Defensive back Tahaan Goodman picked off Fafaul on the final 11-on-11 play of practice. Fafaul overthrew his receiver in the middle of the field and it fell right into Goodman’s hands.

— Mora said linebacker Mique Juarez has been out of practice since Wednesday due to a hit to the head earlier in the week. He strained his neck and the coach asked him to rest at home for the past few days.

— Kicker JJ Molson hit all six of his field goals, while Andrew Strauch struggled, hitting only three of his seven chances.