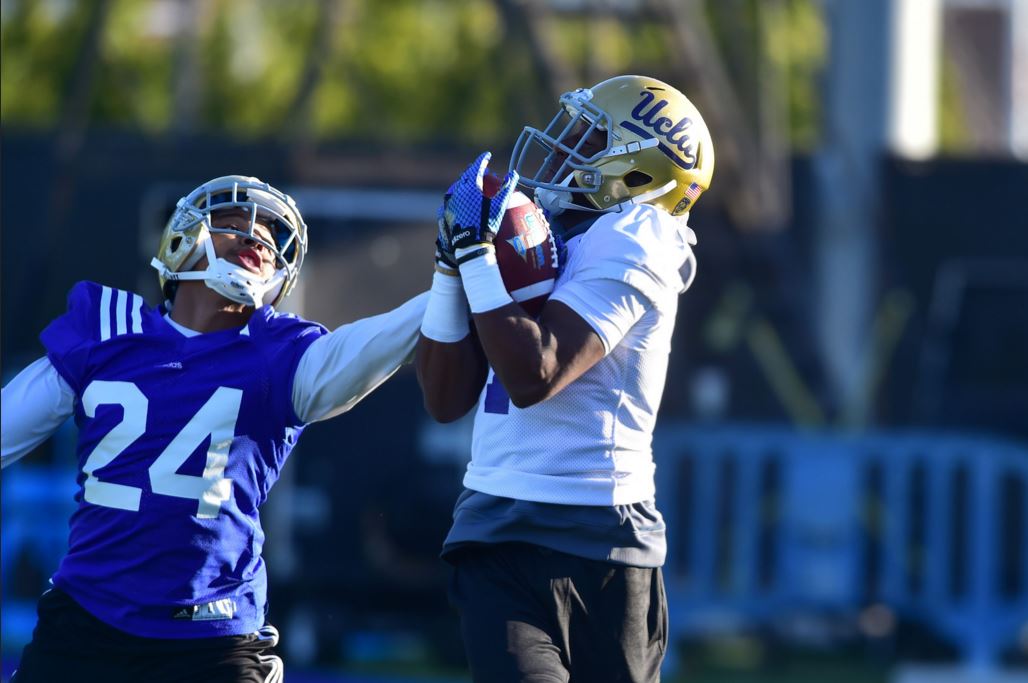 A notebook is here about the wide receivers and the group’s need for a leader to emerge.

Here are notes and observations from the eighth day of camp:

— The offense won the daily competition for the first time this spring. It was a third-down competition and the offense won 3-2, according to linebackers coach Scott White. Thus the defense and its assistant coaches were sentenced to running a lap.

— Theo Howard and Ishmael Adams continue to impress on offense. On Monday, they put on some of their finest moves to juke and outrun defenders. Howard especially had a good day in seven-on-seven competitions. Adams made a good one-armed catch with a defender hanging on him during the first 11-on-11 period from Matt Fafaul.

— Josh Rosen had a bit of an off day. In most other bad days of spring, it was that he had immense pressure in his face and was getting sacked all the time. On Monday, he just missed receivers or had miscommunications with them. He threw an interception to Will Lockett in seven-on-sevens and almost had another picked by Jaleel Wadood, who barely missed the catch as he was going to the ground.

— Stephen Johnson III is at the center of a coaching tug-of-war as the wide receiver is a target as a potential defensive back. Johnson took a rep at corner during one-on-ones against Alex Van Dyke at the urging of defensive backs coach Demetrice Martin. Johnson gave up the catch.

Martin said previously that he’s eyeing Johnson as a defensive back in return for his concession of Ishmael Adams. He gets in Johnson’s ear, encouraging him to just take a rep at corner to try it out and see how he likes it. Receivers coach Eric Yarber sees the “sneaky moves” but is prepared to fight to keep Johnson on his side of the ball.

“I don’t blame him because that’s a big time athlete,” Yarber said of Martin’s antics. “(Johnson) could be productive on both sides of the ball, but I’m going to do my darndest to keep him on the offensive side of the ball.”

— Defensive ends Deon Hollins and Keisean Lucier-South both had good showings in one-on-ones, breezing by offensive linemen with their speed rushes. The coaching staff still wants to work with the pair on inside moves, though.

— Jayon Brown is still everywhere on defense. The linebacker had back-to-back tackles for loss during the first team period, dropping running backs Soso Jamabo and Nate Starks in consecutive plays. He’s stepped up as a leader, White said, while teaching the younger linebackers. He’s been getting a lot of reps lately. I feel like he barely left the field during the team periods.

— Fullback Ainuu Taua made an impressive catch during one-on-ones, locating the ball over his shoulder near the sideline. He later prompted a little bit of a scuffle after he threw a linebacker down to the ground. There was pushing and shoving, but it dispersed pretty quickly.

— Although it came after Rosen was sacked, Darren Andrews made a good, leaping catch in the end zone over his defender.

— Both JJ Molson and Andrew Strauch went 2-for-2 on field goals.