The notebook from Monday’s practice was focused on the receiving group and the unit’s search for a leader. The Bruins need to fill a very large void left by Jordan Payton and Thomas Duarte, who were the team’s top two receivers last year.

Below are two charts of how some of the receiving numbers broke down last year. The left pie is a representation of the total receiving yards or catches by UCLA receivers last year. The yellow slices represent players who are not with the team anymore, while the big blue slice on the left represents the production of the receivers who are returning for 2016, and that total is further broken down in the right pie. Neither chart includes totals from running backs. 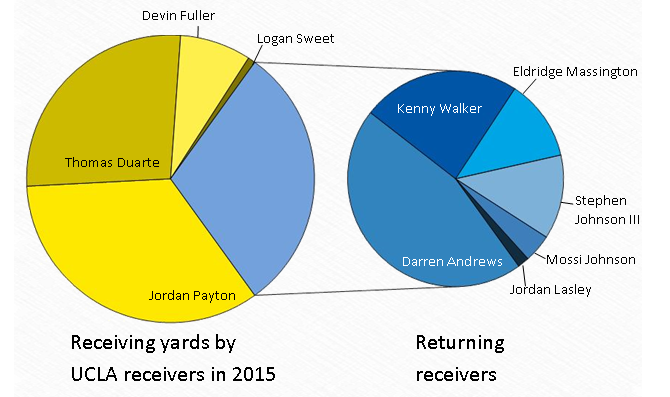 The Bruins lost 69.9 percent of their receiving yards gained by receivers. Payton’s yardage alone (1,105) surpassed the entire total of all the returning receivers (974).

Darren Andrews is the most productive returner, as he had 443 yards, which is 45.5 percent of the returners’ total.

In terms of catches, UCLA is losing 65.8 percent of last year’s total. Andrews had 52.4 percent of the returners’ catches. 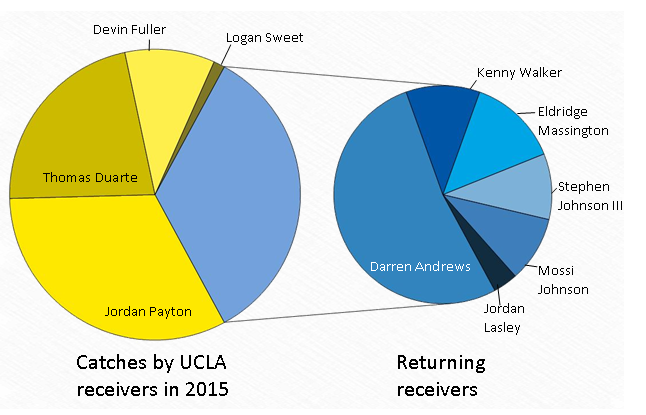