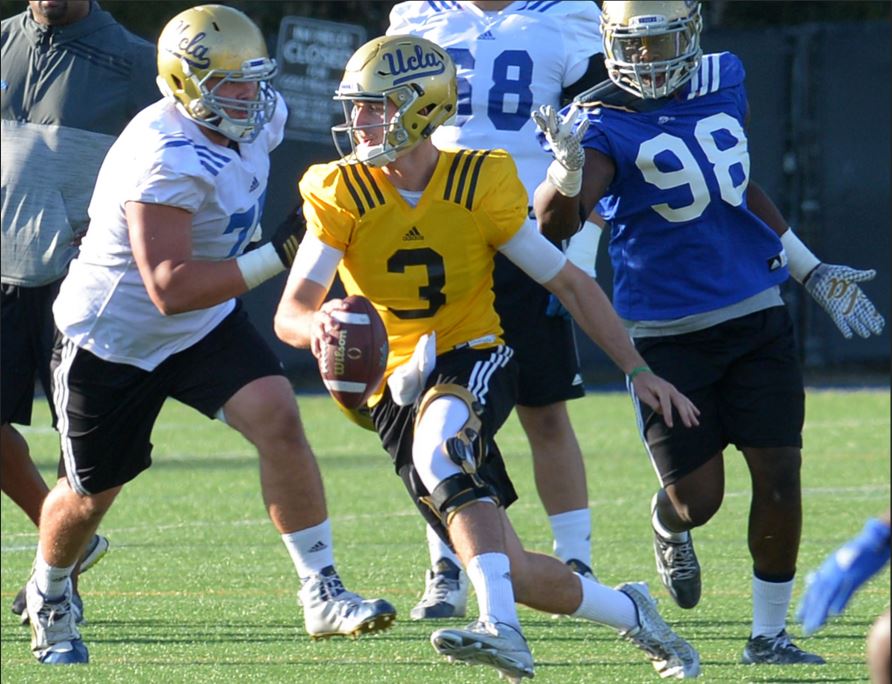 There is a notebook HERE focused on Cordell Broadus’ return to the team and Jim Mora’s support of Dan Guerrero in the satellite camp controversy.

Here is a photo gallery from the day with shots from our photographer Thomas R. Cordova.

Here are notes and observations from the day:

— It was a pretty even practice between offense and defense. Both sides made some good plays. Unlike Monday’s no-pad practice, Thursday’s had some good energy and competition. It was the last practice before Saturday’s Spring Showcase.

— Eldridge Massington built off of a good practice on Wednesday and added some great catches Thursday. He made a diving catch on third down, a leaping catch also on third down, and a one-handed snag for a long touchdown.

— Nate Iese was another favorite target Thursday. He caught a long pass from Josh Rosen, then two plays later caught another pass off play-action, and capped off that drive with a touchdown catch on third-and-goal. It was a sensationally placed pass from Rosen on the touchdown as the quarterback floated the ball to the exact right spot and Iese went up to snatch it out of the air.

— Soso Jamabo had several good runs up the middle during a long Mike Fafaul-led drive in the first 11-on-11 period. The drive was extended (for practice purposes, I assume) despite some third-down stops from the defense, and ended with a pretty sensational one-handed touchdown catch from Ishmael Adams.

— Randall Goforth got an easy pick-six off Rosen in the first 11-on-11 period, reading the route and running untouched up the sideline as Rosen was under heavy pressure.

— McKinley led a strong pass rush. He got at least three virtual sacks. Keisean Lucier-South and Jacob Tuioti-Mariner also created some havoc in the backfield.

— Ainuu Taua and Jaleel Wadood got into a scuffle during nine-on-seven. There was pushing and shoving after Wadood stopped Taua, who was running the ball on the play, and Taua eventually threw the ball at Wadood, who then picked it up and threw it back at Taua.

— Conor McDermott sat out of both the team periods and one-on-ones, but did some individual drills. In his place at left tackle, Andre James worked with the first string.

— JJ Molson’s one kick of the day, done in a simulated game fashion, was good.

— In a tribute to Prince, the team played exclusively Prince songs for the first 30 minutes of practice. Shout out to the camp DJ for that.

“Be as violent as possible.” #UCLA pic.twitter.com/Vy528uRY5I