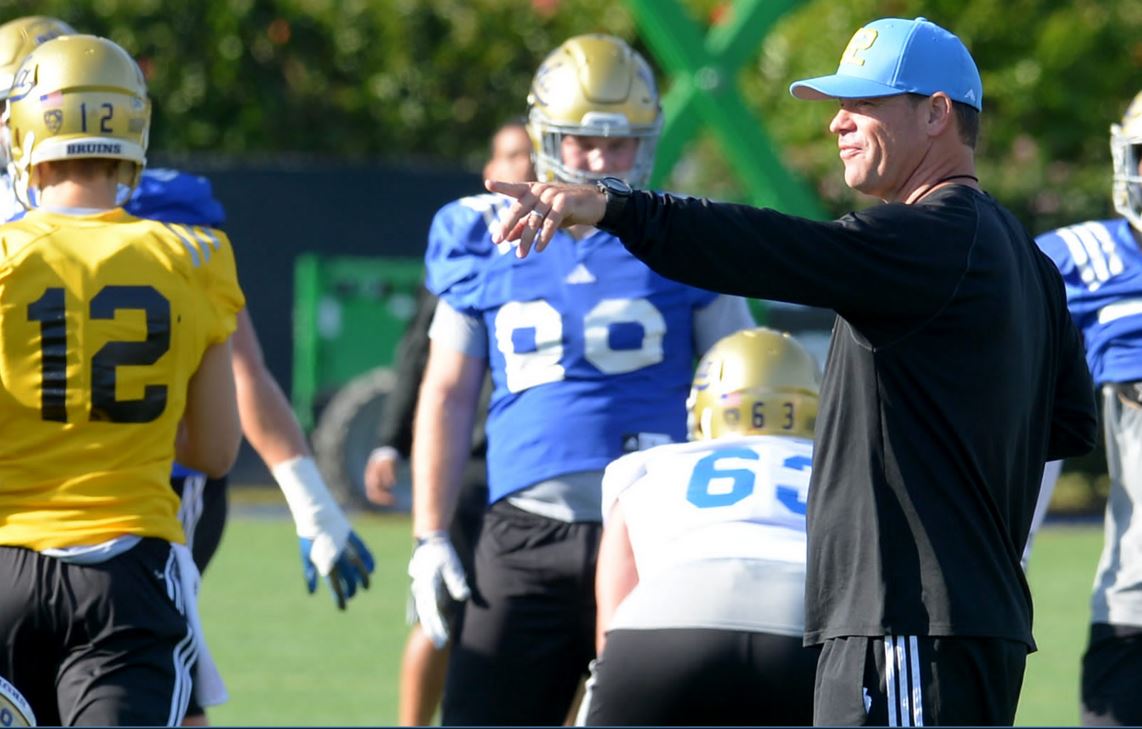 There is a notebook HERE focused on Josh Rosen and Takkarist McKinley. McKinley was named the MVP of spring camp by Jim Mora (you know, if there was such an award).

— We finally got to be a good enough position to see one-on-ones today and it seemed like there was a case of the drops going around early on. Austin Roberts, who was one of Mora’s standouts of spring camp, had an early drop, as did Alex Rossool.

— Kenny Walker, a receiver who has historically struggled with drops, showed strong hands and good concentration as he made a number of good catches. Walker caught a highlight reel pass from Rosen on the first play of seven-on-sevens, making a great adjustment to the ball, and catching it near the sideline. It helps that it was a sensationally thrown ball. During the team periods, Rosen threw another great ball to Walker after the quarterback rolled to his right, threw it back across his body to Walker, who ran a great comeback route for the ball.

— Rosen threw three interceptions, two to Charles Dawson and one to Mique Juarez. Two came during the team periods and one was during seven-on-sevens. After Dawson picked him off during seven-on-seven, Rosen stood in the middle of the field and raised two fingers to the side of his helmet like a gun and mimed pulling the trigger a few times as Dawson ran back the pick.

— Mike Fafaul threw a dime to Brad Sochowski during seven-on-sevens that went for about 40 yards. Octavius Spencer was on the coverage.

— Denzel Fisher had a great day on defense, breaking up passes left and right. He owned Jordan Lasley during one-on-ones, breaking up three straight passes to Lasley.

— Eldridge Massington, who beat Fisher twice on one-on-ones, called Fisher his main competition during spring and said he’s improved his footwork tremendously, which has helped him get much better this spring. Massington was close to another great catch against Fisher during the team period, but was ruled out of bounds. Massington elevated over Fisher to grab the ball and the two players wrestled for it, but Massington held on. While the ref called it out, Jordan Payton, who was one of the many former players on the sideline for the practice, pointed to the divot on the field, which was inbounds, trying to sway the refs in favor of the offense. It didn’t work.

— Nate Iese had a great catch during the first team period, almost snagging a ball with one hand, but then volleyballing it to himself and completing the catch.

— McKinley, Jacob Tuioti-Mariner and Matt Dickerson kept consistent pressure on Rosen again. Deon Hollins also had two sacks on Fafaul during practice. McKinley said he thinks he and Hollins can be the top two sack artists in the conference this year. McKinley is gunning for the top spot, but wouldn’t mind settling for second place if it’s Hollins who gets the top spot, he said.

— While Bolu Olorunfunmi was the biggest star of the running back group during the spring, Soso Jamabo got some good work Saturday. He seemed to be the top option during goal line situations and he broke off a huge 50-yard touchdown run during the team period in which he just dusted the entire defense.

— JJ Molson continued his perfect streak during the final week of spring practice, hitting all three of his field goals. Andrew Strauch was 2-for-3.

— It looks like Ishmael Adams pulled his hamstring during the first team period. He came off the field limping at one point, came over to the training staff to get stretched out and came back, but did not last until the end of practice as he took his pads off during the second team period.

In the coming days, we’ll have some things to wrap up spring practice, so keep an eye out!