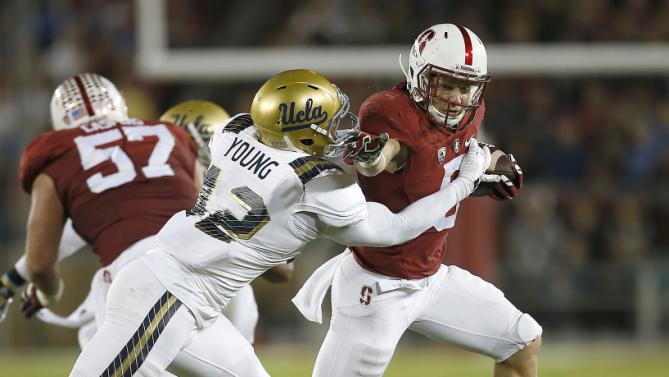 Scouting report: Stanford is still Stanford, the bully on the Pac-12 block. The Cardinal are coming off a methodical dismantling of USC in which Christian McCaffrey had 165 rushing yards, 73 receiving yards and two touchdowns (one receiving, one rushing). The running back leads the conference in rushing (149 yards per game) and all-purpose yards (235.0 yards per game). Stanford has wins over Kansas State and USC this season. Through two games, the Cardinal have been penalized only seven times for 61 yards. They are the least penalized team in the conference in yards per game. The Bruins rank fifth in the Pac-12 with 46.7 penalty yards per game.

Series history: The Bruins haven’t beaten Stanford since 2008. UCLA head coach Jim Mora is 0-5 against Stanford. The eight-game losing streak is the longest losing streak UCLA has ever had against any one conference opponent and the Bruins have six of those games by double digits. The closest loss was the 27-24 Stanford victory in the 2012 Pac-12 championship game. Stanford ran all over UCLA last year in a 56-35 victory with McCaffrey leading the way with 243 yards on the ground.

— A leader for this year’s Heisman Trophy, McCaffrey hasn’t been slowed by many defenses in his college career. UCLA’s defense hopes it can be one of the few to contain him.

— The outside linebacker leads the team in sacks and is only one tackle behind team leader Zach Hoffpauir.

— Thomas will be a load for the UCLA offense line that struggled to protect quarterback Josh Rosen against Texas A&M and failed to establish the run against BYU.