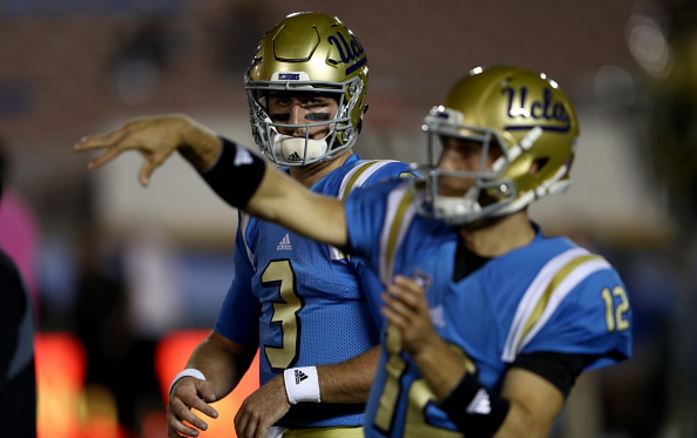 Josh Rosen (behind) and Mike Fafaul warm up before a game against Arizona on Oct. 1. Fafaul has now taken over the starting quarterback position since Rosen’s season-ending shoulder surgery.
Sean M. Haffey/Getty Images

Receivers coach Eric Yarber calls the connection between a receiver and his quarterback the “you-to-me factor.” The “you” of that equation used to be Josh Rosen. Now it’s Mike Fafaul.

The change at quarterback is far from the reason why UCLA went on its four-game losing streak, but it had coincided with a change in how receivers are being used in the offense.

Below is a breakdown of the number of catches by receivers/tight ends from passes thrown by either Rosen or Fafaul this season. It does not include receptions from running backs and it does not include the one pass Fafaul threw toward the end of the UNLV game (which was complete to walk-on receiver Brad Sochowski).

Since midway through the Arizona State game, when Fafaul took the first meaningful snaps of his career, Darren Andrews and Jordan Lasley have taken much larger roles in the passing game. Together, they’ve caught 45 of Fafaul’s 91 completions to receivers.

Lasley has been the big winner in the quarterback change. He had 14 receptions from Rosen (12.1 percent of Rosen’s 116 completions) and has 20 receptions from Fafaul (22.0 percent). The two were scout team buddies two years ago when Lasley was redshirting and Fafaul was still a walk-on, which could explain how they’ve so easily transferred their “you-to-me factor” to the field this year.

Eldridge Massington and Kenneth Walker III have taken the largest steps backwards under Fafaul. Walker was also slowed by a concussion that he suffered against Utah.

Seven receivers had double-digit receptions from Rosen as the sophomore was good at spreading the ball. Although Fafaul has clearly found his favorite targets, the way he’s distributed the ball could possibly be a byproduct of a coaching decision to shorten the receiver rotation. Only four receivers caught passes against Colorado and only five caught passes against Oregon State.