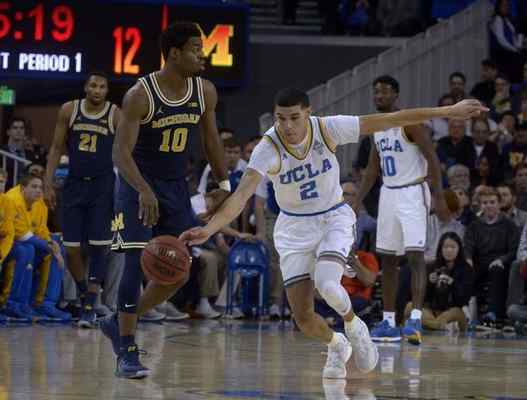 UCLA held steady at No. 2 in the AP poll, but earned one most first-place vote

Beating Michigan by 18 points on Saturday ranks second on UCLA’s list of quality wins only to last week’s victory at then-No. 1 Kentucky. The Bruins (10-0) only continue to build a foundation that could eventually make them the No. 1 team in the country – and they did earn one more first-place vote than last week, bringing their total to three.

But, nobody ahead of UCLA slipped last week. In fact, none of the top 11 teams in the country lost last week. No. 1 Villanova only added to its resume with a win over Notre Dame and my No. 2, Baylor, didn’t play.

How I voted in the Week 6 AP poll:
1. Villanova
2. Baylor
3. UCLA
The Bruins impressively withstood what can only be called Michigan’s best shot, which included 65 percent shooting and 12 of 16 successful 3-pointers in the first half. UCLA didn’t flinch, rather, raised its game to erase a deficit and win, 102-84. Baylor is finished with the difficult portion of its non-conference schedule, but Villanova is not, meaning UCLA could have a No. 1 next to its name if it remains undefeated.
4. Kansas
5. Duke
6. Gonzaga
7. Kentucky
8. North Carolina
9. Virginia
10. Indiana
11. Louisville
12. Creighton
UCLA and Creighton now have a common opponent in Nebraska. Creighton beat the Huskers by 14 in Lincoln, Neb., on Wednesday while UCLA’s win was only by 11 on a neutral court. In the process, Creighton point guard Maurice Watson Jr. surpassed Lonzo Ball as the nation’s assist leader.
13. Purdue
14. Wisconsin
15. St. Mary’s
I didn’t penalize St. Mary’s as badly for this week’s loss as most AP voters, mostly because I think UT-Arlington is a team you might see in the NCAA tournament down the road. It was St. Mary’s first loss of the season and the Gaels have a couple of quality wins over Dayton and Stanford.
16. West Virginia
17. South Carolina
18. Arizona
19. Xavier
20. USC
This is my first time ranking USC this season because the Trojans’ non-conference slate doesn’t exactly strike fear into anybody, but they’ve steadily built a good resume while others have faltered and it looks like they’ll enter Pac-12 play undefeated.
21. Notre Dame
22. Florida State
23. Butler
24. Michigan State
25. Wichita State