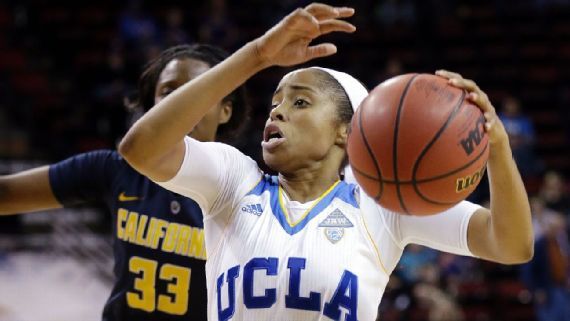 UCLA’s Jordin Canada will lead the Bruins into the NCAA Tournament as they host the first two rounds at Pauley Pavilion. (Photo by Elaine Thompson/Associated Press)

With a 27-game home winning streak, the UCLA women’s basketball team seems to have a favorable road to the Sweet 16 in the NCAA Tournament. But if the Bruins get there, they’ll face the biggest road block in the bracket.

By earning the No. 4 seed in the Bridgeport Region in the NCAA Tournament, the Bruins (23-8) have the right to host the first and second rounds, which start Saturday. With two wins, they’ll also have a date with undefeated powerhouse UConn, which owns the No. 1 overall seed in the bracket, announced Monday.

UCLA hosts 13th-seeded Boise State on Saturday in the first round at 3:30 p.m. PT. If they advance, they’ll face the winner between No. 5 seed Texas A&M and No. 12 seed Pennsylvania in the second round on Monday.

Boise State (25-7) punched its ticket to the NCAA Tournament by winning the Mountain West Conference tournament, bringing a 10-game winning streak into Westwood.