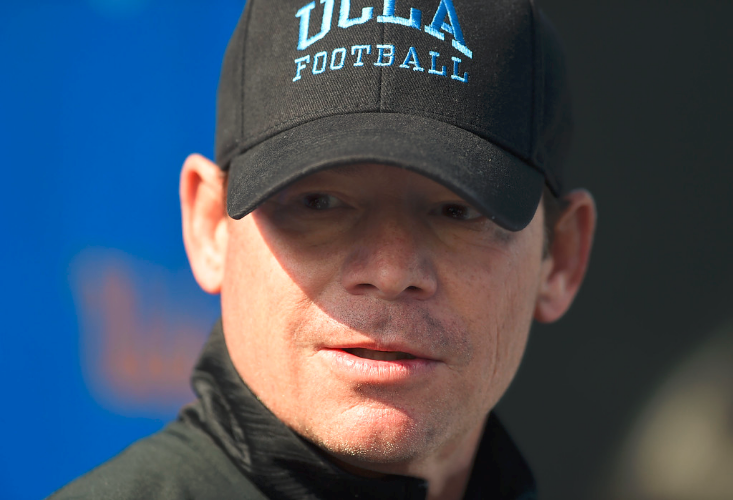 Head coach Jim Mora is planning to have an official spring scrimmage for the team’s spring showcase. (Photo by Brittany Murray/SCNG)

There’s no telling how UCLA’s next four practices will go, but if they go according to plan, the team’s final spring practice will be its first official spring game in three years.

Head coach Jim Mora said he plans on having a scrimmage between blue and white teams on April 29 at Drake Stadium during the Spring Showcase, barring significant injuries.

Mora opted to skip the scrimmage format for the spring showcase during the past two years due to injury concerns, but is encouraged by UCLA’s current health status as DeChaun Holiday (shoulder) suffered the only significant injury of spring practice so far.

— The offense won the goal-line team period, scoring touchdowns on all three of its drives. Josh Rosen found Darren Andrews for a touchdown for the No. 1 unit. Jimmy Jaggers made a strong catch with a defender draped all over him to reel in a touchdown from Devon Modster. Jalen Starks did the heavy lifting for the No. 3 offense, getting back-to-back runs and scoring the touchdown.

— Every day is a reminder of Jalen Starks’ talent, whether he’s running the ball, catching it or blocking. Since he was freed from his protective club, he’ll often go out in the flat and catch passes. He put a nice move on Lokeni Toailoa in one-on-ones between the running backs and linebackers to free himself for a short pass. The Crespi grad also scored a touchdown on the first drive of the first team period from the fullback position, diving up the middle for a score.

— Rosen made a number of nice throws on the day. In the second team period, he found Andrews for a touchdown as the wide receiver beat Nate Meadors on the coverage and came up with a nice fingertip catch. He later found Jordan Lasley on a play-action pass for another touchdown as Lasley caught the ball between Jaleel Wadood and Denzel Fisher.

— Adarius Pickett was the thorn in Rosen’s side (again) as the redshirt junior safety had two interceptions Thursday. After a pass from Rosen went off Caleb Wilson‘s fingertips, Pickett dove to scoop the ball up right before it brushed the turf. He picked Rosen off again on the final play of practice after jumping a short pass and sealed the overall practice victory for the defense. Although he wasn’t a full-time starter last year, Pickett is a star for the secondary. Get used to him picking off passes and making plays.

— Matt Lynch had a 25-yard scramble in the second team period.

— Nate Starks made some good plays during the team periods, finding space on the edge and using his speed. The senior used one hand to reel in a lateral from Modster then put a shifty move on the linebacker to wiggle free for a few more yards in the red zone team period. Nate Starks, who is sometimes hampered by knee tendinitis, doesn’t get the number of carries you might expect of a senior, but he makes them count when he gets on the field.

— Rick Wade continues to dominate the defensive line/offensive line one-on-one drill. With the tight ends working through the drill for the first time this spring (that I’ve watched), Wade got convincing wins over Jaggers and Devin Asiasi. He also regularly collects wins against right tackle Kenny Lacy.

— Osa Odighizuwa also had an impressive day in the pass rush. He beat Andre James, then swam around Michael Alves so fast that the offensive lineman barely got a hand on the redshirt freshman defensive lineman. Odighizuwa also feasted on Jaggers in one rep, freezing the freshman at the line of the scrimmage while Odighizuwa rushed the quarterback.

— Caleb Wilson proved that he’s not only a threat catching the ball, but is worth a look as a blocker. He locked up Keisean Lucier-South a few times. Wilson had the best performance among the tight ends in the one-on-one drill.

— Kolton Miller and Najee Toran held it down for the offensive line. Miller handled Marcus Moore and also got a win against Jacob Tuioti-Mariner. Toran, who sometimes does not take one-on-one reps so he can practice snapping the ball during 7-on-7s, had a good win against Chigozie Nnoruka.

— J.J. Molson was 1-of-2 kicking. Both attempts were fairly short kicks and Molson buried the first one and barely pushed the second one wide. It looked like it may have gone in, but Mora waved it off. Andrew Strauch was good on his one attempt of the day from about 25 yards.

— Austin Roberts returned to the field after he spent the majority of last week on the sideline. Boss Tagaloa looked limited, walking gingerly around the field with the defensive line group with a brace on his right leg, but is not suffering from anything significant, Mora said. DeChaun Holiday has ditched his shoulder sling, but remained on the sideline. Poasi Moala‘s status after hip surgery is unchanged.