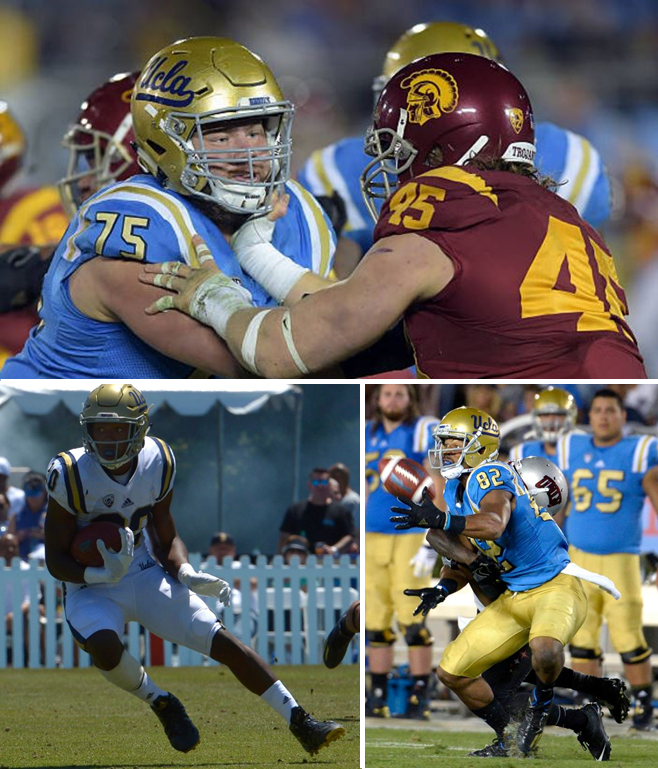 UCLA finished another phase of its offseason last Saturday. Players now hit the weights while coaches hit the recruiting trail. The Bruins will reconvene in late July for training camp, but let’s break down some of what happened during April.

Here are three of my standouts on the offensive side of the ball. (Three defensive players coming tomorrow.) 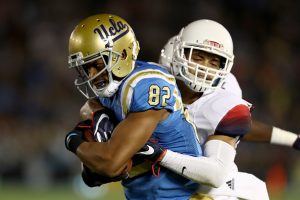 Eldridge Massington #82 of the UCLA Bruins catches a pass as Jace Whittaker #17 of the Arizona Wildcats defends during the first half of a game at the Rose Bowl on October 1, 2016 in Pasadena, California. (Photo by Sean M. Haffey/Getty Images)

If you can, forgive Massington for his drop on the first play of the spring game because he had an impressive spring overall. With the help of new wide receivers coach Jimmie Dougherty, Massington has embraced his 6-foot-2, 212-pound frame and the physical advantage it gives him against defenders. He uses his body to gain separation and it showed during spring practices. After he admitted that the fundamentals “got away from (him)” last year, he has a renewed focused on details. It applies to everything he does during practice and after.

Instead of getting treatment, the former sprinter used to hit the track for post-practice and off-day runs. That was his way of getting better, but it backfired. The extra strain wore out his body, making for sore knees on the football field, Mora said. This year, the coaches and Massington agreed that the redshirt senior would ease up on the track and make more time to recover and get treatment. Mora said he’s seen a jump in Massington’s confidence as well as Josh Rosen’s confidence in his receiver.

Massington said he still sneaks in a run or two when no one’s looking, though. 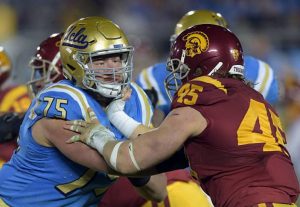 Led by James and center Scott Quessenberry, head coach Jim Mora was encouraged by the offensive line during spring.

“I thought they made progress,” Mora said. “It was nice to really be able to keep five consistent guys in there with the first unit. … I think they’re moving in the right direction.”

The main concern for the offensive line is still depth. The first group seems set. From left to right, it’s Kolton Miller, James, Quessenberry, Najee Toran and Kenny Lacy. After that, it’s unsettled. Redshirt freshmen Paco Perez and Michael Alves didn’t make too much of an impact with the second unit. Redshirt sophomore Josh Wariboko-Alali hasn’t shown much progression at all. 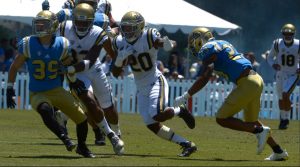 Fellow sophomore running back Jalen Starks certainly had an impressive spring as well, but Stephens proved to be perhaps a little more well-rounded as a back this spring. While Starks was used mostly in short-yardage situations (very effectively), Stephens got carries in a variety of situations, going outside, catching the edge and turning up field and running up the middle.

Bolu Olorunfunmi had a solid spring and is, in my mind, the leader in the clubhouse, but Stephens is hot on his tail.

Stephens also is in the mix at the kickoff returner.