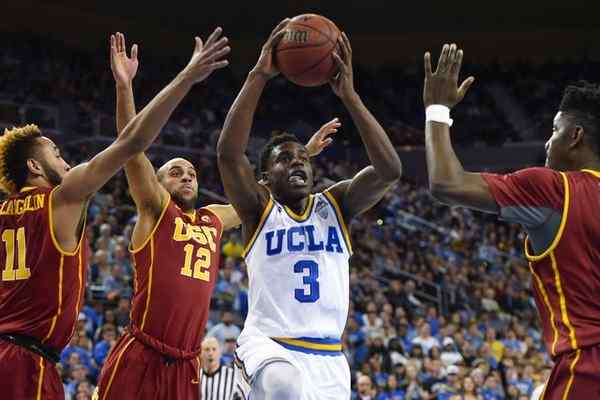 Aaron Holiday’s future in the NBA is murky, but so is his role if he returns to UCLA. (Thomas Cordova/SCNG)

As Aaron Holiday decides whether to make the jump to the NBA, there is more to analyze than just his draft stock. The sophomore guard is assuredly taking a hard look at what type of situation he would land in back at UCLA.

Holiday, who showed solid development as a point guard last season despite the presence of the nation’s assist leader on his own team, could be passed over by another freshman point guard in identical fashion. Lonzo Ball ran the show for UCLA before departing for the NBA and the possibility exists for McDonald’s All-American Jaylen Hands to do the same next season.

Holiday has declared for the NBA draft, but has until May 24 to withdraw his name and return to UCLA. He is not currently projected to be among the 60 NBA draft picks on June 22.

Were he to return, UCLA coach Steve Alford could conceivably toss Holiday the keys and not think twice about it. There is an argument to be made that he has earned it.

After starting as a freshman, Holiday took a reduced role last season but still averaged 12.3 points and 4.4 assists in 26.4 minutes per game. He also increased his shooting percentage by nearly 10 percent from his freshman year.

The third – and most likely – scenario should Holiday return to UCLA includes him and Hands starting in the same backcourt. Alford touted that his up-tempo offense last season allowed any of the four guards in his rotation to run the point. His two best guards next season could both be point guards. Holiday and Ball played together plenty last season. There’s no reason Holiday and Hands can’t do the same.

Hands, however, isn’t Lonzo Ball. Nobody is. Ball could be a transcendent player and he has the college assist records to suggest that type of ceiling. But it’s not a stretch to say Hands could be a one-and-done caliber player impossible to keep off the court.

NBA scouts likely want to see Holiday run a team before they spend a draft pick on him. The chances he’ll get to do that next season aren’t as great as he’d like them to be. But it seems like a safe bet Holiday will handle a significantly larger portion of the point guard duties than he did last season, especially in half-court sets.

The argument for Holiday begins with his experience. Hands is not only a freshman, but he is more of a scoring point guard than Ball, making it less necessary for him to exclusively run the point. Holiday has a two-year head start in Alford’s offense.

Holiday may have just declared for the NBA draft so that he could gather information about how he can make himself a more attractive prospect next year. It would be nothing short of shocking if he didn’t pull out of the draft and return to UCLA for his junior season. But he’d probably like a more clear path to the Bruins’ starting point guard position.