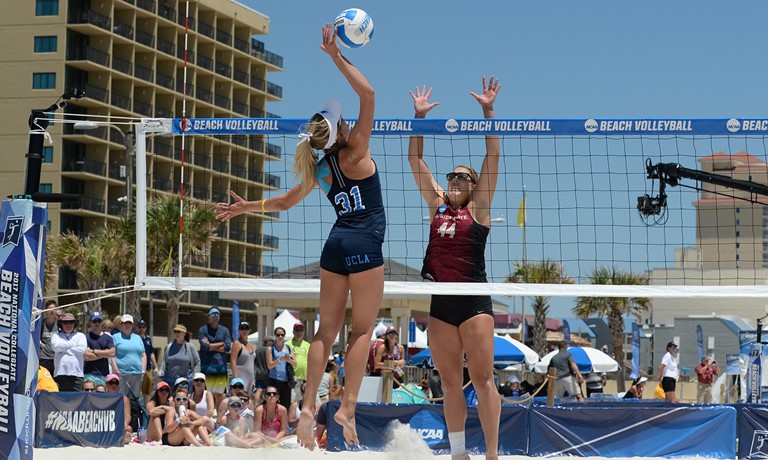 UCLA’s Megan McNamara spikes the ball against Florida State at the NCAA tournament on Saturday. (Photo by Kamp Fender)

UCLA’s run at a national title ended Saturday morning as No. 4 Florida State handed the Bruins a 3-1 defeat in the contenders’ bracket at the NCAA beach volleyball tournament in Gulf Shores, Ala.

Against the Seminoles, Elise Zappia and Torrey Van Winden earned UCLA’s only dual point with a straight set win on court No. 3.

With the second seed, UCLA (30-6) mustered only one victory in the NCAA tournament. Head coach Stein Metzger called Pepperdine and Florida State “two freight trains” that ended UCLA’s best season in school history prematurely. In each of their two losses this weekend, the Bruins lost three of the five first sets and couldn’t recover from slow starts against top competition.

“I’m really proud of our team,” Metzger told Pac-12 Networks. “We’ve grinded all year long and we made great strides in the past two years. We just want to be in the conversation every year and i think we were this year.”