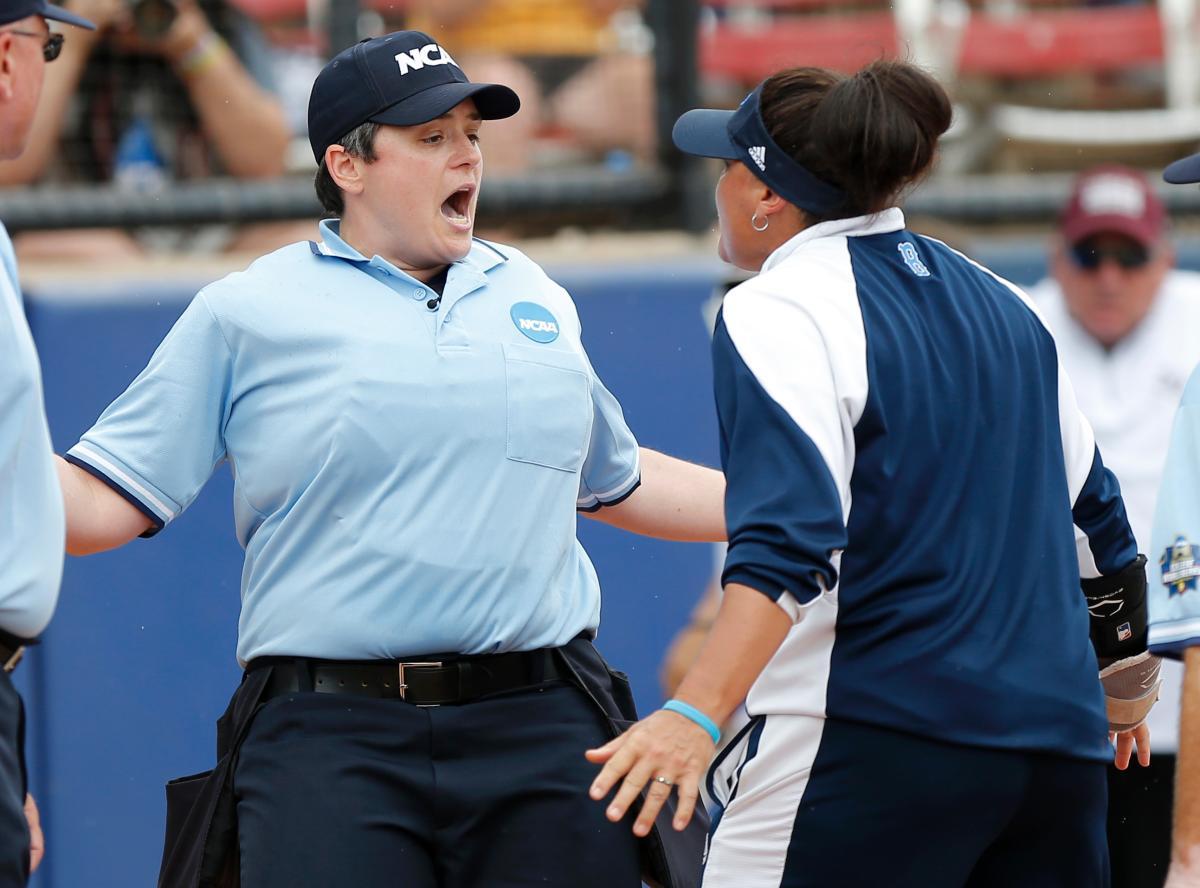 UCLA assistant coach Lisa Fernandez was ejected during the sixth inning of the softball team’s 8-2 win over Texas A&M at the WCWS. (AP photo)

Lisa Fernandez made contact with an umpire after the UCLA softball team’s assistant coach was ejected during the Bruins’ 8-2 win over Texas A&M in the Women’s College World Series Saturday morning. She will be suspended two games as a result of the contact, according to NCAA Softball Secretary and Rules Editor Vickie Van Kleeck.

Fernandez, one of the most famous pitchers to ever play softball, has coached at alma mater UCLA for 15 years. If UCLA is eliminated from the WCWS by Washington Saturday evening, Fernandez will also be suspended for the first game of next season.

The play that led to the ejection occurred in the sixth inning when UCLA senior Gabrielle Maurice hit her head on the ground trying to touch home plate. Fernandez was arguing that she was obstructed by the Texas A&M catcher, who made contact with Maurice as she fielded a throw and tagger Maurice on the face.

“What you saw with myself and Coach Fernandez is I’m not going to tolerate allowing the players to put themselves in position to possibly get hurt,” Inouye-Perez said. “That is ultimately the job of the officials. We all simply had each other’s backs.”

Obstruction is a particularly sensitive subject for UCLA, which lost Thursday’s WCWS opener on an obstruction call against UCLA catcher Paige Halstead that awarded LSU the winning run in a 2-1 victory.

The rule states that a runner’s path cannot be impeded by a player who isn’t in the act of catching the ball or already has possession of the ball. Van Kleek addressed the difference between Thursday’s obstruction call on UCLA’s catcher and Saturday’s play where obstruction was not called on the Texas A&M catcher.

“What happened on Thursday was a situation that falls under a possible obstruction where the catcher was positioned in front of the plate and in the judgment of the umpire, she must determine if she’s in the act of catching the ball.”

By comparison, the ball clearly arrived earlier to Halstead on Thursday than it to the Texas A&M catcher on Saturday. The difference between the two plays may have been that Texas A&M’s throw to the plate seemed to draw the catcher more toward the baseline than UCLA’s did.

“Well, the rule is stated that if the runner has to alter her path to the plate, then obstruction is definitely an option, is a judgment call,” Inouye-Perez said. “Gaby (Maurice) clearly altered her path to the plate. Gaby clearly had to go back door and literally pounded her head trying to get around the catcher to get to the plate. So I’m obviously not very clear about how that call is being made.”