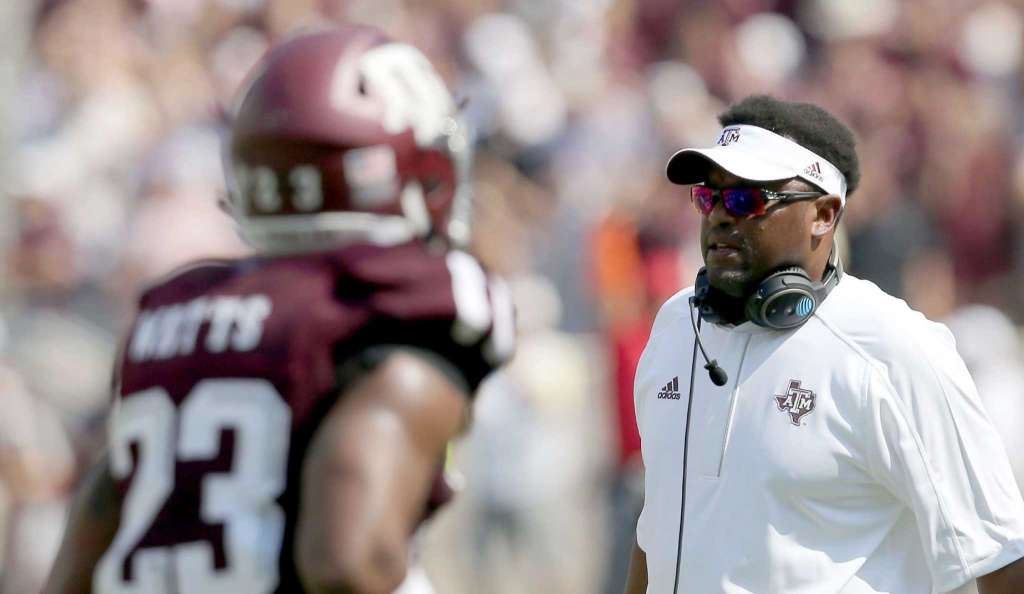 With 12 days until UCLA takes the stage at Pac-12 Media Days at Hollywood and Highland, it’s about time we start looking ahead to football season. Each day, we’ll examine a UCLA opponent and outline possible storylines for the matchup. Let’s start from the top:

The heat rises under Kevin Sumlin’s seat as Texas A&M’s record remains the same. The Aggies have had three straight 8-5 seasons and have yet to win a division title entering their sixth year in the SEC.

Strong starts followed by consistent November collapses have doomed the Aggies (8-5, 4-4 SEC in 2016) to mediocrity. Texas A&M’s upset victory over then-No. 16 UCLA in the season opener last year propelled the Aggies to a No. 4 ranking in the first College Football Playoff rankings before they went 1-3 in November and lost the Texas Bowl to Kansas State.

Flooded with questions at SEC Media Days about his job security, Sumlin said he already feels the most pressure to win from himself.

“Nobody wants to win more than me,” the head coach said this past week.

— Same game, different place: UCLA gets a do-over for last year’s overtime loss, and this time, it’ll be at the Rose Bowl. The Bruins haven’t lost a season-opening game at home since 2004. UCLA quarterback Josh Rosen threw three interceptions against the Aggies in Kyle Field, but didn’t throw any during the three home games he played before suffering a season-ending shoulder injury. In fact, of Rosen’s 16 career interceptions, only four have come in the Rose Bowl.

— Quarterback questions: Texas A&M has three quarterbacks, but no clear starter between senior Jake Hubenak, redshirt freshman Nick Starkel and top recruit Kellen Mond. Hubenak, who started his career as a walk-on at Oklahoma State, is the only option with game experience. He started two games last year when Trevor Knight went down with a shoulder injury and nabbed with a win against UTSA and a loss to Ole Miss. Mond was a five-star dual-threat quarterback from IMG Academy according to Rivals.com and ended up in College Station after Texas A&M’s brief flirtation with former Baylor quarterback Jarrett Stidham ended with Stidham transferring to Auburn. Starkel held an offer from UCLA out of Liberty Christian High in Argyle, Texas, but chose the home-state Aggies.

— Respite for Rosen?: The Texas A&M defense, led by defensive ends Myles Garrett and Daeshon Hall, terrorized Rosen in last year’s game. The UCLA quarterback was sacked five times while the Aggies piled up 10 total tackles for loss. With Garrett and Hall both onto the NFL, Texas A&M will have to look elsewhere for pass rush. UCLA’s much-maligned offensive line will have a chance to show improvement against a weakened Texas A&M front.

— WR Christian Kirk: Kirk is Texas A&M’s only returning receiver. But he is a good one. The junior from Scottsdale, Ariz., led the SEC in receptions last year with 83 and had three punt returns for touchdowns, the most in the country. He earned all-conference honors at three positions — receiver, all-purpose and return specialist — and was named a preseason first-team All-SEC selection in those positions Friday.

— RB Trayveon Williams: Although the Aggies will have an inexperienced quarterback, their starting signal-caller will receive a big boost from Williams. He was the first true freshman in Texas A&M history to rush for 1,000 yards. After racking up 1,057 yards and 10 touchdowns on the ground last year, Williams was named to the True Freshman All-America Team by ESPN and the Freshman All-SEC Team.

— S Armani Watts: Watts’ decision to return for his senior year was a big boost for a defense that will lose about half of its starting lineup. With cornerback Nick Harvey expected to miss the entire year due to a knee injury, Watts is one of only two returning starters in the secondary. Cornerback Priest Willis returns with seven starts in 2016. Last year, Watts missed four games due to a knee injury, including the final three, and compiled 56 tackles, one sack, two interceptions and two forced fumbles. He’s the team’s leading active tackler with 241 in his career.