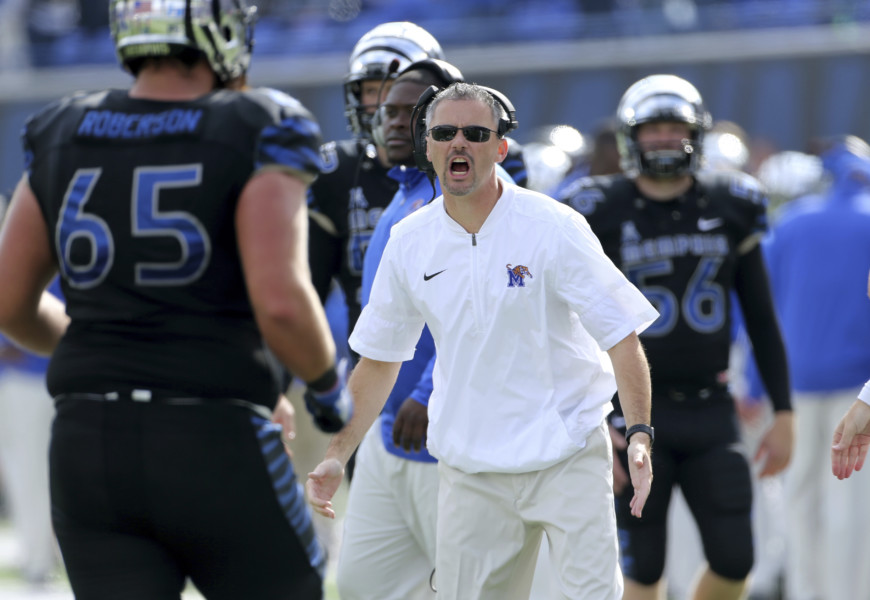 Memphis is on the rise. The Tigers (8-5, 5-3 AAC last year) are 27-12 in the past three seasons. Head coach Mike Norvell didn’t lose much ground during his first year replacing Justin Fuente, who left for Virginia Tech after leading the Tigers to 10 and nine wins in 2014 and 2015, respectively. In a Group of 5 conference always ripe with underdogs, Memphis is gaining momentum as a contender for this year’s favorite sleeper.

“The fact that people are giving us attention is a compliment to our program and a compliment to the young men that we have in it and where we’re going,” Norvell told The Commercial Appeal. “But preseason expectations, they really don’t stand for anything unless you go out and do it on the field.

— Trapped: UCLA’s only nonconference road game could be its trickiest. The Tigers have the look of a team that’s ready to break through with nine returning starters on the AAC’s third-highest scoring offense. They’ve only lost four times at home in the past three years, and Norvell, a former Todd Graham assistant at Arizona State has had success against the Bruins before. During his four years as Graham’s offensive coordinator in Tempe, the Sun Devils averaged 518.5 yards and 36.5 points per game against the Bruins.

— Strength on strength: Despite losing major pieces at every level, the UCLA defense again looks like it’s going to be the team’s strength. With school record-holders returning at quarterback and receiver, Memphis packs most of its punch on offense. The UCLA defense held up against good offenses last year, dragging the team’s much-maligned offense along for the ride, and will have to face another potent group in Memphis to help the Bruins get the win.

— Rip returns: UCLA tight end coach Rip Scherer was the head coach at Memphis from 1995-2000. He compiled a 22-44 record, but led the Tigers to their first-ever win over Tennessee, in 1996 when the Volunteers were ranked sixth in the country with Peyton Manning at quarterback.

— QB Riley Ferguson: In his first year as a Division I starter, Ferguson set the Memphis record for touchdown passes in a season with 32 while throwing for 3,698 yards with a 63.2 percent completion percentage. He started his career at Tennessee, but transferred to Memphis through Coffeyville Community College in Kansas.

— S Jonathan Cook: The Tigers only have four defensive backs with meaningful defensive experience and Cook is the best of them. He led the team in total tackles last year from his safety position with 88 while adding 5.5 tackles for loss, one interception and one fumble recovery. Cook and will pair with fellow senior safety Shaun Rupert, a Missouri transfer who didn’t start, but played in every game last year, to lead an inexperienced secondary.

Memphis in a GIF