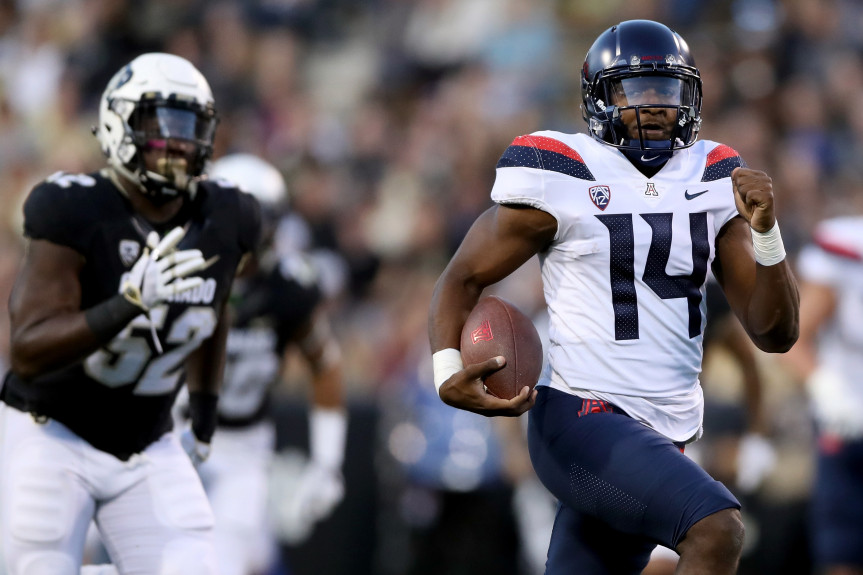 Quarterback Kahlil Tate #14 of the Arizona Wildcats scores a touchdown against the Colorado Buffaloes at Folsom Field on October 7, 2017 in Boulder, Colorado. (Photo by Matthew Stockman/Getty Images)

While UCLA spent a week at home during its bye, its next opponent, Arizona, picked up its first Pac-12 road win since 2015 with a breakout performance from backup quarterback Khalil Tate.

Coming in for injured starter Brandon Dawkins, Tate, a Gardena Serra alumnus, set the FBS record for rushing yards by a quarterback with 327 in Arizona’s 45-42 win over Colorado. He ran for four touchdowns and threw for one more on 11-of-12 passing for 142 yards in his first game action since suffering a sprained shoulder last month.

When asked if Tate would be Arizona’s starter going forward, including next Saturday’s game against UCLA in Tucson at 6 p.m., head coach Rich Rodriguez told reporters: “It’s hard to justify not starting him after this, right?”

The 18-year-old sophomore made his college debut last year against UCLA when injuries forced the coaching staff to burn his redshirt. He was 5-of-9 passing for 72 yards and two touchdowns and led the team in rushing with 79 yards on 15 carries. The Bruins won 45-24.

What other teams in the Pac-12 did Saturday: