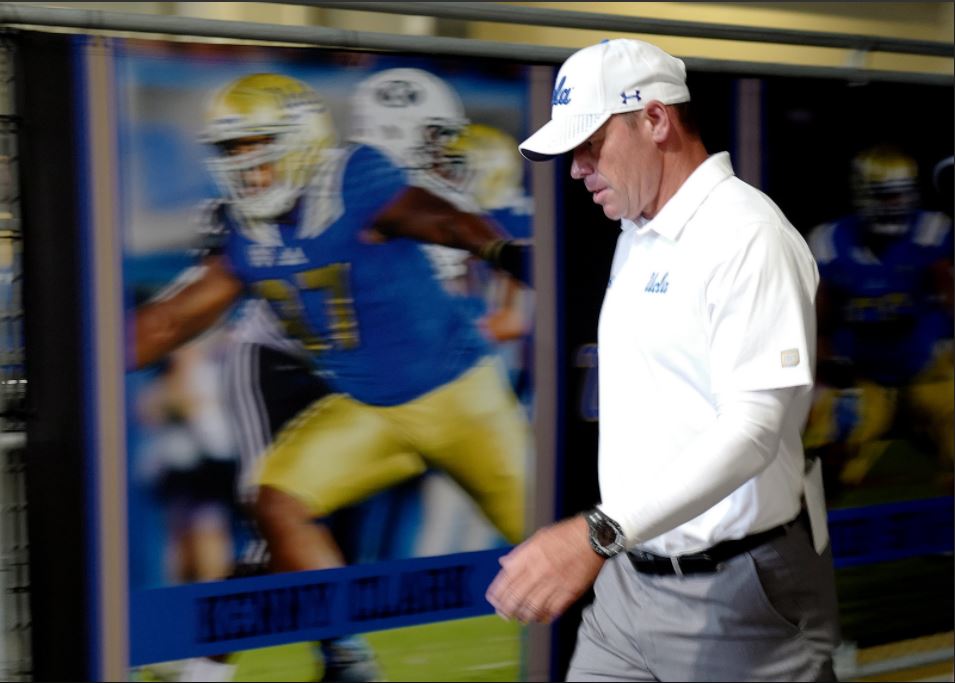 UCLA Bruins head coach Jim Mora walks back toward the lock room at half time during a NCAA college football game against the Texas A&M Aggies at the Rose Bowl in Pasadena, Calif., Sunday, Sept. 3, 2017. (Photo by Keith Birmingham, Pasadena Star-News/SCNG)

College football players remain in the locker room until the coin toss, shielding UCLA from the same controversy swallowing NFL players who kneel during the national anthem as a way to protest racial injustice.

Head coach Jim Mora was asked about the issue Monday during his weekly press conference, specifically whether he has discussed it with his team or if the players have approached him about possibly doing something during games. Here’s what he said, in full:

“No one’s mentioned anything to me and I haven’t heard much talk about it. It’s not really on our radar right now. We’re in the locker room and I’m sure everybody has their own opinion and their own take on it and I think it’s important to respect everybody’s opinion and everybody’s take and we try to do that at UCLA in a very educational way. We’re all about freedom of speech and freedom of expression but we’re also about respecting our country and respecting our military.

“My personal opinion is that kneeling when they’re playing the national anthem doesn’t necessarily mean that you’re being disrespectful to the flag nor to the military. I think that people find ways to make statements. That’s what this country is about and has always been about and I think we have to respect each other. I know that our young men, if they were given that opportunity, would be very respectful.”

Members of the UCLA women’s soccer team took a knee during the national anthem prior to a game against Oregon State on Oct. 1. Head coach Amanda Cromwell told Pac-12 Networks after the game that the team met, decided to kneel prior to the anthem together and allow some players to continue kneeling if they chose.

“It’s about supporting the cause of racial justice and equality in the world,” Cromwell said.

“It’s about supporting the cause of racial justice & equality.”

Some @UCLAWSoccer players knelt during the national anthem at today’s game. pic.twitter.com/yvESj5o6Lq

“It’s an honor to coach this team and have these conversations because they’re really important to have,” Cromwell told Pac-12 Networks.