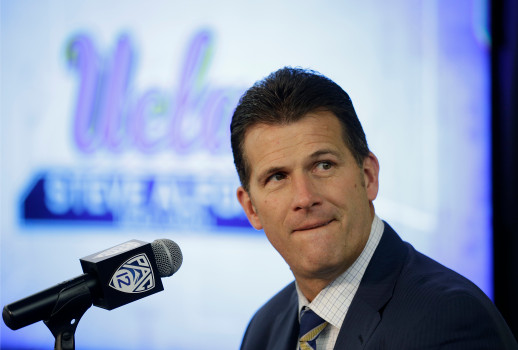 With nearly half of its freshman class confined to a luxury hotel more than 100 miles away, the UCLA men’s basketball team survived a late comeback attempt from Georgia Tech in Shanghai, China to win its season opener 63-60 on Friday night.

Freshmen LiAngelo Ball, Cody Riley and Jalen Hill were arrested for shoplifting Tuesday and will likely not accompany the team back to Los Angeles, ESPN reported Friday during the game. After getting out of jail Wednesday, the trio was instructed to stay in the team’s former hotel in Hangzhou until the legal proceedings are completed.

LiAngelo Ball, Cody Riley and Jalen Hill will remain in Hangzhou and not be on the UCLA team flight back to Los Angeles on Saturday night, multiple sources tell ESPN. They could be in Hangzhou for “a week or two” according to another source familiar with the investigation.

Ball, Hill and Riley were questioned for allegedly stealing sunglasses from a Louis Vuitton store next to their hotel in Hangzhou, but ESPN reported that there is surveillance video of the players shoplifting from multiple stores in a nearby high-end shopping center. In China, the punishment for stealing is directly tied to the value of the stolen goods, according to several Chinese law experts.

A source familiar with the investigation says there is surveillance footage of the players shoplifting from three stores inside of a high-end shopping center next to the team’s hotel in Hangzhou, which includes Louis Vuitton, Gucci, Yves Saint Laurent and Salvatore Ferragamo.

Head coach Steve Alford declined to comment specifically on the status of the three players, but when asked about how their absences affected the game, Alford told reporters, “We just move on.”

“I really appreciate these guys, Aaron and Tom,” Alford continued at the postgame press conference where he was joined by UCLA’s two most experienced players. “They have done a really great job with leadership on our team.”

Holiday struggled early, but scored seven of UCLA’s final eight points to keep the Yellow Jackets at arm’s length. Georgia Tech clawed back from an 11-point deficit at the 11:02 mark in the second half and got within two points with 19.9 seconds left, but missed two 3-pointers in the final seconds.

Georgia Tech center Ben Lammers led the Yellow Jackets with 24 points on 11-for-18 shootings with 10 rebounds.

“The whole game, I was just trying to see what I could get, basically,” Holiday told reporters. “I just took my time and let the game come to me and then I was able to get to the basket a couple times to help my team win.”

Pac-12 commissioner Larry Scott said UCLA and conference officials were staying with Ball, Hill and Riley at the hotel. He said on the ESPN broadcast that “it’s hard to anticipate exactly what’s going to happen” during the legal process, but added that UCLA and the players have legal representation and the trio is “comfortable in a hotel waiting for the investigation to take place.”

“We’re certainly disappointed that a situation has arisen that has distracted from all the amazing experiences that the student athletes are having here,” Scott told TV broadcasters Roxy Bernstein and Bill Walton, who were calling the game.

Walton, a famed UCLA alumnus, addressed the issue early in the broadcast.

“I am sad, disappointed and embarrassed,” Walton said. “This is a very big deal. The noble purpose here has been stained. … I want to apologize right now on behalf of the human race for this travesty.”