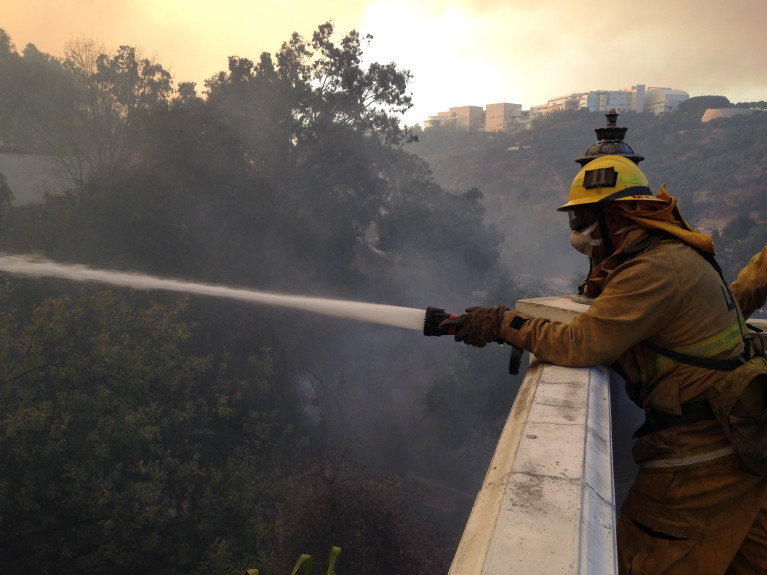 A Los Angeles firefighter battles the Skirball fire Wednesday, Dec. 6, 2017, in the Bel-Air area. The blaze prompted the shutdown of the 405 Freeway and burned at least two homes. (Photo by Ed Crisostomo/Los Angeles Daily News)

UCLA canceled its men’s basketball game against Montana at Pauley Pavilion on Wednesday due to concerns about area wildfires.

A fast-spreading wildfire, dubbed the Skirball Fire, began early Wednesday morning in the Sepulveda Pass near the Getty Center, shutting down lanes on the 405 Freeway. It is the fourth fire blazing through Southern California as the Thomas, Creek and Rye Fires burn through Ventura County and the San Fernando Valley.

“The health and safety of student-athletes, staff and fans is our top priority,” the school wrote in a statement provided by the athletic department.

Single-game ticket purchases for the game will be automatically refunded and season-ticket holders will automatically receive a credit for the cost in their UCLA ticket account, the school said.

All other UCLA team workouts and practices scheduled for Wednesday have also been canceled.

The men’s basketball team next plays Saturday against Michigan in Ann Arbor, Mich.

For more updates on all the area wildfires, click here.