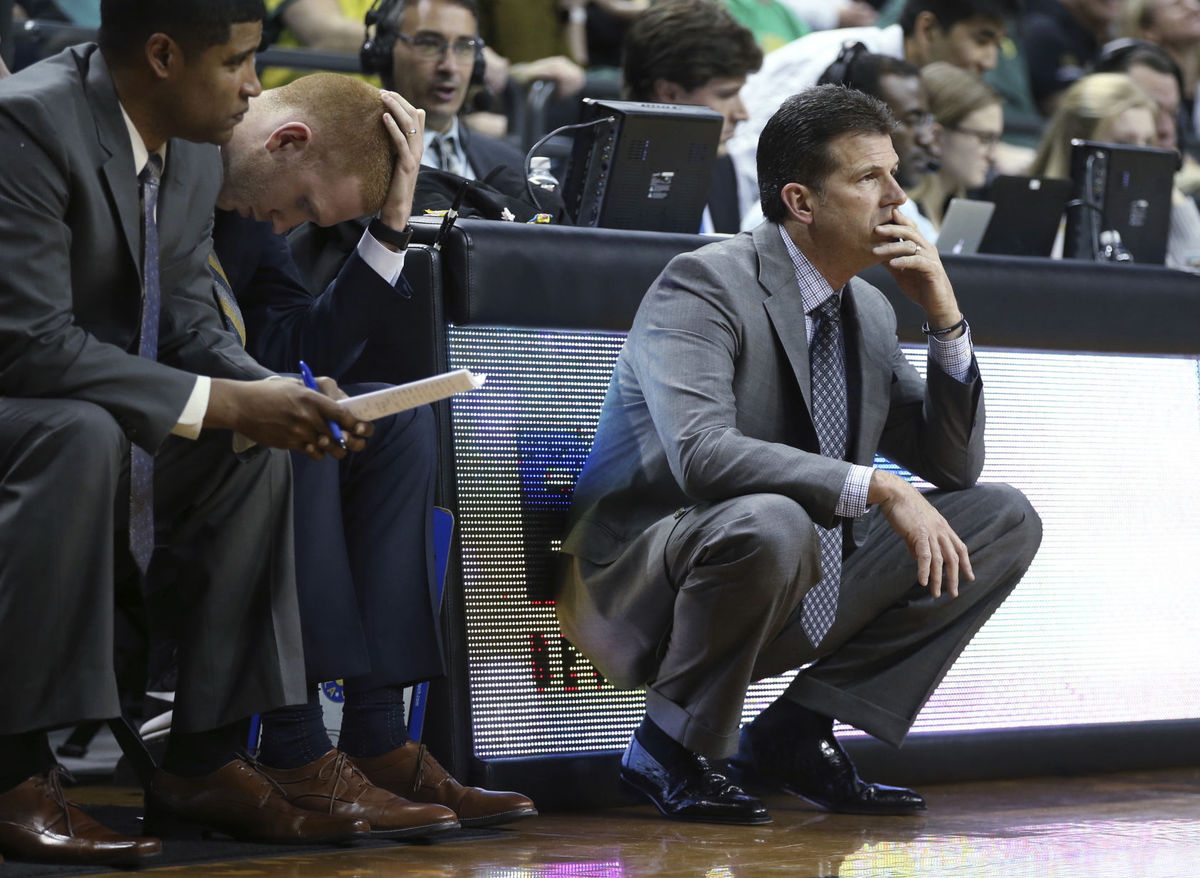 UCLA coach Steve Alford, right, watches from the bench as his team falls behind Oregon during the first half of an NCAA college basketball game Saturday, Jan. 20, 2018, in Eugene, Ore. (AP Photo/Chris Pietsch)

Steve Alford covered his face with both hands. The sight of UCLA’s third loss was almost too much to bear before the head coach wiped both hands down to his sides in frustration.

Alford watched his UCLA team whittle an 18-point lead down to one three times in the final 69 seconds against Oregon on Saturday to only walk out of Matthew Knight Arena with a third straight loss as the Ducks survived at the free throw line to win 94-91.

Junior guard Aaron Holiday played only 10 minutes in the first half after he picked up three fouls, one which came after referees assessed double technicals to Holiday and Oregon’s Elijah Brown. Without their leader, the Bruins (13-7, 4-4 Pac-12) gave up 52 points in the first half, the most for a half allowed by UCLA this season.

UCLA had nine first-half turnovers, five from freshman Jaylen Hands, while Oregon (13-7, 3-4 Pac-12) had none.

Back-to-back Oregon 3-pointers pushed the lead to 18 with 15:29 to go, but the Bruins slowly chipped away. They made nine straight field goals. Holiday’s layup in traffic cut the deficit to one with 1:09 left.

The teams traded turns at the free-throw line, and while Oregon didn’t get a single field goal in the final 3:34, it scored its final eight points on free throws.

Holiday had 14 points, five assists and four turnovers in 30 minutes. Freshman guard Kris Wilkes led the Bruins with 21 points, 16 of which came in the second half and senior center Thomas Welsh had 17 points and 10 rebounds.

With its third consecutive loss, UCLA tumbled to fifth place in the Pac-12. The Bruins return to Pauley Pavilion searching for a streak-busting win against Cal on Thursday at 7:30 p.m.