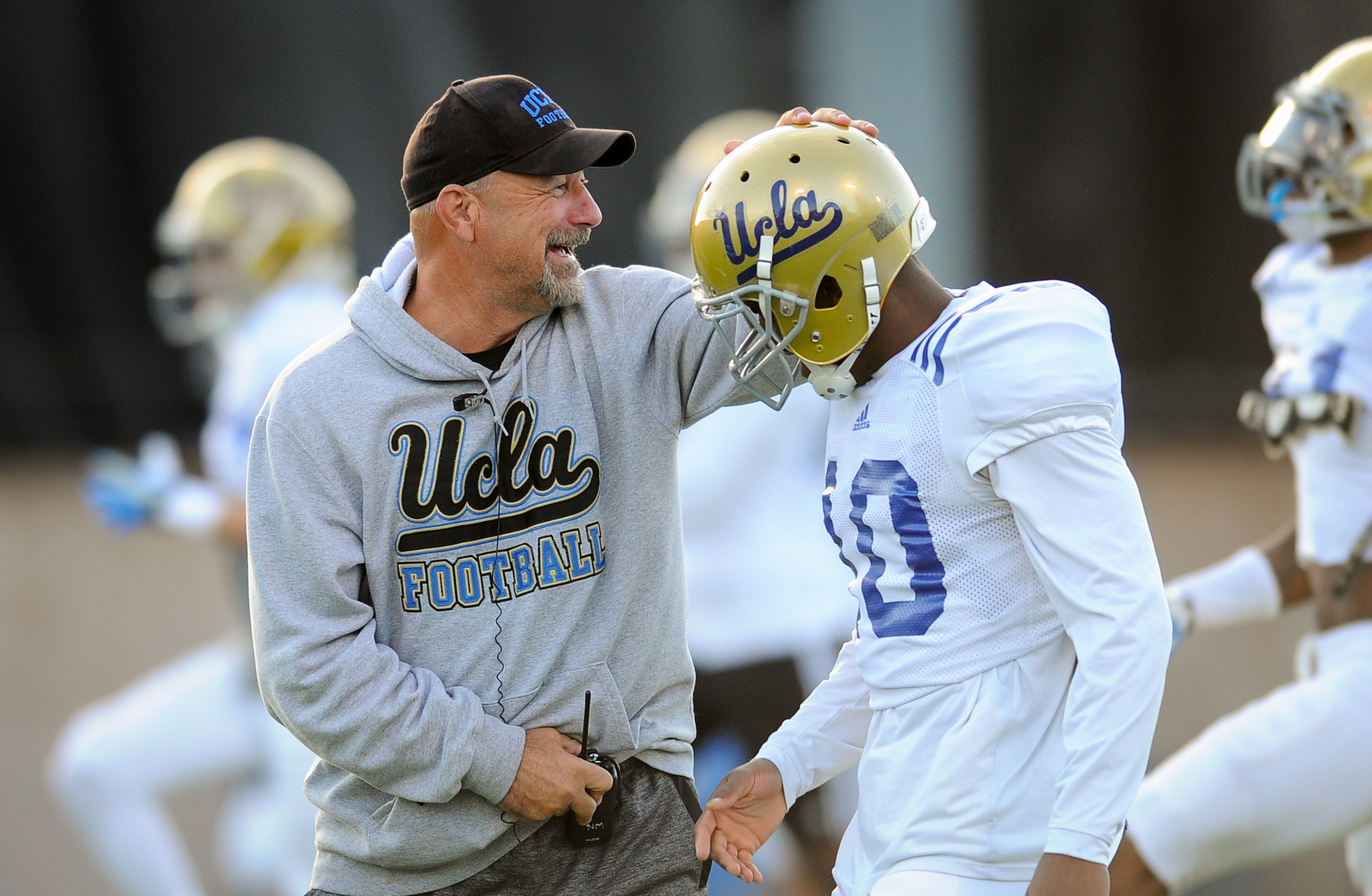 UCLA paid its assistant football coaches just under $3.97 million in 2015. That figure, according to USA Today’s database, puts the Bruins at the top of Pac-12 public schools.

Oregon had the next-highest assistant payroll among Pac-12 public schools, doling out just over $3.69 million. Washington, Arizona State and Arizona were the only others to top $3 million.

As private schools, Stanford and USC were not required to disclose assistant coach contracts.

UCLA offensive line coach Adrian Klemm will be suspended for the first two games of the 2015 season, the school announced on Friday.

The assistant coach was initially suspended with pay back in March due to allegations of NCAA rules violations. The Bruins reinstated him on June 19 while it continued working with the NCAA in its investigation.

UCLA, which self-imposed these sanctions, said that Klemm was also fined an undisclosed sum. The Bruins had reduced recruiting days by 10 percent this past spring, and will also lose two official visits next year.

The school said it is continuing to cooperate with the NCAA’s review of the matter and declined further comment. While Klemm will be allowed at practices, the team’s plan for replacing him for its first two games is still uncertain.

“It’s something that we’ll sit down and talk about,” said head coach Jim Mora. “I feel very confident that we have the men in place to make it work, whatever direction we go in.”

Fred Ulu-Perry hasn’t played center since the eighth grade. So, when he moved to the position at the start of UCLA’s training camp, there were a few struggles.

For instance, the snaps. When fourth-year starter Jake Brendel left Monday night’s practice with an undisclosed injury, the freshman moved up to first string — making it tougher for his quarterback to catch the ball.

“You’re talking about a kid that hasn’t done it before,” said offensive line coach Adrian Klemm. “What we do is unique. Most places, you come in with a base defense for a week and you get to learn things, get through everything in the first day. He’s learning on the run, so we’re kind of going backwards. …

“He’s embraced everything. He’s picked it up, hasn’t complained one bit.”

Klemm also said the Ulu-Perry entered the program much stronger than most true freshman linemen. There’s certainly time for him to develop more; Brendel dressed for practice on Tuesday afternoon, and doesn’t appear to be in danger of missing games.

And while Ulu-Perry will likely also practice at guard, the Hawaiian native has his sights set on becoming Brendel’s successor next season.

“I want to be that guy,” he said. “That’s the bull of the team right there on the offensive side. That’s the leader of the team. That’s like the second quarterback.”

Junior Caleb Benenoch offered some interesting thoughts yesterday on the UCLA offensive line, including how he and his teammates might actually benefit from having a less mobile quarterback to protect.

A few other points from his media session:

— “Paul Perkins, in my opinion, is the best running back in the country. He does everything perfectly. There’s no gray area with him. It’s black and white. He just goes, every play.”

— Benenoch said he didn’t have a preference in the quarterback race, and that Jerry Neuheisel and “J-Chosen” are both making good plays in practice.

— Benenoch was mostly sidelined in spring camp recovering from a leg surgery, while offensive line coach Adrian Klemm was suspended until from March to June due to allegations of NCAA rules violations.

“It was kind of tough on both of us,” Benenoch said, “I’m happy he’s back. He’s our mentor. He’s like our big brother. He’s not that much older than we are. We have a lot of fun with him, he has a lot of fun with us. He pushes us to be the best that we can be, so I love having him back.”