UCLA has just one more chance to leave the Battle 4 Atlantis with a win.

The No. 22 Bruins opened the tournament in the Bahamas with double-digit losses to Oklahoma and No. 5 North Carolina, looking nothing like a team that should be ranked in the Associated Press poll. After a 78-56 dismantling at the hands of the Tar Heels, UCLA now falls the the seventh-place game against the University of Alabama-Birmingham, which tips off Friday at 7:30 p.m. PT on AXS TV.

The 22-point margin of victory was UNC’s largest against a ranked opponent since 2008. An even uglier milestone was marked by the Bruins’ own carelessness with the ball: they coughed up 23 turnovers against seven assists, the team’s worst single-game ratio since 1996. END_OF_DOCUMENT_TOKEN_TO_BE_REPLACED 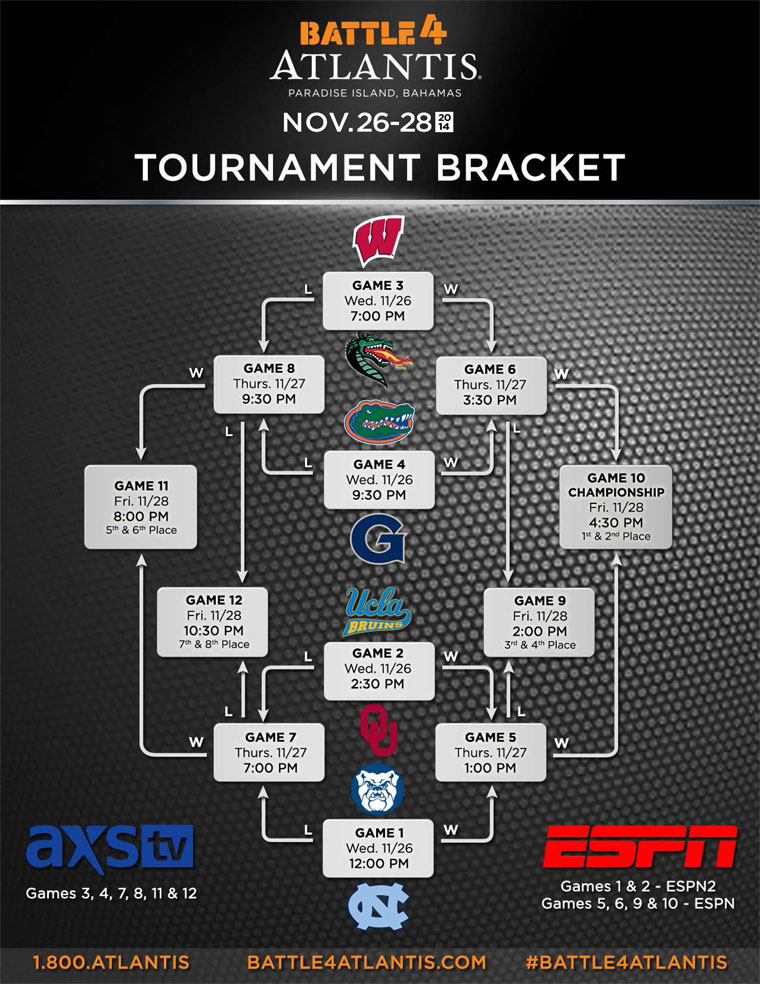 The Battle 4 Atlantis released its bracket this morning, slotting UCLA into what may be the tournament’s best opening-round game.

After its first Sweet Sixteen appearance since 2008, UCLA’s young lineup features just one returning starter in Norman Powell, but adds a trio of touted freshmen in forwards Kevon Looney and Jonah Bolden, as well as center Thomas Welsh. Oklahoma will be the Bruins’ first test away from Pauley Pavilion.

The winner will advance to play either Butler or North Carolina.

After a four-game homestand at Pauley Pavilion against Montana State, Coastal Carolina, Nicholls State and Long Beach State — none of which ranked top 150 in RPI last season — the Bruins head to the Bahamas for a star-studded nonconference tournament.

The Battle 4 Atlantis on Thanksgiving week is the type of heavyweight competition that second-year head coach Steve Alford has openly pined for since arriving in Los Angeles. Matchups haven’t been finalized for the three-game slate, but UCLA is in a field that includes Florida, Wisconsin, North Carolina, Georgetown, Butler, Oklahoma and Alabama-Birmingham (UAB).

The Gators and the Badgers both made the Final Four this past season, while the Tar Heels and the Hoyas are among the sports bluebloods — even if neither team has been as formidable in recent years.

But UCLA will only host one major nonconference opponent: Gonzaga, whom the Bruins last faced in 2006’s all-time Sweet Sixteen thriller. The Bulldogs visit Pauley Pavilion on Dec. 13 to start a home-and-home series.

That’s followed by a huge Dec. 20 game against national runner-up Kentucky at the United Center as part of the CBS Sports Classic.

The Bruins will open Pac-12 play with five of their first seven games on the road, starting with a trip to Utah and Colorado on the Jan. 2-4 weekend. They will travel to Arizona and Arizona State on Feb. 18-22, but will not host either due to the conference’s schedule rotation.