Defensive lineman Boss Tagaloa talks about the leadership on defense, what Osa Odighizuwa and Chigozie Nnoruka bring to the line and how much body fat he’s lost since coming to Westwood.

Linebacker Josh Woods talks about being a leader as a 19-year-old junior and moving back to the weakside linebacker position.

Quarterback Josh Rosen talks about settling into the offense, his work at the line of scrimmage and who comes to the weekly lineman dinners.

Defensive lineman Boss Tagaloa talks about learning from Eli Ankou and Eddie Vanderdoes, what he wants to improve on and how he feels he’s adjusted to college football.

Kicker J.J. Molson talks about what happened on his three “unacceptable” misses, what it felt like to see his kick bounce off the top of the upright last week and the deal behind his shoes.

Linebacker Lokeni Toailoa talks about the freshman class, competing with Isaako Savaiinaea and Kenny Young at middle linebacker and the importance of enrolling early for spring.

Defensive lineman Boss Tagaloa talks about working with the senior defensive linemen, taking reps with the No. 1 group and how the freshman class is doing. 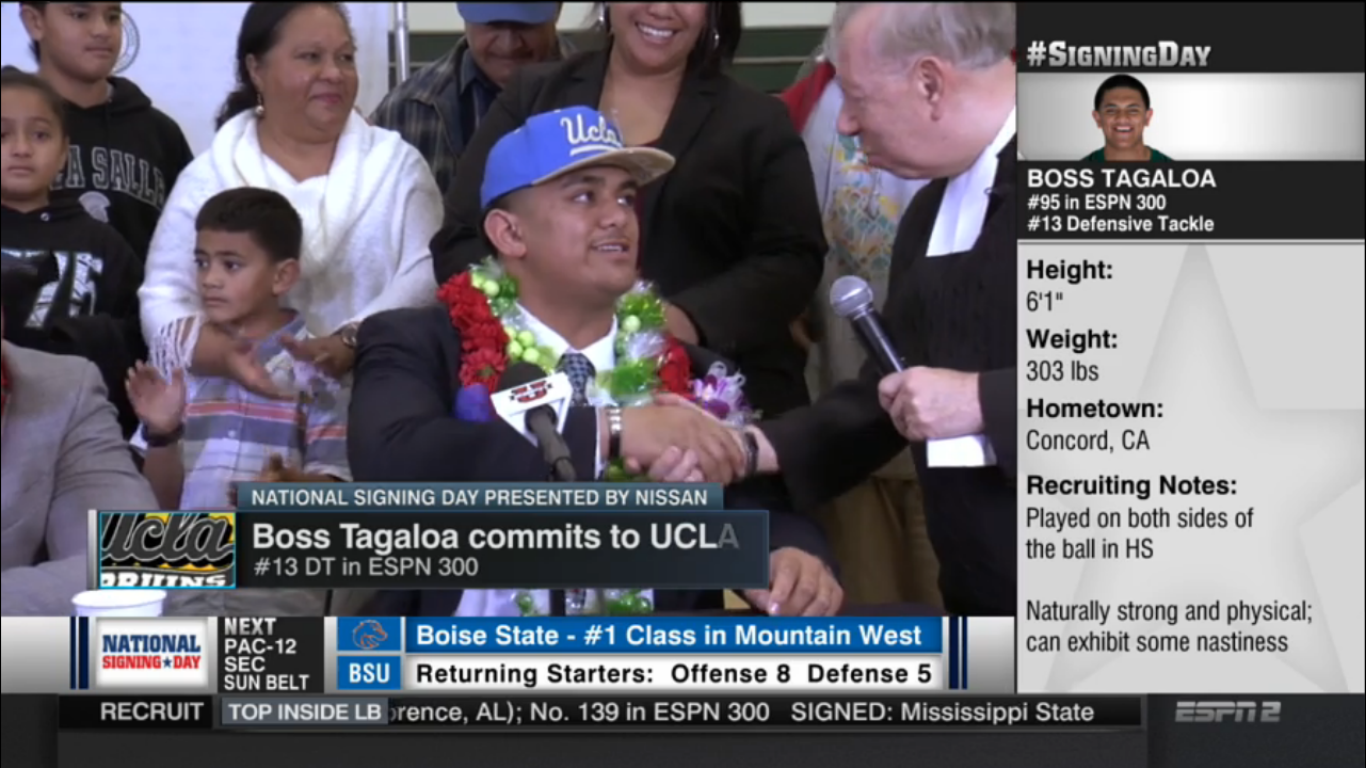 Regarded as one of the top-15 defensive tackles in the country — as well as one of the top 25 recruits in California at any position — Tagaloa has the potential to immediately plug into the Bruins’ rotation up front. Defensive line depth has been an issue for the team, which is returning former five-star recruit Eddie Vanderdoes from a torn ACL, but lost All-Pac-12 first-teamer Kenny Clark to the NFL draft.

Tagaloa was the last recruit to announce for UCLA on National Signing Day, doing so shortly after tight end Devin Asiasi — his Concord (Calif.) De La Salle teammate — picked Michigan over both the Bruins and USC.

Besides Asiasi and receiver Aaron Hansford, who opted for Texas A&M, Mora and his staff hit on just about every player they pursued down the final stretch.