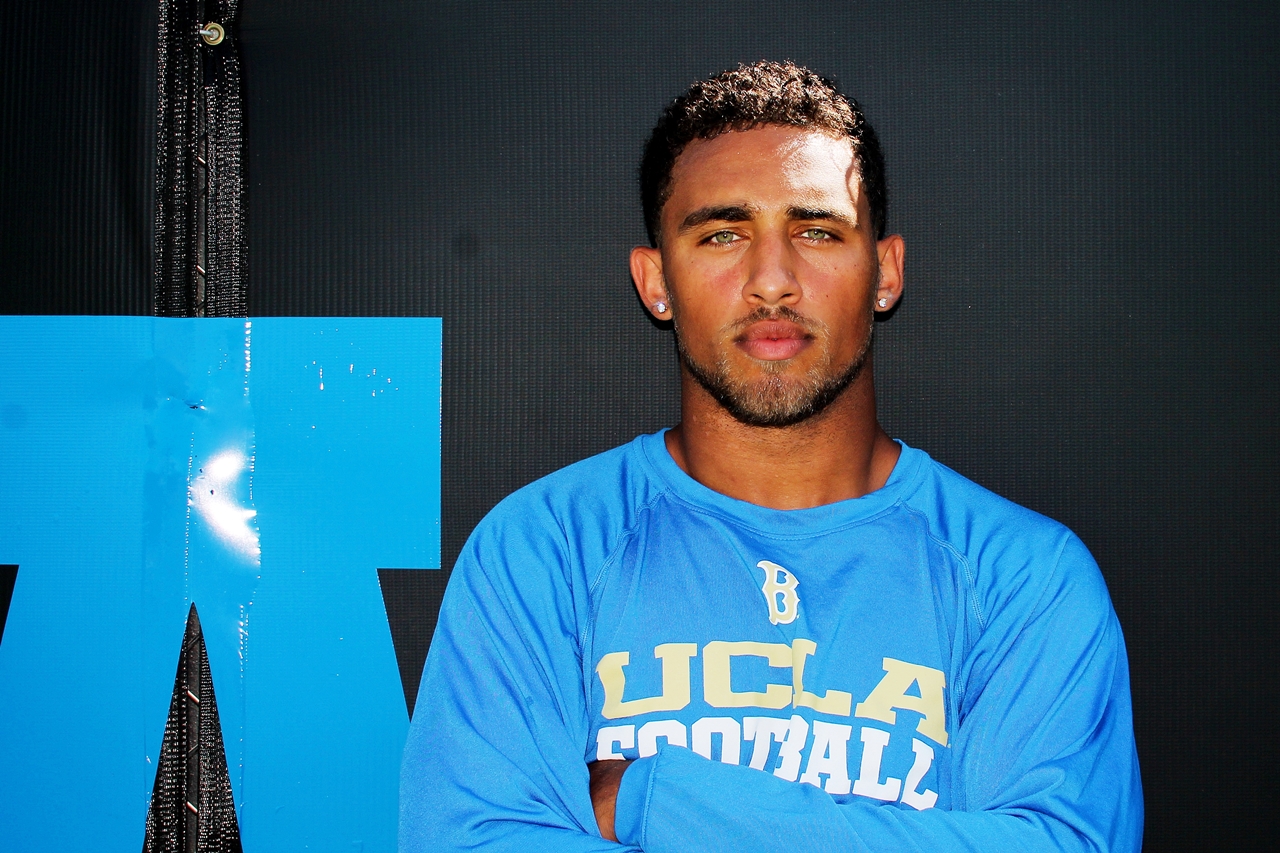 Several thousand fans pour down the Rose Bowl, swarming players for autographs and pictures on a cool April night. The UCLA football team has just wrapped up its annual spring game. Not thrilling football, but football nonetheless. The school announces a crowd of exactly 20,000.

Perhaps no one is happier to see them than Dietrich Riley. For the past 18 months, the former star recruit had been recovering from a frightening neck injury, one that erased what would have been his junior season.

He was ready for his comeback.

Riley hugs a teenage girl, then poses for a picture with two others. A spiky-haired boy comes up to him and requests an autograph on his replica jersey. The father asks Riley to write all the way across, and he obliges. All the way? Why not? He scrawls his name, filling the blank above the “1” — his number.

The 6-foot, 200-pound safety smiles as he soaks in the attention, his green eyes glistening. Riley believes he will return, his neck even stronger than it was before the injury. He practiced in spring with a red jersey on, but separated his shoulder when his arm got caught in a one-on-one drill. Only a minor setback, he says.

He does not know that his football career will officially end in three months.

Almost every anecdote from Dietrich Riley’s playing days involves hitting. He was always aggressive, so much so that his mother worried that other parents would complain.

Freshman Bruins safety Tyler Foreman, who idolized Riley when both played Pop Warner at Pasadena’s Victory Park, recalls the hit on Oregon State’s Jacquizz Rodgers in 2010 — one that popped off the tailback’s helmet. “It was one of the biggest hits I’ve seen in college football,” Foreman says.

It began on the front yard. END_OF_DOCUMENT_TOKEN_TO_BE_REPLACED

The Bruins heard the news at around 2 p.m., just a few hours before Thursday’s afternoon practice in San Bernardino. Arguably the most highly regarded of UCLA’s four freshman defensive backs, Willis has played well early on and should be a crucial piece of a secondary that returns no starters.

“He stands out,” head coach Jim Mora said. “He absolutely, positively can play corner at this level. He has the quickness. He has the burst. He’s got the length.”

— Safety Dietrich Riley is still working with the team as an undergraduate assistant. The junior had missed all of last season recovering from neck surgery, and took a medical retirement last month.

“I just think it’s important that we offer him that opportunity to see what he wants to do with his life,” Mora said. “For him to be out here with Tahaan (Goodman), with Tyler Foreman and some of those other (freshmen), it’s pretty selfless to me.

“He had big plans in terms of what his football career was gonna look like. It didn’t work out the way he wanted it. Rather than mourn, he’s just OK.” END_OF_DOCUMENT_TOKEN_TO_BE_REPLACED

CULVER CITY – If Anthony Barr’s growing hype can be distilled into a single sequence, it would be one on Nov. 17, 2012. That day, the UCLA linebacker blew through USC’s line untouched, crushing quarterback Matt Barkley on second-and-seventh.

“I want to know why the tackle just let me go, for whatever reason,” Barr said. “He should be standing up here and talking to you guys, because he’s the reason why I was able to make that play.” END_OF_DOCUMENT_TOKEN_TO_BE_REPLACED

UCLA safety Dietrich Riley has taken a medical retirement after missing all of the 2012 season due to a neck injury, ending the career of a once-touted four-star recruit. The Los Angeles Times first reported the news.

The 6-0, 200-pound rising junior would have been the most experienced member of the Bruins’ secondary, a unit that lost all four of last season’s starters. He had not played since colliding with Cal running back Isi Sofele in October 2011, an injury that required him to undergo single-level fusion surgery.

Riley had sounded optimistic about his chances to return, saying that his neck felt even stronger than it did before the operation. He also injured his shoulder during spring practices and was held out of most full-contact drills.

Dietrich Riley had already fought his way back from one injury. He didn’t think he’d suffer another just one week into UCLA’s spring camp.

After sitting out all of last season recovering from neck surgery, the rising redshirt junior safety separated his right shoulder on April 6 — just the third practice session this month.

Riley had gotten his arm caught up trying to pry the ball loose during one-on-one drills, and the pain he suddenly felt had him fearing the worse. He said he tried to think positively, but couldn’t contain all his emotions as the staff worked to pop his shoulder back in on the sideline.

“Sitting in that shade area with the trainer, I didn’t know what to expect,” he said. “I kind of broke down. I started crying because I’ve been working my tail off the whole offseason, just doing whatever I can to prepare myself mentally and physically. Then that accident happens.”

Luckily for him and the Bruins, the most experienced member of the secondary didn’t require surgery. Riley is gradually working back into practice with a red jersey. He said the shoulder feels fine, though he hasn’t gone full contact yet. He rehabs two to three times a day.

“He’s such a football-intelligent kid,” defensive backs coach Demetrice Martin said. “When we throw him back out there, it’s like he never fell off. It’s like riding a bike to him. The thing is, it’s going to be vital to get him back and get him healthy.”