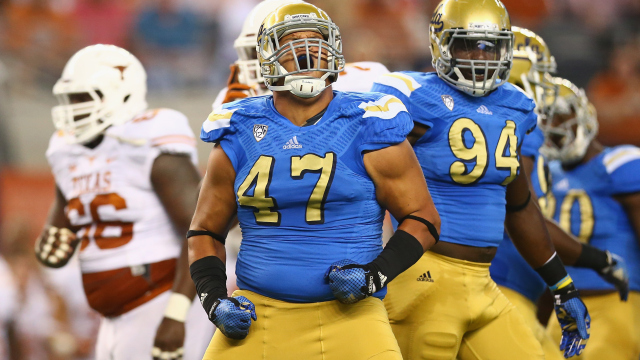 Eddie Vanderdoes celebrates a sack against Tyrone Swoopes #18 of the Texas Longhorns at AT&T Stadium on September 13, 2014 in Arlington, Texas. (Photo by Ronald Martinez/Getty Images)

Defensive lineman Eddie Vanderdoes has accepted an invitation to play in the Senior Bowl, the organization announced Monday. Vanderdoes, a fourth-year junior, is able to play in the showcase event despite leaving UCLA with a year left of eligibility.

One year removed from an ACL injury that ended his true junior season, Vanderdoes started 12 games for the Bruins in 2016. He was the target of constant double-teams and tallied 29 tackles with 1.5 sacks in his last year at UCLA.

Seven former UCLA players are expected to play in all-star games this month prior to April’s NFL draft: END_OF_DOCUMENT_TOKEN_TO_BE_REPLACED

To my Bruin family, After long discussions with my family, I’ve come to the conclusion that it is in my best interest to forgo my last year of eligibility and enter the 2017 NFL Draft. I would like to thank everyone affiliated with UCLA Athletics, the UCLA football program, and UCLA Academics for allowing me to progress where I am at today. It’s been a honor to represent this University both on and off the field. Thank you to each and everyone of my teammates and my outstanding coaching staff that has helped me and will continue to help make my dream of pursuing a NFL career possible. ONCE A BRUIN ALWAYS A BRUIN!

Redshirt junior Eddie Vanderdoes officially traded his final year of eligibility at UCLA for a chance at the NFL on Monday, announcing on social media that he would be entering the NFL Draft this spring.

Vanderdoes was honored as a senior prior to UCLA’s last home game of the season this year and was carried off the field after his final practice, as is the UCLA tradition for seniors.

In replacing Kenny Clark, who declared for the NFL Draft early last year, Vanderdoes had 29 tackles this season with 1.5 sacks while starting all 12 games for the Bruins. His 29 tackles were a career-low for him in a season, except for 2014 when he played only one game before tearing his ACL. END_OF_DOCUMENT_TOKEN_TO_BE_REPLACED

Defensive tackle Eddie Vanderdoes talks about facing USC’s offensive line and what this rivalry game means to him.

Defensive line coach Angus McClure talks about what he sees from USC’s offense on tape.

Defensive lineman Eddie Vanderdoes talks about UCLA’s 27-21 loss to WSU and the mental state of the team following back to back losses.

Linebacker Kenny Young talks about the frustrations of yet another Pac-12 loss and the need to bounce back.