UCLA gymnastics coach Valorie Kondos Field passed the 500 career win mark Saturday as the No. 4 Bruins won the Metroplex Challenge in Fort Worth, Texas with a season-high score of 197.625.

Kondos Field, who has coached the Bruins to six NCAA championships, now has 502 career victories since taking over the program in 1991.

Lee’s beam routine helped UCLA to its highest team event total this season. The Bruins scored a 49.625 on the event, which put them in first place over LSU after two rotations. Ross scored a 9.975 and Grace Glenn added a 9.9. Madison Kocian and Katelyn Ohashi each had 9.875s.

The Bruins continued to stretch their lead with each event. They pushed it to two-tenths after floor, where Ohashi led the team with a 9.925, and finished 0.26 points ahead of the second-ranked Tigers after Ross and Napulani Hall both scored at least 9.9 on vault. Ross won the event with a 9.925 while Hall tied her career high with a 9.9.

UCLA will host defending NCAA champion Oklahoma, currently ranked No. 1 in the country, on Feb. 4 at 1 p.m. 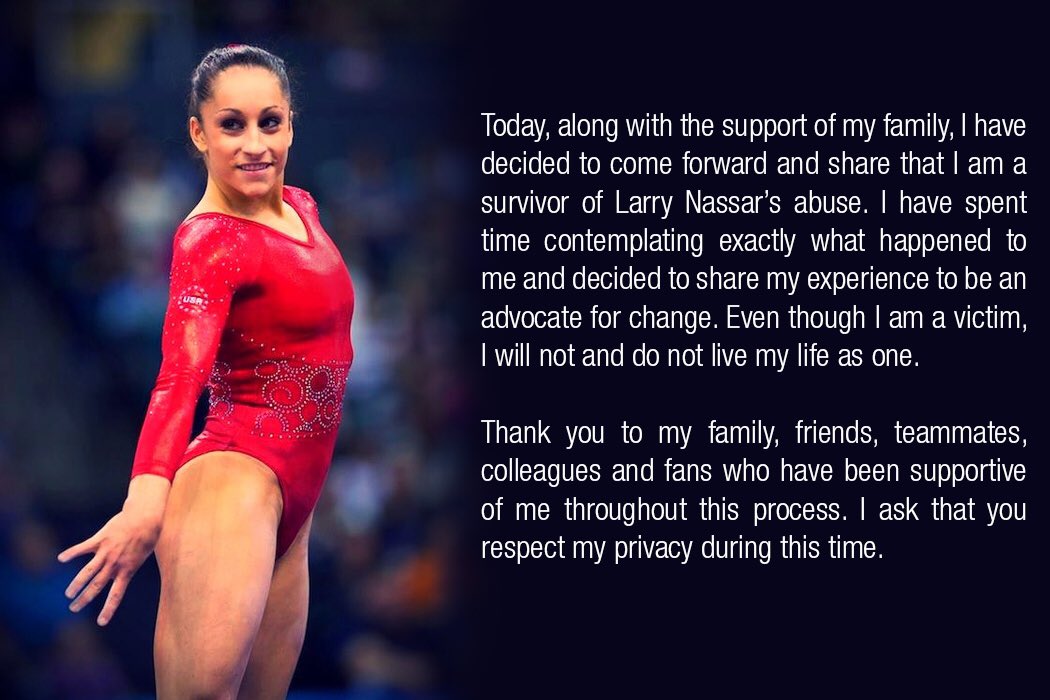 Jordyn Wieber, one of the most decorated gymnasts in U.S. history, read a victim impact statement on the fourth day of former U.S. Olympic and USA Gymnastics team physician Larry Nassar‘s sentencing hearing Friday, publicly confirming for the first time that she was a victim of Nassar’s sexual abuse.

Wieber was a member of the gold-medal-winning “Fierce Five” at the 2012 London Olympics and the 2015 World all-around champion. She is now a volunteer assistant coach with the UCLA gymnastics team and received her degree from UCLA in 2017.

“I’m angry with myself for not recognizing the abuse and that’s something I’m struggling with today. But even though I’m a victim I do not and live not live my life as one,” Wieber said in her statement.

“I’m an Olympian. Despite being abused, I worked so hard and managed to achieve my goal, but I want everyone, especially the media, to know that despite my athletic achievements I am one of over 140 women and survivors whose story is important. Our pain is all the same and our stories all important.”

More from Wieber’s testimony Friday, when she was joined by former Olympic teammate Aly Raisman

The senior’s career-high on beam led UCLA to a fourth-place finish at the NCAA Gymnastics Championships on Saturday in St. Louis. The Bruins finished with a 197.1 while Oklahoma sewed up its second straight national championship with a dominant 198.3875, which was the highest team score ever at a Super Six.

UCLA stumbled on its first event while chasing its seventh national title. Starting on their weakest event, the Bruins scored only 49.0 on vault, more than two-tenths lower than its season average and the meet’s lowest vault team score.

Led by Lee, UCLA surged on the final three events. The fifth-year senior put up one of UCLA’s three scores of 9.9 or higher on bars as UCLA scored a 49.4375. Kyla Ross, who tied for the individual NCAA title on the event Friday, led the team with a 9.95, followed by Madison Kocian‘s 9.9375 and Lee’s 9.9. The Bruins rattled off five hit routines to avoid having to count a fall on the event after Sonya Meraz missed her major release skill in the lead-off position.

Lee, a former Canadian national team member who specializes on uneven bars and beam, is known for unique skills on both events. On beam, she starts her routine with Homa flares, which are named for former UCLA gymnast Leah Homa, and is one of only a few gymnasts in the world to have ever competed the skill. While the basic requirement for all beam routines is a full, 360-degree turn, Lee ups the ante with a double turn. She lands her back handspring-back layout series on the four-inch beam on two feet instead of the more common walk-out technique. The perfect score at nationals was a long-awaited reward for her showmanship and risk-taking, Kondos Field said.

“All I was focusing was not even doing a perfect routine, just go out there, have fun, inspire my teammates,” Lee told Pac-12 Networks. “I told them I did it for them right after the routine. It was all for them.”

Kocian and senior Hallie Mossett scored matching 9.9125s on floor as the team scored 49.3375 on its final event.

UCLA’s fourth-place finish is its highest since 2013 when it took fourth at the championship meet hosted at Pauley Pavilion.

The freshman added the collegiate titles to her already impressive gymnastics resume that includes team gold medals in the 2012 Olympics and the 2014 world championships. She will try to add another championship Saturday with the Bruins as UCLA qualified for the national finals with a second-place finish in its semifinal.

“I just woke up and really wanted to have fun this last competition,” Ross told Pac-12 Networks after the meet. “To come out and start so strong on bars, I just felt the energy right away and carried it throughout the whole meet.”

UCLA opened its meet on bars and Ross’ 9.95 score survived the entire day to finish in a six-way tie for the national title. She kept the momentum going on beam with a 9.9625 that secured UCLA’s NCAA three-peat on the event, following Samantha Peszek in 2015 and Danusia Francis in 2016.

The competition starts at 6 p.m. PT on ESPNU.

The UCLA gymnastics team notched the highest score in the country on Saturday in a convincing win 198.125-194.175 win over Stanford.

The No. 5 Bruins bested No. 1 Oklahoma’s previous national high of 198.025 with their best bars rotation since 2005. Madison Kocian and Peng-Peng Lee both scored perfect 10s as UCLA tallied a team bars total of 49.725, which is tied for third-best in program history.

Oklahoma is the only other team in the country to break the 198-point mark this season. The Bruins have a big Pac-12 meet next week against No. 4 Utah in Salt Lake City.