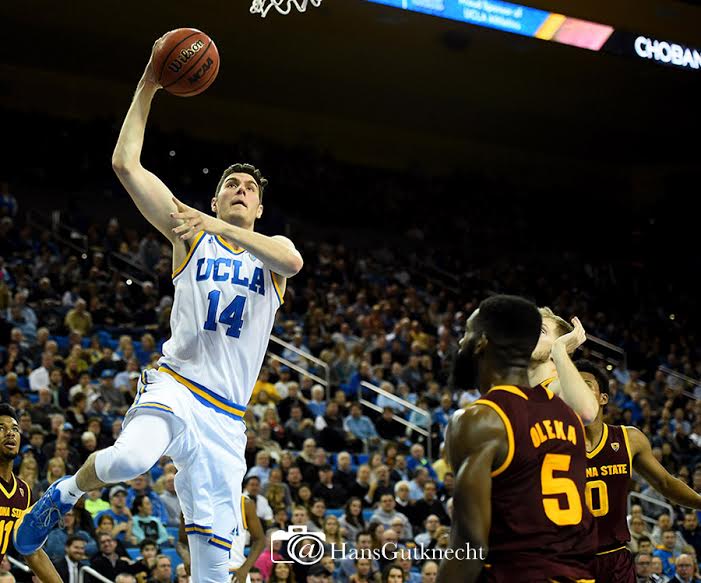 GG Goloman has the size and athleticism to make an impact, but the junior is running out of time to realize his potential. (Hans Gutknecht/SCNG)

Strengths: At 6-foot-11 with plenty of athleticism, Goloman has the ability to be a dynamic player. Averages of 3.7 points and 2.4 rebounds in 11.5 minutes didn’t turn any heads, but when he was aggressive, the junior from Hungary achieved respectable success. Even when he was on the court, there wasn’t an abundance of opportunity as the fourth option in UCLA’s frontcourt rotation. Goloman was at his best going to the basket and his ability to run the floor fit the Bruins’ up-tempo style.

Weaknesses: UCLA coach Steve Alford insisted all season Goloman was a good outside shooter who just lacked opportunity. The numbers said otherwise. He shot an impressive 58 percent from the field, but made just 1 of his 10 attempts from 3-point range and shot just 33 percent on 2-point jumpers.

Best moment: Goloman was perhaps his most aggressive this season when UCLA most desperately needed it. END_OF_DOCUMENT_TOKEN_TO_BE_REPLACED

UCLA hasn’t solved all its defensive woes, but Wednesday night was a step in the right direction.

The Bruins broke through at Oregon State, earning an 82-73 victory that marked their first conference road win of the season. They did so by holding the Beavers to under 40 percent shooting for much of the game, and trailing for just 74 seconds at Gill Coliseum.

The win moved Steve Alford to 8-13 in Pac-12 road games. The third-year coach is still looking for his first conference sweep away from Pauley Pavilion — something that could happen as soon as Saturday at Oregon.

“I think it’s been all over everywhere that we’re giving up 86 points per game in Pac-12 play,” Alford said. “They know that. It’s starting to affect them a little bit and hurt them. And that’s good.”

Junior Isaac Hamilton led UCLA (12-7, 3-3) with 25 points in one of his most efficient outings of the season. The 6-foot-4 guard made 10 of his 14 shots from the floor, including half of his six attempts from beyond the arc. After an inconsistent sophomore season, the former five-star recruit has blossomed into the Bruins’ most consistent offensive threat, scoring in double figures in 15 straight games. Against Pac-12 opponents, he is averaging 19.5 points on 48.9 percent shooting. END_OF_DOCUMENT_TOKEN_TO_BE_REPLACED

UCLA’s Gyorgy Goloman has barely played as a sophomore, having lost the first half of the season to a leg injury. According to Steve Alford, the 6-foot-11 forward will be shouldering a much heavier workload moving forward — starting with tonight’s 8 p.m. tipoff at Oregon State.

Goloman had been diagnosed with a stress fracture in his right leg back in October, and his recovery took longer than the team had initially expected. He was only cleared for six to eight minutes in his season debut against USC last week, and ended up seeing the floor for two minutes in what turned out to be an 89-75 loss at Pauley Pavilion.

ANALYSIS: Why have the Bruins struggled so much on defense?

While he may not contribute big numbers — having averaged just 1.3 points and 1.5 rebounds in 10.8 minutes off the bench last year — his presence gives the Bruins more lineup flexibility, with the length to position himself at the top of the team’s zone defense.

“He’s got the basketball IQ,” Alford said of Goloman. “He understands positioning. I’m hoping that helps, because we’re struggling with the understanding of positioning, being in the right position, and doing it consistently enough.

“We’ll get a stop or two, and then we’ll have three times where they score. … Those things just can’t happen. You’ve got to have the demeanor of a team where, if someone scores two times in a row on you, stop it.”

UCLA reserve forward Gyorgy Goloman is probable to play vs USC. Been out all season with stress fracture in his leg. pic.twitter.com/7LR6PhsAcH

UCLA forward Gyorgy Goloman could make his season debut against USC tonight. The reserve forward has been ruled probable for the 8 p.m. tipoff at Pauley Pavilion, and was warming up with the team before the game.

Goloman was diagnosed with a stress fracture in his right leg back in mid-October, an injury that sidelined him through the Bruins’ first 17 games. A valuable reserve late in his freshman campaign, the Hungary native averaged 1.3 points and 1.5 rebounds a year ago — totaling 12 points and 14 rebounds during one four-game stretch.

The best performance of his career came against the Trojans in the Pac-12 Tournament. He played 28 minutes in a blowout win, recording six points, seven rebounds and three assists.

“We need him,” head coach Steve Alford said last week. “We need the experience. We need the length up front. He would definitely help us defensively, where we’re not very good right now. That’s where we’ve really got to show the most growth. He would help us in that.”

UPDATE: Goloman made his season debut with 9:24 left in the first half and UCLA trailing 26-17 after four-minute scoring drought.

UCLA forward Gyorgy Goloman has been sidelined all season with a stress fracture in his leg, and his return date remains unclear.

Asked if the Bruins would consider a redshirt year, head coach Steve Alford said he and the sophomore have yet to discuss the possibility. Goloman returned to practice on Tuesday afternoon in a limited capacity.

“If he feels like that’s best for him, as a coach, I always listen to that,” Alford said. “It’s definitely a player’s decision.”

The third-year coach also emphasized how much UCLA could benefit from Goloman’s presence in the lineup. The 6-foot-11 forward only averaged 1.3 points and 1.5 rebounds off the bench as a sophomore, but began shouldering a heavier load in conference play. He played a career-high 28 minutes against USC in the 2015 Pac-12 Tournament, recording six points, seven rebounds and three assists.

The Bruins are coming off their second straight 0-2 start in conference play, falling at both Washington and Washington State.

“We need him,” Alford said. “We need the experience. We need the length up front. He would definitely help us defensively, where we’re not very good right now. That’s where we’ve really got to show the most growth. He would help us in that.”