— False starts continue to be a problem under the new snap counts, and Mora attributed it to “a lack of concentration.” The head coach noted that the problem generally improves as practice goes on, so he would like to see better concentration at the start of the session. Offensive lineman Kenny Lacy was probably the most penalized player on Saturday and spent a large amount of time running laps for false starting. END_OF_DOCUMENT_TOKEN_TO_BE_REPLACED

UCLA defensive back Ishmael Adams was charged with misdemeanor battery on Monday, according to the Los Angeles city attorney’s office.

He is scheduled to be arraigned on Nov. 16.

The redshirt junior had been suspended for the first three games of the season following his arrest on Aug. 30 on suspicion of robbery. He allegedly used force to steal a cell phone from an Uber driver.

“We feel as a program that he’s missed a quarter of his season,” Mora said then. “He’s shown remorse for the actions that he’s taken. He’s accepted responsibility. He’s accepted the consequences. He’s apologized profusely to his team, his teammates, this staff, and he’s come back with a great attitude.

“So we’re going to move forward that way. If things change, we’ll adjust.”

Adams had started 26 straight games for the Bruins until his suspension. He has recorded eight tackles, two pass breakups and an interception since his return.

UPDATE: Jim Mora said on Tuesday that Ishmael Adams’ status with the team has not changed.

UCLA has regained one defensive back but lost another.

Head coach Jim Mora reinstated Ishmael Adams on Tuesday, ending a suspension that followed the redshirt junior’s arrest late last month. Adams had been arrested on suspicion of robbery on Aug. 30, but the Los Angeles District Attorney’s office referred his case to the city attorney on Monday — ending the possibility of him facing felony charges.

The city attorney’s office may still elect to pursue misdemeanor charges. Adams had started 26 straight games for the Bruins until sitting out the first three games this season, and was an All-Pac-12 first-team selection in 2014.

“We feel as a program that he’s missed a quarter of his season,” Mora said. “He’s shown remorse for the actions that he’s taken. He’s accepted responsibility. He’s accepted the consequences. He’s apologized profusely to his team, his teammates, this staff, and he’s come back with a great attitude.

“So we’re going to move forward that way. If things change, we’ll adjust.”

Mora also announced that senior cornerback Fabian Moreau will miss the rest of the season with a Lisfranc injury — a foot fracture that can sometimes lead to chronic pain if an athlete rushes back into action. He is expected to apply for a hardship waiver and regain his final season of eligibility.

Moreau sat out most of the second half of UCLA’s win over BYU on Saturday, but reentered the game during the final series. 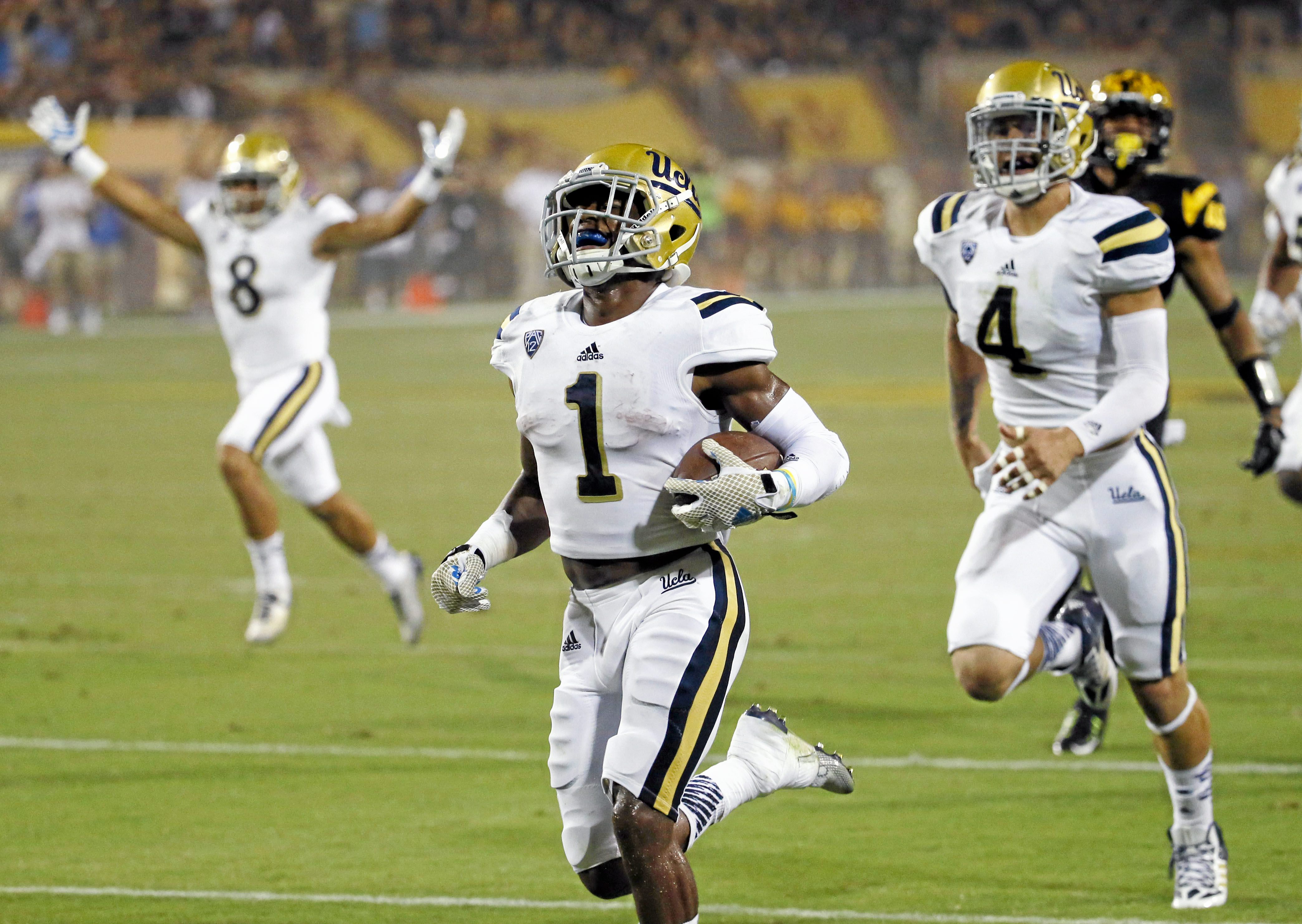 UCLA defensive back Ishmael Adams (1) won’t face felony charges after being arrested on suspicion of robbery in August. He has yet to play this season due to an indefinite suspension. (AP Photo/Matt York)

The Los Angeles District Attorney’s office has referred the case to the city attorney, which could elect to file misdemeanor charges against the redshirt junior. NBC News first reported the development.

The Los Angeles City Attorney’s office had not received the case as of Monday afternoon. Adams is no longer scheduled to appear in court on Tuesday morning.

Adams has been suspended indefinitely since being taken into custody by the UCLA police department at 3:36 a.m. on August 30. He allegedly tried to steal a cell phone from an Uber drive.

Head coach Jim Mora announced the decision on Tuesday afternoon, several hours after Adams posted $100,000 bail and was released from jail. The redshirt junior will not play in the Bruins’ season opener against Virginia on Saturday, and does not have his first court date until Sept. 22.

Mora said that he and his staff emphasize that players have a responsibility “to represent the highest ideals and moral values,” and that their position on the team puts them under greater scrutiny. END_OF_DOCUMENT_TOKEN_TO_BE_REPLACED