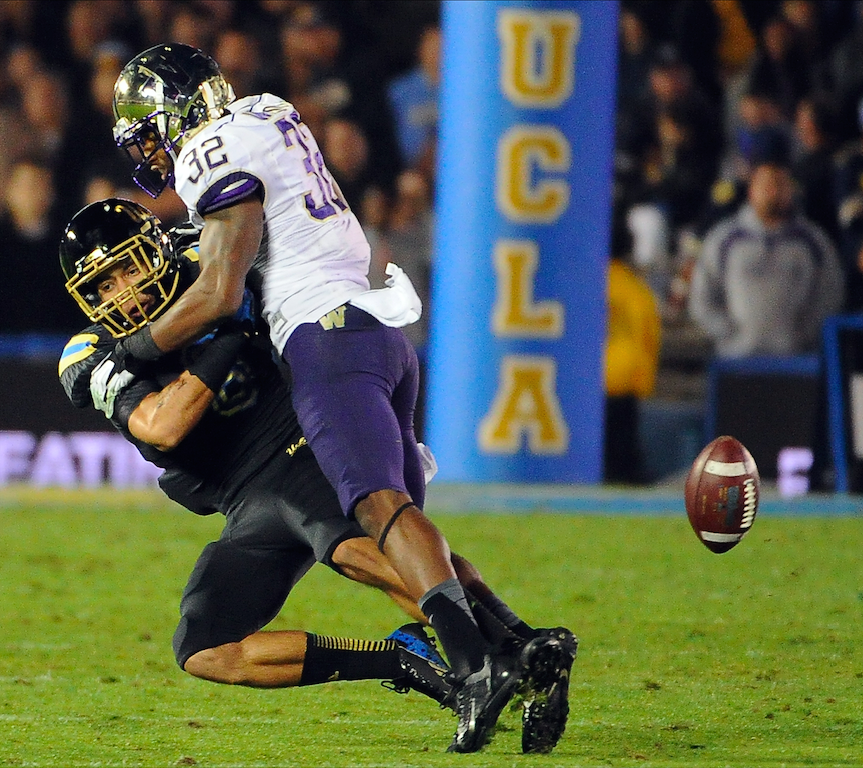 Washington Huskies defensive back Tre Watson (32) knocks away pass intended for wide receiver Jalen Ortiz (8) during the the Bruins’ 41-31 win at the Rose Bowl on Nov. 15, 2013. Ortiz switched to cornerback the following season. (Keith Birmingham/Staff)

Cornerback Jalen Ortiz has decided to transfer out of UCLA, ending his Bruin career after limited action through two seasons.

The 5-foot-9, 182-pound Phoenix-area native arrived in Los Angeles as a receiver, but switched to the defensive backfield as a sophomore. A former three-star recruit, Ortiz announced his decision Tuesday on Twitter.

“After long consideration and many talks with my family I have decided to transfer from UCLA,” he wrote. “These past two years here have been two of the best of my life, and I have so many people for that including Coach (Jim) Mora and his staff for giving me the opportunity to play at such a prestigious university.”

There was one that arced high and back, landing some 60 yards away. Another swung short and hooked left. He’s still a freshman, after all.

Ranked one of the top punters in the country, the St. Petersburg, Fla., native was the first member of the 2013 class to fax in his signed letter of intent on Feb. 6. He has the unenviable task of following Jeff Locke, one of the best punters in UCLA history and a recent fifth-round draft pick.

Locke may be the most difficult player to replace for the Bruins, who are trying to better a 9-5 record amidst higher expectations and a tougher schedule. That Covington worked with Locke earlier this summer is a good start. The freshman said the two, roughly 90-minute sessions at UCLA were very productive. For one, they share a dominant foot.

“You don’t see many lefties,” Covington said. “That was a lot, just seeing his form and his steps and just how he drops. You can critique what you do and what you’re not doing, what you need to work on.”

Covington acknowledged the pressure in following a two-time Ray Guy semifinalist and fifth-round draft pick, but said it won’t faze him. Still, there’s a long way for him to go before he can fill Locke’s shoes.

“I think the key with Sean is his operation time,” head coach Jim Mora said. “When you go from Jeff (Locke) and Kevin McDermott, the snapper, they were so efficient from snap to kick. … With Sean, it’s just that operation. That’s so critical. But he has an excellent leg.”

“I don’t know if he’ll be the Jeff Locke that we saw that could pin teams down inside the 10-yard line on a pretty consistent basis. That’s kind of an art.”

» Priest Willis has played cornerback so far in San Bernardino, backing up his status as a top-100 recruit. During his recruitment, however, some thought the 6-foot-2 Arizona native would be better off at safety.

Asked if he was glad Willis fit at corner, Mora began dropping his own credentials.

“I’ve coached defensive backs my whole career,” he said. “I’ve been lucky to been around some — Rod Woodson, he’s a pretty good corner. All-Century player. So I would think that people would trust my judgment when it comes to defensive backs. END_OF_DOCUMENT_TOKEN_TO_BE_REPLACED