UCLA might be a week or so away from finally naming its starting quarterback.

“I would like to be able to make that decision next weekend at the latest,” head coach Jim Mora said Friday, after the Bruins’ final practice of training camp at Cal State San Bernardino.

The evening session consisted of a live scrimmage in which true freshman Josh Rosen and redshirt junior Jerry Neuheisel switched turns with the first-team offense. Former walk-on Mike Fafaul took most of the second-team reps.

Mora said that the scrimmage is only part of the overall picture, especially since the quarterbacks weren’t taking contact. However, he said the team would ideally need to know the identity of its starter before it starts game week prep for its Sept. 5 opener against Virginia.

“We are no closer,” head coach Jim Mora said Tuesday evening. “There’s nothing on the horizon in regards to a quarterback decision. I’m waiting to see somebody win the job. And nobody’s won it yet.”

More than halfway through preseason training camp, the Bruins have continued to rotate true freshman Josh Rosen and redshirt juniors Jerry Neuheisel and Mike Fafaul — declining to cut it down to even a two-man competition.

According to Mora, the quarterbacks are being constantly graded on various factors 24 hours a day. He would not say who was currently grading ahead, but insisted that the competition remains very close. END_OF_DOCUMENT_TOKEN_TO_BE_REPLACED

» At Pac-12 Media Days last month, Jim Mora said he wanted to find a starting quarterback “sooner rather than later.” At the start of training camp this week, he said UCLA would reevaluate the position after five or six practices.

But now, six days and seven practices later, the Bruins’ three-headed rotation is still going strong. During Saturday night’s full-pads session, it was Mike Fafaul who got the bulk of the first-team reps, with some also going to Jerry Neuheisel. Josh Rosen worked with the ones sparingly, but threw a pair of touchdowns.

Asked if at least one could be cut from the race by Monday, quarterbacks coach Taylor Mazzone held to the status quo.

“All three are doing a great job,” Mazzone said. “They’re having a great camp. I think right now, for the past seven practices, right now we still need to see more from all three of them. … We’re going to keep grinding those guys out, see what they can do.”

Mazzone did allow that if he gets a “gut feeling” about a player, then it would be appropriate to give him a larger share of the reps.

But asked if he had such feelings, he said: “I couldn’t tell you that right now.”

» Myles Jack worked a little bit at returner today, but was held out of essentially the entire second half of practice. END_OF_DOCUMENT_TOKEN_TO_BE_REPLACED

“I think he’s pushing to get better and he has a good grasp of the day,” head coach Jim Mora said. END_OF_DOCUMENT_TOKEN_TO_BE_REPLACED 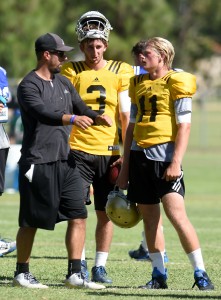 » UCLA still technically has three quarterbacks competing to start, but after three days, it’s clear that Jerry Neuheisel and Josh Rosen are sharing the bulk of meaningful reps. Even when other Bruins have been asked about the race, they’ve usually discussed it purely as a Neuheisel vs. Rosen situation.

Mike Fafaul, who earned a scholarship this summer, got most of his action in seven-on-sevens today.

Neuheisel had his best day yet in training camp, and looks as if he’s taken a couple of steps forward since a relatively uninspiring spring. However, it’s going to take a lot to surpass both what Rosen has shown in practices and the higher ceiling he presents — even if Neuheisel is the one with meaningful game experience.

» A few notes on running backs. Nate Starks looks a bit more explosive than he did even in spring, and is now breaking off long runs at least once per practice.

So far, Bolu Olorunfunmi looks like a guy that could figure into the backfield rotation, though that may not be necessary given the existing depth at tailback. He won’t blow anyone away with highlights right now, but he has enough speed and can lower his shoulder into a defender or two. END_OF_DOCUMENT_TOKEN_TO_BE_REPLACED