This is a guest blog post by freelance writer Michael Ellis detailing the 1964 UCLA basketball team, the program’s first to win a national championship. 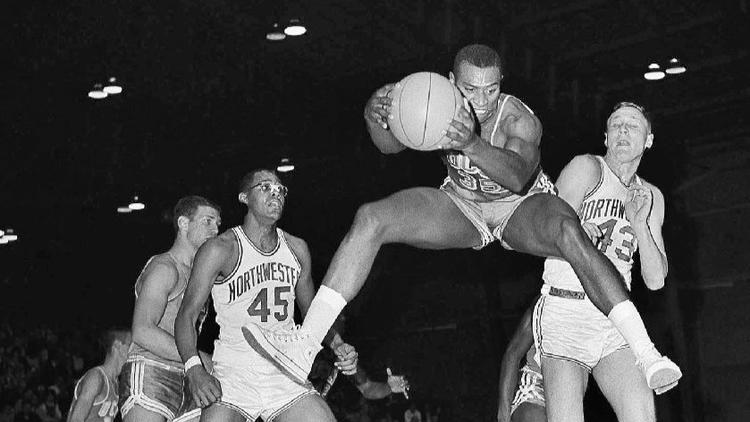 UCLA’s Fred Slaughter, a member of the program’s first national championship team in 1964, grabs a rebound during a game against Northwestern in 1962.

By Michael Ellis
The photograph, taken in 1962, shows Fred Slaughter grabbing a rebound with the same determination that a falcon seizes its prey. So when Slaughter, the center on John Wooden’s first championship team, died recently, I felt a special loss. But paradoxically, for many of us, Coach remains a guardian of the future.

At 6 feet 5 inches, Slaughter, at center, was one of the two tallest starters on the 1964 team. The other was forward Keith Erickson. Walt Hazzard and Gail Goodrich were the guards; Jack Hirsch and Erickson were the forwards. Two other players, Kenny Washington and Doug McIntosh, provided vital support off the bench, and the hopes of UCLA rode on the shoulders of seven young men. (The other players were Chuck Darrow, Kim Stewart, Mike Huggins, Vaughn Hoffman, Rich Levin, Kent Graham and Steve Brucker.)

They weren’t inseparable off the court, but they were spokes on the same wheel while on it. The two-two-one zone press, devised by assistant coach Jerry Norman, depended on trust and accountability. Goodrich and Slaughter were the first defenders; Hazzard and Hirsch were next; and Erickson was the safety.

Talking to Sports Illustrated’s Alexander Wolff in 2007, Norman said, “The idea wasn’t to steal the ball….It was to increase tempo.”

Forrest Twogood, Southern Cal’s coach, put it differently: “Have you ever been locked up in a casket for six days? That’s how it feels.”

Most basketball teams play half their games at home; the 1964 team didn’t. “For home games that season,” Wolff wrote, “the Bruins bused to the L.A. Sports Arena, which was virtually on the USC campus; the Long Beach Arena, 25 miles away; and even the gym at a community college in Santa Monica. The Bruins would essentially play 30 road games.”

Fifty-two years later, three voices — those of Wooden, Hazzard and Slaughter — can no longer speak. While all seven players took different paths after leaving UCLA, they were all, to quote Wooden, “the best that they could be” in that magical year, a time when the Athletic Department shared a commitment to excellence and believed the circle should remain unbroken.

Fred Slaughter: After earning a degree in business administration and an MBA at UCLA, Slaughter, a high school star in Topeka, Kan., (as a sprinter in track and a basketball player), graduated from Columbia University’s Law School. He later became one of the most successful sports agents of his time. END_OF_DOCUMENT_TOKEN_TO_BE_REPLACED

For the second time in as many meetings with the media prior to the season, UCLA basketball coach Steve Alford was asked about the public letter he wrote following last season, an apology for the fourth losing campaign at UCLA since John Wooden retired 41 years ago.

In his response on Friday at Pac-12 media day in San Francisco, Alford referenced Wooden himself, citing the expectations at UCLA created by a man whose accomplishments are unmatched by any coach in the history of college basketball.

“Coach Wooden raised the bar at UCLA,” Alford said. “That bar was raised a long time ago in Westwood by a guy that won a bucket-load of games and a lot of championships and established something that, quite honestly, hasn’t been established anywhere else in the country. So when that bar is that way, there’s expectations. When you don’t meet or come close to those expectations, we talk to our players all the time, there are going to be consequences.”

Alford made clear the consequences to which he referred included his voluntary return of a one-year contract extension through 2020-21, information in the letter he penned after losing the final five games of last season to finish 15-17. END_OF_DOCUMENT_TOKEN_TO_BE_REPLACED 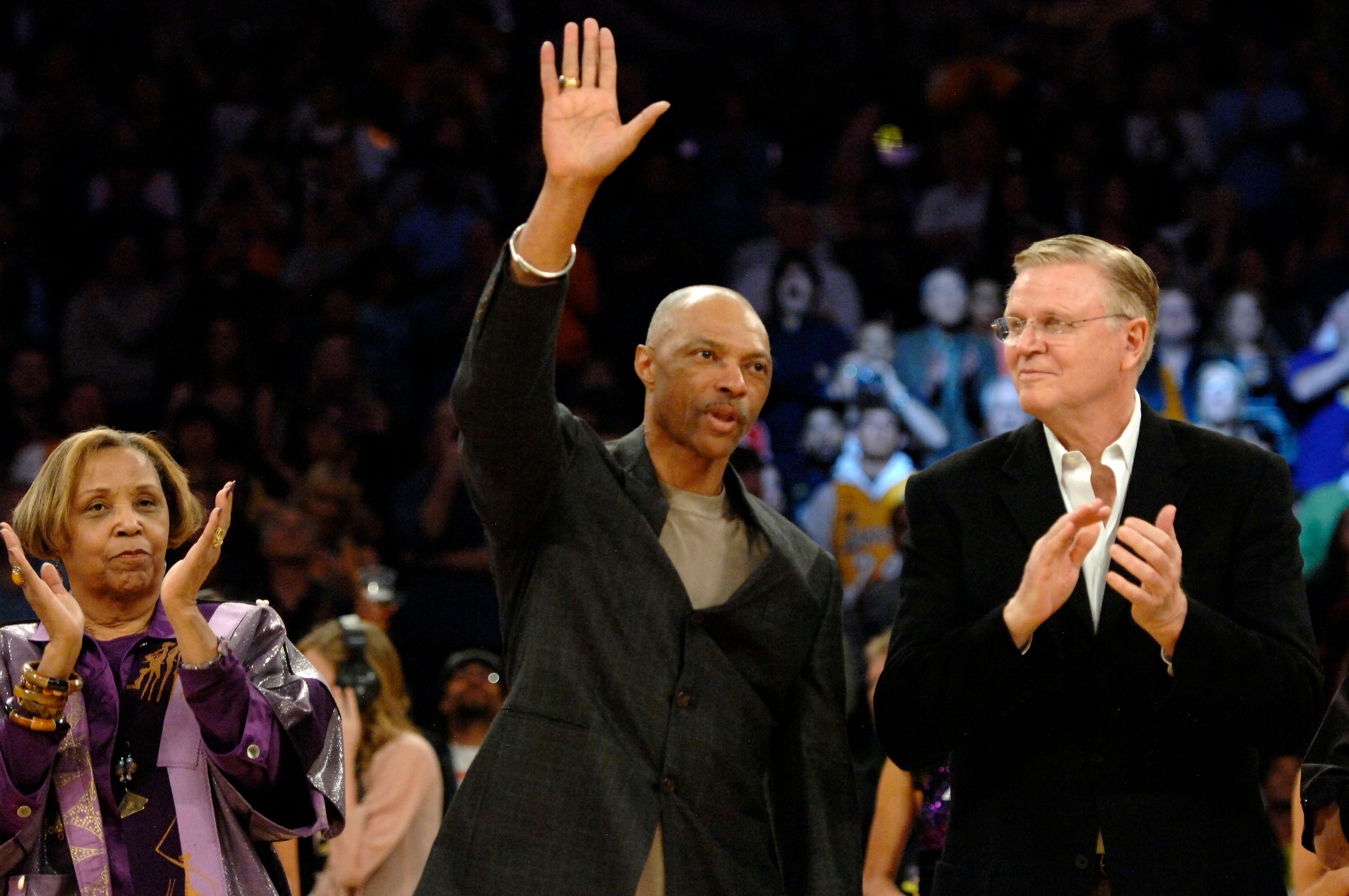 Keith Erickson (right) stands next to Jim Cleamons as part of a 40th anniversary ceremony for the 1972 Lakers championship team. Erickson also helped UCLA to national titles in 1964 and 1965, and will be inducted into the Pac-12 Hall of Honor this March. (Michael Owen Baker/Staff Archives)

Former UCLA star Keith Erickson will be among the 12 players inducted into this year’s Pac-12 Men’s Basketball Hall of Honor.

The 71-year-old was part of the Bruins’ first two NCAA championship teams in 1964 and 1965, and also earned a spot on U.S. men’s volleyball team that finished ninth at the 1964 Summer Olympics in Tokyo. Drafted in the third round of the 1965 NBA draft, the El Segundo native embarked on a 12-year career that included a 1972 title run with the Lakers.

Erickson will be inducted to the Hall of Honor on March 12, before the Pac-12 Tournament championship game at the MGM Grand Garden Arena.

The NCAA tournament’s round of 64 officially starts today, so hopefully you all filled out your brackets for a chance at Warren Buffett’s $1 billion. UCLA doesn’t tip off until Friday at around 7 p.m., but in the meantime, here’s a roundup of some of the coverage so far in this week’s Daily News:

— The Woodens are working to make sure their family legacy lives on.
— Danny Manning and Steve Alford’s careers have a few curious parallels.
— Tyus Edney reflects on UCLA’s 1994 loss to Tulsa, a game he ranks as the most disappointing of his college career.

— Bronzell Miller might be dead by the time you read this. The former Utah linebacker is battling multiple myeloma, a cancer of the plasma cells, and may only have a week left to live.

— Bellevue standout and UCLA recruiting target Budda Baker is still waiting for the release of his brother Robert, imprisoned for first-degree robbery and possession of a firearm.

— How did Tad Boyle turn Colorado into a contender?