» After falling in the Sweet 16, Utah will get another shot at Duke this December at Madison Square Garden.

» Theo Robertson, who was a part of Cal’s conference title team in 2010, is now a video intern for the Golden State Warriors.

» Former UCLA running back Johnathan Franklin now works in the Notre Dame athletic department. He talked to the Milwaukee Journal-Sentinel about adjusting to life after football. END_OF_DOCUMENT_TOKEN_TO_BE_REPLACED 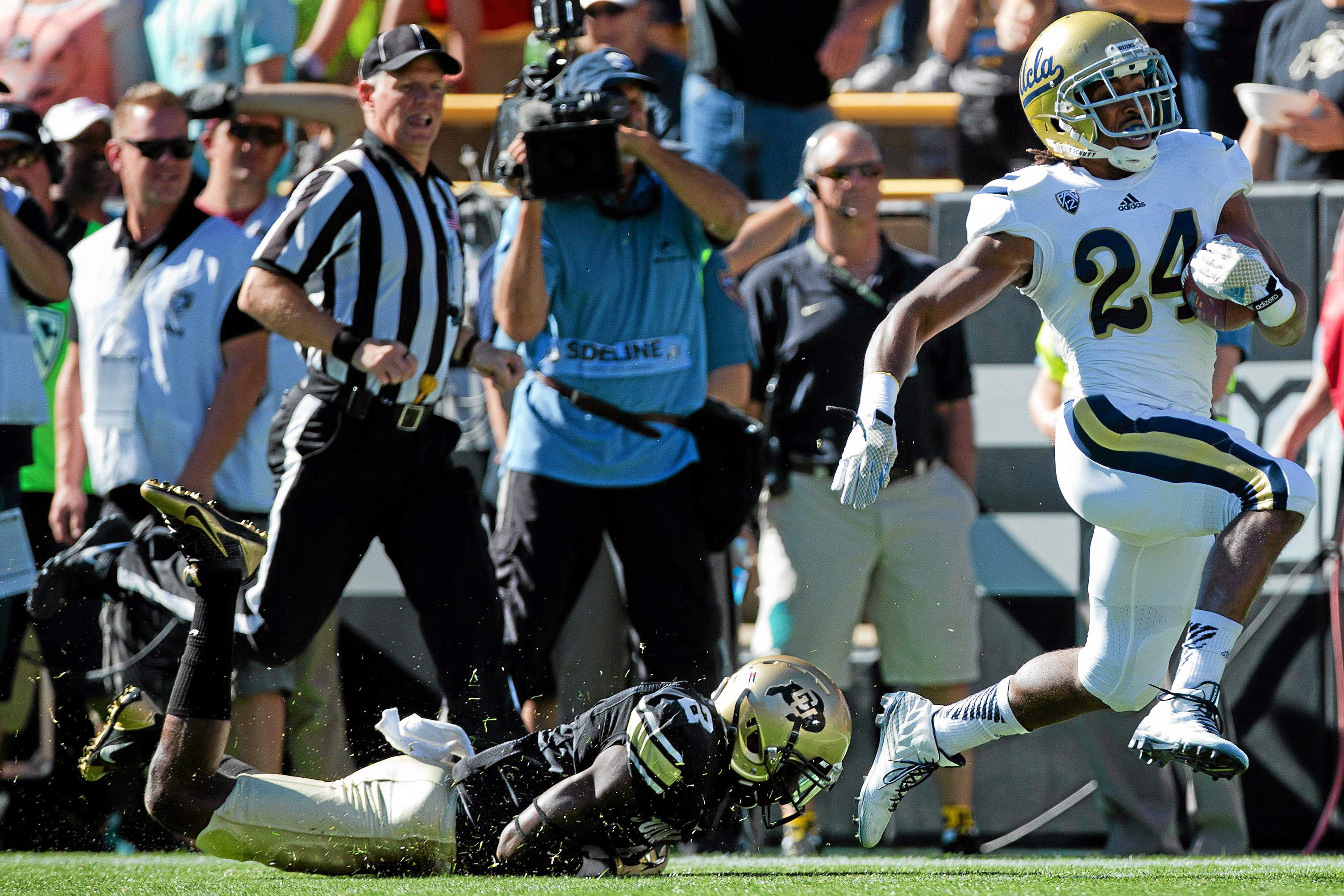 Paul Perkins runs past cornerback Kenneth Crawley for a 92-yard touchdown in the first quarter of UCLA’s 40-37 win at Colorado on Oct. 25. (Getty Images)

Paul Perkins might not be the flashiest running back around, but the redshirt sophomore is just four yards away from becoming UCLA’s 13th 1,000-yard rusher.

He’ll likely hit that mark on his very first carry at the Rose Bowl this Saturday. The last two Bruins to reach the milestone were all-time leading rusher Johnathan Franklin (in both 2012 and 2010) and Chris Markey (2006).

Perkins is currently second in the Pac-12 with 124.5 yards per game, which puts him on pace to rush for 1,618 yards through the regular season plus a bowl game. That would be the second-best single-season mark in school history, behind Franklin’s 1,734.

» In a conference filled with newcomers, Oregon State coach Mike Riley is heading into his 14th season in the Pac-12. “Mike’s kind of a godfather,” said Stanford’s David Shaw.

» Apparently no longer content with uniform experimentation, Oregon will debut scratch-and-sniff season tickets this year. Unfortunately, the sticker is a Carl’s Jr. ad and likely smells like burgers rather than ducks.

» A former ASU running back was found shot to death on a hiking trial near Sedona. END_OF_DOCUMENT_TOKEN_TO_BE_REPLACED

At 24 years old, Johnathan Franklin’s career is already over.

UCLA’s all-time leading rusher will retire from the NFL after just one season, his career ended by a neck injury that sidelined him in Week 12 last year. The 5-foot-11 back was drafted in the fourth round in 2013 — lower than both he and many analysts expected — but was nonetheless overjoyed to head to the Green Bay Packers.

However, Franklin only carried the ball 19 times for a touchdown and 107 yards — 103 of which came in a Sept. 22 loss to the Cincinnati Bengals. END_OF_DOCUMENT_TOKEN_TO_BE_REPLACED

After watching Johnathan Franklin smash multiple school records last season, UCLA will need multiple bodies to fill the void at running back. No single set of feet can hope to match what Franklin did as an All-American and Doak Walker runner-up, rushing for 1,734 yards and 13 touchdowns.

The Bruins’ coaching staff has long said that the team will rely on a committee approach; if Franklin was “The Mayor,” then 2013 will be led by a city council. The test in San Bernardino will be to see if anyone has the potential to eventually emerge as a true No. 1 back.

Key returners: As a backup last season, Jordon James carried the ball 61 times for 215 yards — good for a pedestrian average of 3.5 yards per carry. Contrast that with Franklin’s 6.1 ypc, and his chances of becoming a star seem unlikely. The 5-foot-9, 193-pound junior flashes impressive runs in practice, but still hasn’t found a way to translate that into games. END_OF_DOCUMENT_TOKEN_TO_BE_REPLACED