The NBA Combine will hold its on-court portions to end this week, with five-on-five competition returning for the first time since 2008.

Former UCLA guard Norman Powell is slated to participate, part of a nine-man squad that also includes Kentucky’s Andrew Harrison, Arizona’s T.J. McConnell, and Stanford’s Chasson Randle. They will take the floor at 1:30 p.m. PT on both Thursday and Friday.

In the meantime, there are full body measurements from 63 players to pore over. Both Powell and forward Kevon Looney stood out in one particular category: their wingspans.

A potential lottery pick after his lone season at UCLA, Looney spread his arms out to 7’3.5″, tying him for sixth at the combine with Kansas’ Cliff Alexander. The downside is that he also tied for the eighth-highest body fat percentage at 11.9 percent. It’s a surprising number given how lanky he looked as a college player, and helps explain why he appeared winded at the end of the season despite being listed at 6-foot-9, 220 pounds. END_OF_DOCUMENT_TOKEN_TO_BE_REPLACED 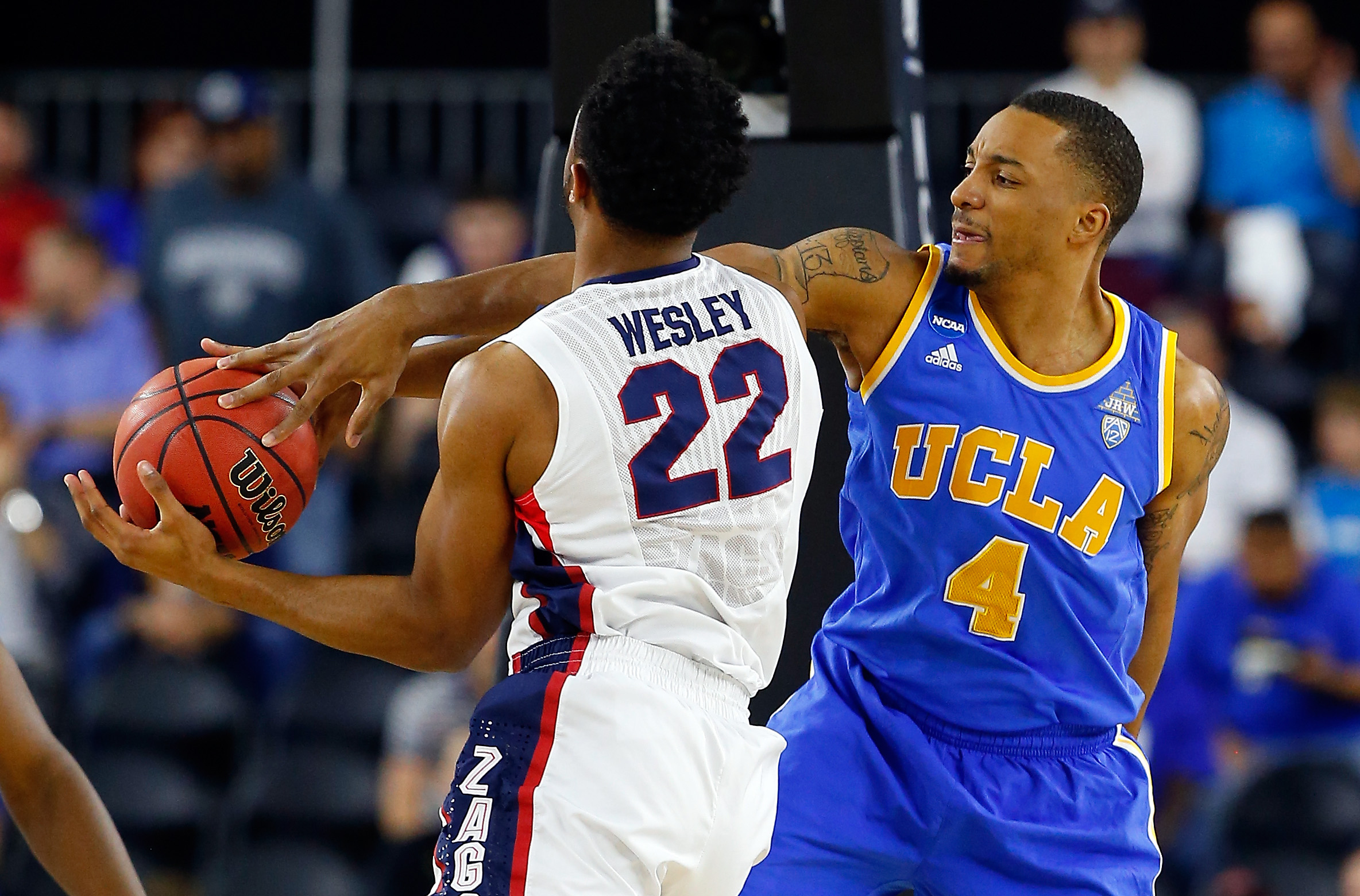 Kevon Looney has officially declared for the NBA draft, becoming the third player in the last three years to leave UCLA after his freshman season.

A five-star recruit out of Milwaukee, the 6-foot-9 forward averaged 11.6 points and 9.2 rebounds and made the All-Pac-12 second team. He sustained a facial fracture during the Pac-12 Tournament, but continued playing with a mask during the Bruins’ Sweet 16 run.

He is projected by many NBA mock drafts as a potential lottery pick.

“This was a really tough decision for me because there were so many positives both ways,” Looney said in a statement. “My time at UCLA has been unbelievable, and I know I’ll be a Bruin forever. But playing in the NBA is a dream I’ve had for so long, and this feels like the right time to pursue that dream and make the transition to the next level. END_OF_DOCUMENT_TOKEN_TO_BE_REPLACED

UPDATE: Kevon Looney is close to choosing his representation, according to RealGM, and has plans to declare for the NBA draft.

Kevon Looney has not yet announced whether or not he will leave UCLA and declare for the NBA draft, but head coach Steve Alford doesn’t think the wait will last much longer.

“I think it’ll probably be a quicker decision versus something that’s going to be drawn out,” Alford said.

Although the 6-foot-9 freshman forward left the door open for a return to school last week, it’s difficult to imagine him turning down a chance to become a lottery pick this June. END_OF_DOCUMENT_TOKEN_TO_BE_REPLACED

UCLA’s basketball offseason is nearly three days old. Before the post-hoops period of 2015 continues, Steve Alford is scheduled to speak to the media again on Tuesday afternoon.

Before then, here’s a couple of pieces from Sunday’s paper for anyone that missed them:
— My season recap on UCLA basketball, whose long-term future is still a bit unclear despite a Sweet 16 run.
— Columnist Tom Hoffarth talks to longtime UCLA announcer Chris Roberts about his retirement, and names a few of the candidates vying to replace him.

1. UCLA’s going to back-to-back Sweet 16s doesn’t necessarily mean you should expect a third. The Bruins could certainly be better next season. They will have more depth in the backcourt, though losing freshman Kevon Looney would be a tremendous blow to the frontcourt. Gyorgy Goloman looks like a nice under-the-radar find, but I think he and center Thomas Welsh will pay bigger dividends as juniors rather than sophomores. Introducing former four-star recruit Jonah Bolden will help significantly; he spent his ineligible season transitioning from the four to the three, and I wouldn’t be surprised if he starts immediately.

But it is unreasonable to expect the type of good fortune that has followed UCLA these past two postseasons. The Bruins deserve credit for taking advantage of their opportunities, but drawing a double-digit seed twice in the round of 32 is as friendly a path as any team could hope to see. At least Stephen F. Austin was a team that was good enough to return to the NCAA Tournament this season; I’m not sure the same can be said for UAB, which was likely one of the 10 weakest teams in the whole field.

Let’s hazard a guess and say that the Bruins draw a No. 5- or 6-seed in next year’s NCAA Tournament. Will they be able to knock off a fourth- or third-seeded team to end the weekend? END_OF_DOCUMENT_TOKEN_TO_BE_REPLACED