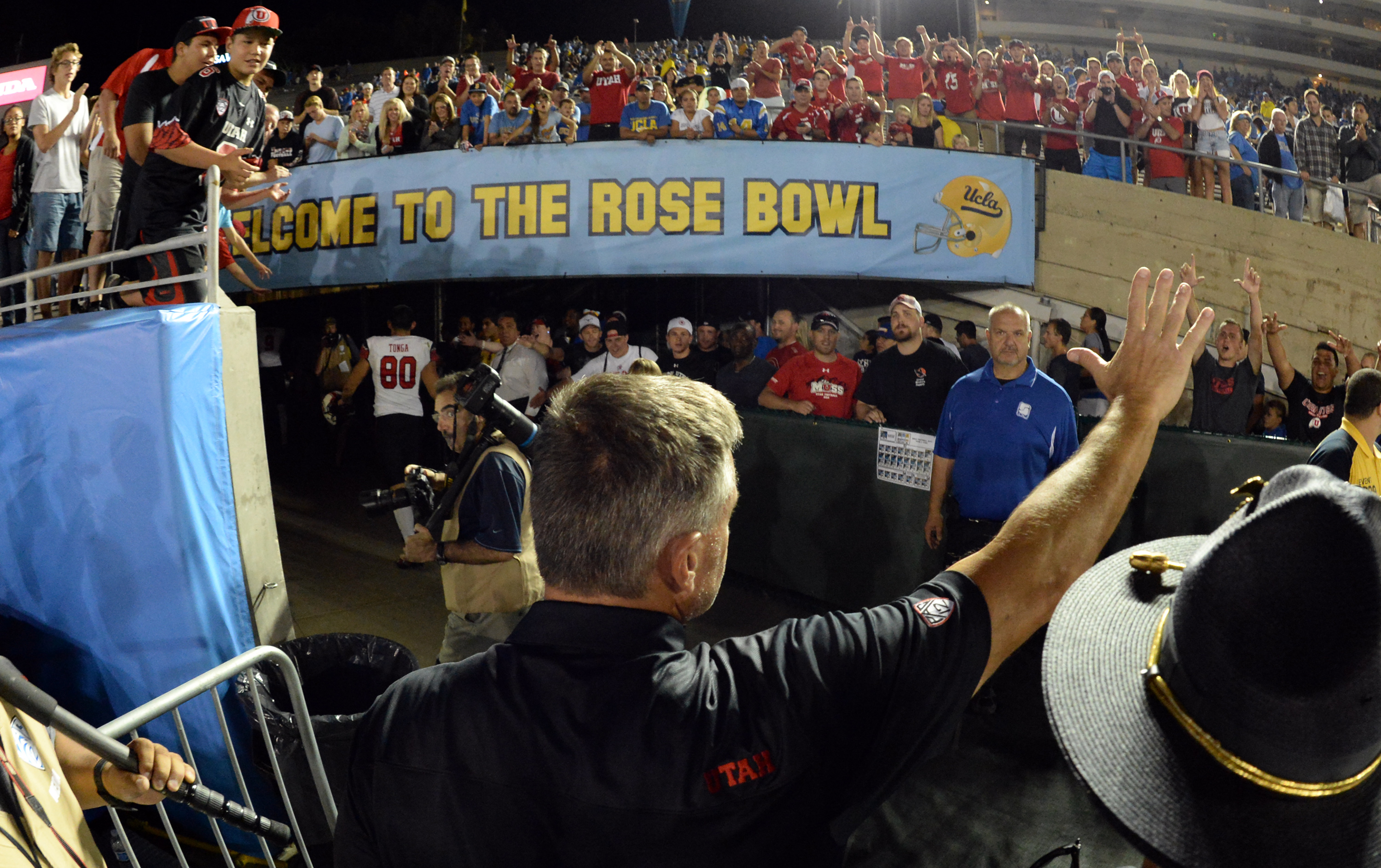 Scouting report: Now in his 11th year at Utah, head coach Kyle Whittingham needs just one more win to secure his best conference record since his program joined the Pac-12. … The Utes have only allowed eight rushing touchdowns this season. No one in the Pac-12 has given up fewer than 14. Their pass defense hasn’t been as stingy, allowing 7.0 yards per attempt (sixth) and 17 touchdowns. However, they do lead the league with 16 interceptions. … Utah ranks eighth in the Pac-12 in yards per pass attempt (7.2) and — somewhat surprisingly — ninth in yards per carry. But no other tailback in the country is within even 20 carries of Devontae Booker’s FBS-high workload. … The special teams unit isn’t as exceptional as it was last season, but reigning Ray Guy Award winner Tom Hackett is still around. He is third nationally at 47.1 yards per punt. … Utah hasn’t lost a home game yet this season, and set the top-two attendance records in Rice-Eccles Stadium history against Michigan (47,825) and Cal (47,798).

Series history: UCLA has a 10-3 all-time record against Utah, but the two teams have split their four meetings as Pac-12 opponents. The Bruins won by a touchdown in 2012 and 2013, while the Utes survived by two points last year.

» USC cornerback Josh Shaw sprained his ankles saving his nephew from drowning during a family social on Saturday. Remarkably, Shaw leaped off second-story balcony when he saw the 7-year-old struggling, landing on the concrete before crawling into the pool.

UPDATE: Serious doubts about Shaw’s story have surfaced, and USC is investigating further.

» Anu Solomon officially became Arizona’s starting quarterback, marking the first time since freshmen became eligible in 1972 that the Wildcats will open the season with one behind center.

After abruptly deciding to transfer out of UCLA on Monday, defensive end Kylie Fitts could be headed north.

According to the Fresno Bee, Fresno State received a release that will allow them to contact Fitts. The former four-star recruit could also end up at San Diego State or Montana State.

A star at Redlands East Valley, Fitts was one of the state’s top recruits in 2013 and considered a coup for the Bruins after he decommitted from USC. However, he played sparingly as a freshman, making one tackle in six games before undergoing hand surgery in November.

In response of me leaving UCLA, I wanna let everyone know it's for personal reasons and nothing to do with depth or playing time issues…

“It’s his decision,” Mora said. “We wish him the best in wherever he goes and does after this. We’re just going to march on.”

Fitts wasn’t set to start after notching just one tackle in six games as a true freshman, but he most likely would have factored into the team’s two-deep depth chart.

Originally a verbal commitment to USC, he flipped to UCLA in dramatic fashion when the Trojans wouldn’t allow him to enroll early. END_OF_DOCUMENT_TOKEN_TO_BE_REPLACED

UCLA football is officially back.

In the Daily News this past weekend, I covered a few of the questions that UCLA answered in spring and will look to answer starting today.

With training camp kicking off at Cal State San Bernardino at 3 p.m., here are five players to watch out for through the next couple of weeks.

Head coach Jim Mora said the prime objective for UCLA’s defense will be replacing the pass-rushing void left by Cassius Marsh and Anthony Barr. The latter’s most natural successor is Orjioke.

Still just 19 years old, the junior has off-the-charts athleticism but hasn’t quite turned that into on-the-field stardom. That started to change this past spring, when he started blowing past blockers on a more regular basis. He’ll be fun to watch if he keeps it up this fall.