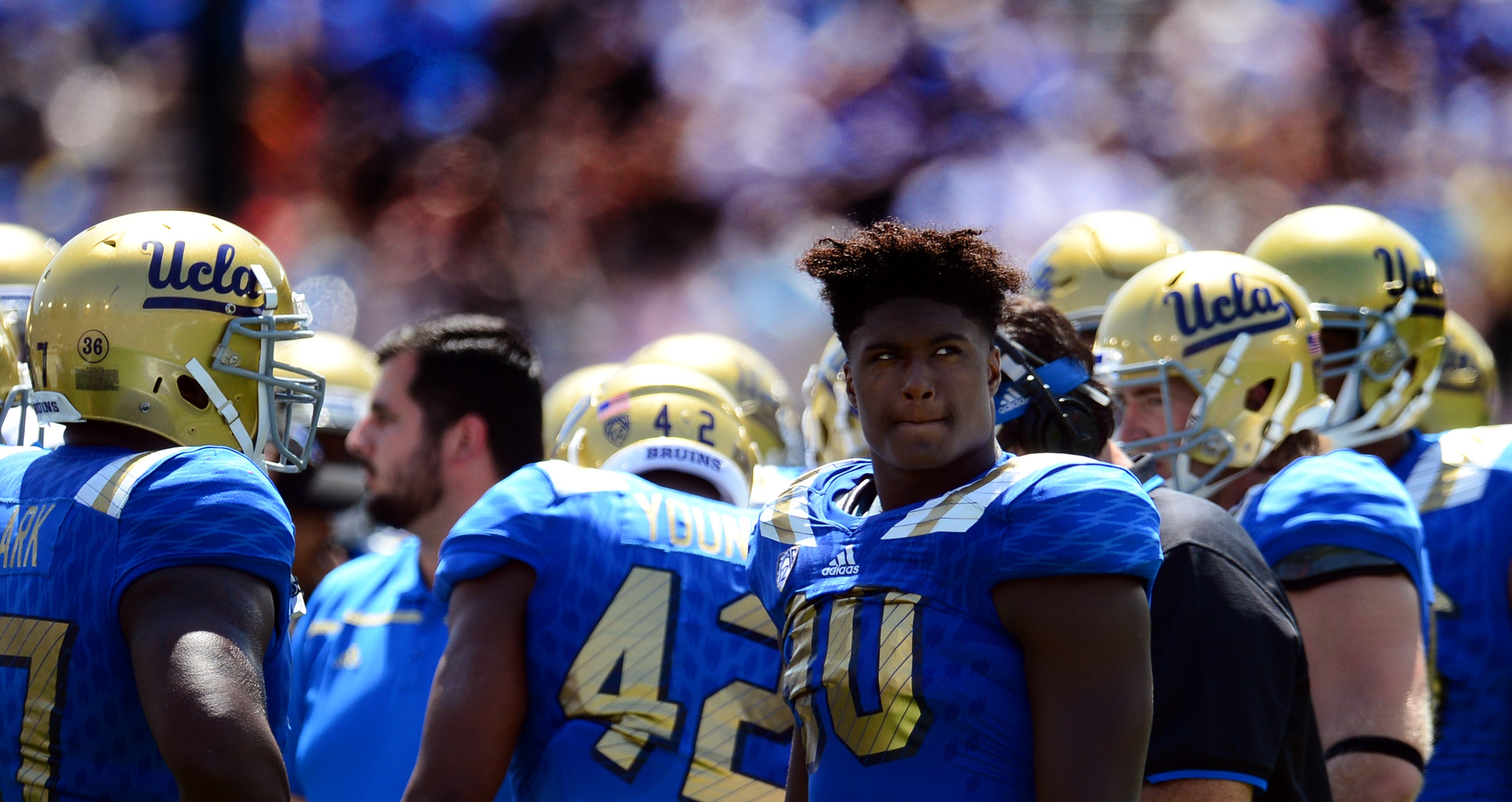 After missing most of the 2015 season, former UCLA linebacker Myles Jack (30) is trying to become one of the top players taken in the 2016 NFL Draft. (Keith Birmingham/Staff)

Myles Jack won’t be a full participant in this week’s NFL combine, but that doesn’t mean he’ll last long in the 2016 draft.

According to NFL Networks analyst Mike Mayock, the former UCLA linebacker looks like a top-10 pick — as long as he is medically cleared after tearing his lateral meniscus back in September. Jack recently told ESPN that he will do the bench press and interview with teams in Indianapolis, and expects to be fully cleared for drills early next month.

Expected to be an All-America candidate as a junior this past season, Jack injured his knee after appearing in just three games for the Bruins.

“Even though his season was cut short by injury this year, the tape I watched I saw a different guy this year than in past years,” Mayock said. “He was more physical, more confident in his physicality, able to come down and take on guards, tackles, fullbacks. I saw a guy that was more of a finesse player earlier in his career turn into a true linebacker this year.”

One of nine UCLA players invited to the combine, Jack is unquestionably the program’s top pro prospect. Defensive tackle Kenny Clark is the only other player in the conversation to be a first-round pick.

That Jack proved himself to be a powerful college tailback as well — rushing for 380 yards and 10 touchdowns in his first two seasons — only makes him more attractive to NFL franchises, even if they have no intention to use him on offense.

“The more you can reinforce to yourself that he’s highly athletic and adaptable,” Mayock said, “the more you’re gonna like him.”

On-field workouts for quarterbacks are scheduled for Saturday, along with those of running backs and wide receivers. Hundley remains in the second-tier of what is widely regarded as a thin quarterback class, behind potential top picks Jameis Winston and Marcus Mariota. END_OF_DOCUMENT_TOKEN_TO_BE_REPLACED

The can’t-miss moment of the NFL Combine was SBNation’s glorious video of linemen running the 40-yard dash to “Chariots of Fire.” UCLA’s Jeff Baca makes an appearance 20 seconds in. Watch it if you haven’t already.

If you’re looking for something more substantive, here are the results from the Bruins’ workouts. END_OF_DOCUMENT_TOKEN_TO_BE_REPLACED