“To bring a coach of Tom Bradley’s caliber to UCLA is very exciting,” head coach Jim Mora said in a statement. “His knowledge of the game, extensive experience, level of intensity and attention to detail all make him one of the best defensive teachers in college football.

“Combine that with the fact that he has strong national recruiting ties and is one of the most well respected coaches in the game — it all adds up to Tom being a tremendous addition to our staff.” END_OF_DOCUMENT_TOKEN_TO_BE_REPLACED

UCLA’s relatively quiet search for a defensive coordinator isn’t the team’s only job opening. The Bruins have also let go of outside linebackers coach/special teams coordinator Mike Tuiasosopo, who served that position for just one season.

Tuiasosopo never looked like a great fit on UCLA’s staff, and if you had polled observers way back in August, he would have been the one least likely to keep his job at the end of the year. His background lay mostly in coaching defensive lines, and although he was nominally the special teams coordinator, those duties were split between different members of the staff.

So who’s up next? If Jim Mora decides to keep it in-house, the most logical choice would be Scott White, a former graduate assistant who assisted with coaching linebackers the past couple of seasons. 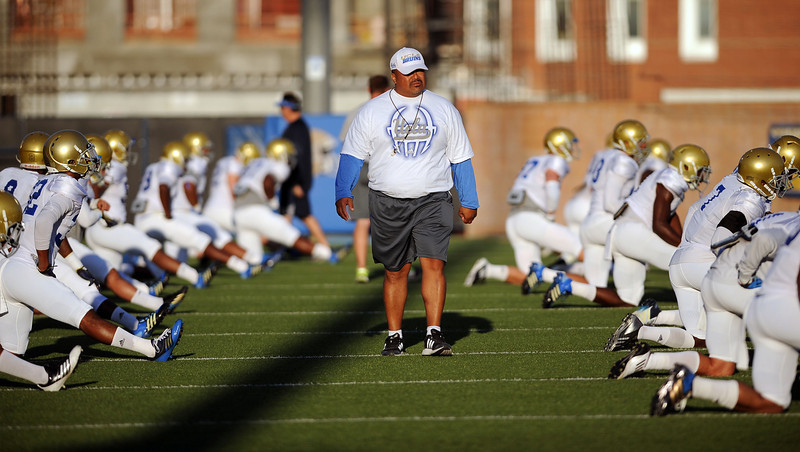 Officially, Mike Tuiasosopo is in charge of coaching UCLA’s outside linebackers and special teams. Practically speaking, the latter role is more muddled.

Back in April, head coach Jim Mora said that his newest assistant coach was “still feeling his way through special teams.” Under former linebackers coach and special teams coordinator Jeff Ulbrich, the Bruins became one of the best kick and punt return coverage units in college football. Tuiasosopo doesn’t have that type of resume.

According to Tuiasosopo himself, special teams is still coached by committee. END_OF_DOCUMENT_TOKEN_TO_BE_REPLACED

Spring football is done, and over three months still stand between us and the start of UCLA’s third season under Jim Mora — one that comes with national title aspirations and accompanying media glare. This blog has covered the status of each position group moving forward. Last in the series is …

Recently, special teams hasn’t been a major concern for UCLA. Over the last two seasons, the team blocked 12 kicks and punts — an FBS total matched only by Rutgers. Last year, it ranked top-20 in both opponent punt and kick returns; in four of the five years prior, the Bruins ranked outside the top 40 in the former and the top 100 in the latter.

A key difference looms heading into this fall: Jeff Ulbrich is no longer the UCLA special teams coordinator.

Promoted the defensive coordinator, Ulbrich will continue coaching inside linebackers but surrenders lead oversight of the unit that helped extend his own professional career. Outside linebackers will be charged to new assistant Mike Tuiasosopo, who also holds the title of special teams coach. END_OF_DOCUMENT_TOKEN_TO_BE_REPLACED

New outside linebackers coach Mike Tuiasosopo talked to the media on Wednesday about his first first two months at UCLA, as well as the first time he met Jim Mora (in 1997) and what he thinks of his players.