END_OF_DOCUMENT_TOKEN_TO_BE_REPLACED

— False starts continue to be a problem under the new snap counts, and Mora attributed it to “a lack of concentration.” The head coach noted that the problem generally improves as practice goes on, so he would like to see better concentration at the start of the session. Offensive lineman Kenny Lacy was probably the most penalized player on Saturday and spent a large amount of time running laps for false starting. END_OF_DOCUMENT_TOKEN_TO_BE_REPLACED 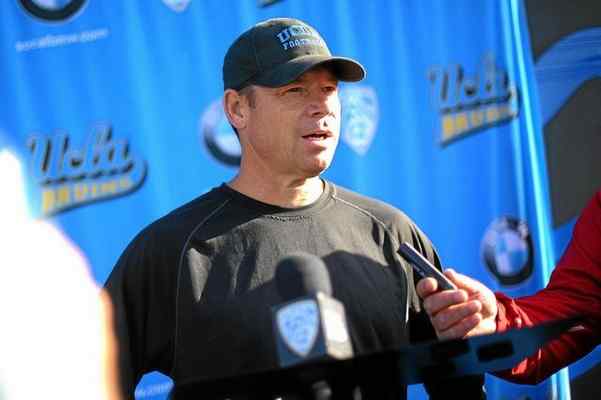 One day down, 14 more to go. Here are a few observations and notes to pass along from the first day of spring practice.

Read the notebook from the first day of camp, focusing on Jim Mora’s aversion to the “pro-style” label.

— A prominent storyline of the spring will be how the offense progresses under new offensive coordinator Kennedy Polamalu. Whether the scheme is that much different than what Noel Mazzone had can be debated, but Jim Mora is adamant that it’s not as different as everyone’s making it out to be. The changes include a different snap count and an increased amount of time you’ll see Josh Rosen under center. The snap count changes made for an ugly first period of scrimmaging as there were likely more false starts than completed passes.

— Indeed there will be tight ends and fullbacks in this offense. At least one tight end was in almost every set. Nate Iese seems to be a top option right now, as the former fullback lined up with the No. 1 offense during the scrimmage periods. Giovanni Gentosi also lined up at tight end. Cameron Griffin and Ainuu Taua took snaps at full back.

— Mora said there were 20 snaps of a 3-4 defensive front during practice and downplayed the hubbub about making a big change to a 4-3 defense. He said the team played about 50 percent of its snaps with four down linemen last year, so it’s not a look the Bruins are unfamiliar with, he stressed. However, linebacker Jayon Brown said after practice that the team is focusing on the 4-3 front more in an effort to be better against the run.

— Freshman wide receiver Theo Howard had likely the catch of the day, making a great adjustment in the air to catch a back-shoulder pass over a defender.

Juarez worked into the second string linebacking unit, playing as an outside linebacker. He dropped into coverage and came off the edge. Mora said the North Torrance High alumnus did not look out of place, which is a good thing for an 18-year-old who just started college within the last 36 hours.

Molson connected on all four of his field goals.

— DB Fabian Moreu, DB John Johnson, DL Eddie Vanderdoes, WR Mossi Johnson and OL Tevita Halalilo were all limited in practice as they’re working back from injuries. They worked out individually on the side of the field.

Tell me what you’re most curious about in practice and I’ll try to keep my best eye on it for the coming days.

Up next: Day 2 of practice, Thursday, 7 a.m., intramural field

A few local members of UCLA’s massive 2016 recruiting class talked to LANG reporters yesterday about why they decided to pick the Bruins.

The North Torrance High star announced his decision on Wednesday afternoon, picking up a UCLA hat over Alabama, Ole Miss and BYU. He is just the second top-10 consensus national prospect to join the Bruins during Jim Mora’s tenure, following quarterback Josh Rosen.

Juarez was a two-way threat in high school, and could quickly fill the type of dynamic role that Myles Jack did at UCLA for a little over two seasons before tearing his meniscus this past September.