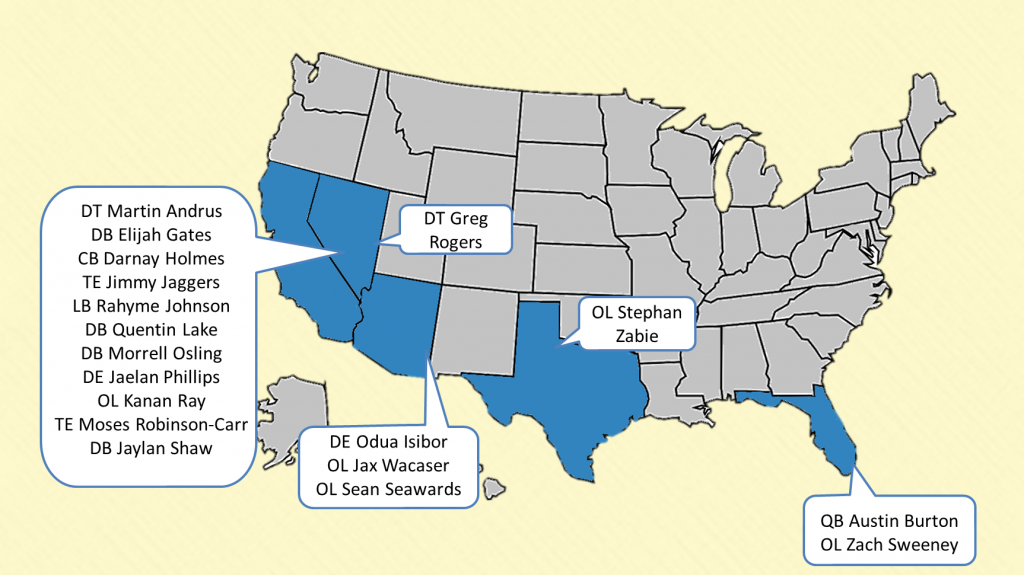 The group, headlined by defensive stars Jaelan Phillips and Darnay Holmes, is ranked 21st in the country by Rivals and Scout and 18th by ESPN. It addressed several needs for UCLA (defensive line, secondary, offensive line), but lacks many playmakers on offense.

Mora said the staff felt confident in its young roster at running back and receiver, which was why the Bruins didn’t end up signing anyone at those positions. The coach admitted the staff was targeting one receiver who ended up falling through. UCLA returns all five running backs who took carries last year and lost only Kenny Walker and Ishmael Adams from the receiving corps.

UCLA graduated six regular starters on defense, including three on the defensive line. Adding Phillips, Odua Isibor, Greg Rogers and Martin Andrus was an important step in reloading the unit.

“I think our potential is limitless,” Phillips said of the defensive line recruits. “I think we can do a lot of great things together. Obviously it’s this 2017 class, but it’s people in the last class, it’s people in the class before that. … I think it’s going to be special.”

In the secondary, UCLA lost Fabian Moreau, Randall Goforth, Tahaan Goodman and Marcus Rios. Holmes leads what is likely one of the best defensive back classes in the country. Of UCLA’s four other defensive backs, two are four-star recruits according to Scout (Elijah Gates and Jaylan Shaw) and two are three-stars (Quentin Lake and Morrell Osling).

“We definitely have a great class coming in,” Holmes said. “It’s probably the best defensive back group I’ve played with in my whole entire life. I just can’t wait to compete against these guys each and every day and get to working with them after practice.”

The Calabasas High product is especially excited to join Gates, his childhood friend, in the defensive backfield after they played pop warner football together.

“We have some championships to get,” Holmes said with a smile.

Links to wrap up the Signing Day coverage:

Tight end Jimmy Jaggers talks about the impact Jedd Fisch had on his recruiting, how he expects to help the team in the future and his relationship with the other tight ends.

Cornerback Darnay Holmes talks about making the adjustment to college as an early enrollee, his friendship with Elijah Gates and whether he might get some time on offense in the future.

Head coach Jim Mora spoke to the media Wednesday about his new recruiting class. (Had to break it up into two videos)