UCLA’s season fizzled out on Wednesday night in Las Vegas, with the Bruins losing a third straight game to USC for the first time since 1942.

Some more milestone from the 95-71 loss in the Pac-12 Tournament, one in which Steve Alford’s team never looked competitive …

» USC’s point total was its highest-ever in the rivalry, passing the 94 points it scored in an eight-point loss to UCLA in 1979.
» The 24-point margin of victory was USC’s largest since a 28-point win in 1945.
» The Trojans’ three wins against the Bruins this year came by a combined 57 points. They had not won two rivalry games by double digits since 1938.
» USC’s average halftime lead in those three games was 16.

“Bad year’s probably an overstatement. It was a bad two-and-a-half months, bad league play. And that’s what it was. I think I’ve got the players’ attention. We’ve got a tremendous recruiting class coming in that we’re excited about. … So it’s back to work. It’s getting us back to the level of excellence that is required.” 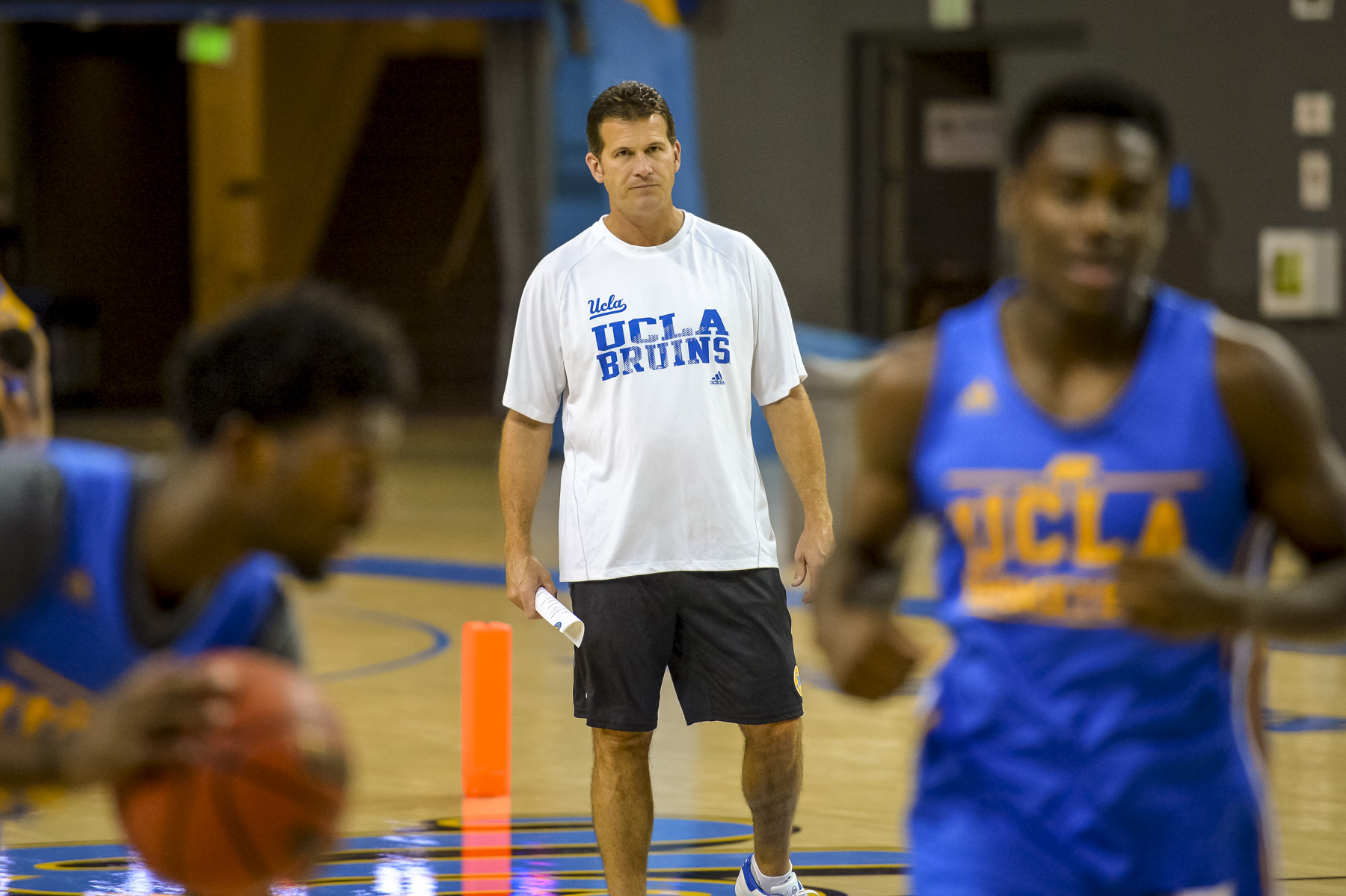 Some fans have called for UCLA to fire third-year head coach Steve Alford (center) due to the Bruins’ disappointing 2015-16 season, but Pac-12 Networks analyst Don MacLean says it’s too early for that conversation. (David Crane/Staff)

The UCLA men’s basketball team heads into the Pac-12 Tournament mired in one of the most disappointing season in program history, with its 15-16 record making even an NIT invitation very questionable. Perhaps further dimming the Bruins’ chances at a late-season run is their next opponent.

Steve Alford’s 10th-seeded squad will tip off at the MGM Grand Garden Arena at 6 p.m. tomorrow against USC — a team that has comfortably won the last two games in the crosstown rivalry. Pac-12 Networks analyst Don MacLean answered some questions about the Bruins, including what he thinks of Alford’s job security.

Q: What are your impressions of UCLA’s first-round matchup against USC, especially given the results of their past two meetings?

A: “Overall, you wonder where UCLA’s head is at. They haven’t looked good coming down the home stretch here. They’re a No. 10 seed. They’re not going to get into the NCAA Tournament. But what I’m looking for is for them to kind of hit the reset button, and see if they want to try and make a run in this Pac-12 Tournament. So to that degree, I don’t think it really matters who their first-round opponent is. To me, it’s more about their spirit and their will, and if they want to finish out this season the right way. They have underachieved. I think they know that. They have the talent to be better than they are.”

Q: A couple of weeks ago, you said you wouldn’t be surprised if UCLA won the Pac-12 Tournament. Do you still think that? END_OF_DOCUMENT_TOKEN_TO_BE_REPLACED

UCLA lost their fourth straight game on Saturday, an ugly 86-82 decision against Oregon State that came despite the Beavers being without starting forward Tres Tinkle.

The Bruins finished the regular season with a 15-16 record and 6-12 in the Pac-12 — their worst conference mark since 2002-03, which was the final year of the Steve Lavin era. This loss also sets up a rematch in the Pac-12 Tournament against seventh-seeded USC.

No. 10-seed UCLA, which has already lost twice to the Trojans by 33 combined points, will tip off against its crosstown rival again on Wednesday at 6 p.m. at the MGM Grand Garden Arena in Las Vegas.

LAS VEGAS >> That UCLA beat USC in the Pac-12 Tournament wasn’t much of a surprise.

That Isaac Hamilton was the Bruins’ best offensive player? Well, this was new.

The sophomore guard scored a career-high 36 points in a 96-70 decision over the Trojans on Thursday, one that punched a ticket to the Friday’s 6 p.m. semifinal against No. 1-seed Arizona.

It was an astounding performance, particularly for a player who entered the MGM Grand Garden arena averaging 10.1 points per game. Hamilton had only topped 20 points once in his career. In four of his last eight games, he hadn’t even scored in double digits. END_OF_DOCUMENT_TOKEN_TO_BE_REPLACED 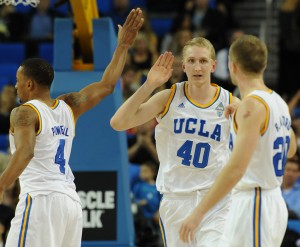 Thomas Welsh (40) celebrates with Norman Powell (4) and Bryce Alford as UCLA defeated USC 85-74 on March 4, 2015. The teams could face each other again in Las Vegas. (John McCoy/Staff)

UCLA finished its regular season on Wednesday with a win over USC, leaving the Bruins with nearly eight days until their first game in the Pac-12 Tournament.

They now know who they’ll likely face next Thursday at 2:40 p.m. Arizona State clinched the No. 5 seed today when it beat Cal and Stanford lost to Arizona. That matches the Sun Devils up against the 12th-seeded Trojans on Wednesday at the MGM Grand Garden Arena; the winner will advance to face No. 4-seeded UCLA.

USC only has five conference wins in two seasons under Andy Enfield, none of which have come against their crosstown rival. ASU beat the Bruins in their only meeting this year, taking a 68-66 decision in Tempe.

If UCLA wins that Thursday game, it will almost certainly draw No. 1 seed Arizona in the semifinals — assuming that the Wildcats dispatch either Cal or Washington State. An upset by the Bruins to reach the Pac-12 title game would move the team off the NCAA Tournament bubble.